Pokémon has been a major part of my childhood ever since it exploded on the scene with Red, Blue and Yellow versions on the Game Boy Color. Back then the game was simple, time consuming and fun. In other words, everything you want in a good game. Then the franchise took off and the series, much like the Pokémon themselves, evolved. Spawning new types and new worlds to explore.

This all came with the introduction of the mobile game Pokémon Go a few years ago. That mobile game allowed players to catch Pokémon in their environment and encouraged exploration. Some fundamentals were changed due to Pokémon Go being a mobile game, such as how battles are performed. In Pokémon Go you just tap the screen for quick attacks until your charge attack is ready. All of the battles happen real time rather than traditional turn based RPG style that we know. 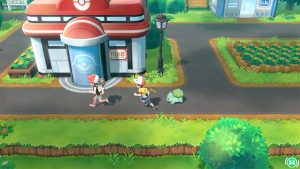 Why do I bring up Pokémon GO? Well, Let’s Go Eevee/Pikachu incorporates some of Pokémon Go into the game play. Before I get to that, I will start at the beginning. Pokémon Let’s Go is essentially a repackaging of Pokémon Yellow version. Yellow was the only game in the series, until very recently, that allowed your Pokémon (The Pikachu you start with) to follow you around on your adventure. Whichever Let’s Go you choose, you will always have your starter Pokémon with you. In addition, they really went back to basics with this game. Pokémon have no abilities, breeding was removed and it’s just first generation Pokémon. 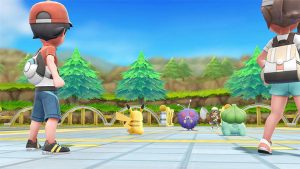 There are some major changes that bother me as a longtime player. The first is Let’s Go is different than any other non-phone game in the series as battles give precious little experience. How do you get experience you ask? Catching Pokémon, preferably the same one back to back to get a “chain bonus.” That’s right, you want to strengthen your party? Be prepared to catch the same Pokémon over… and over… and over… and over again. Yeah, battling things in the wild was a grind, but it didn’t feel as tedious as constantly trying to catch Pokémon non-stop. 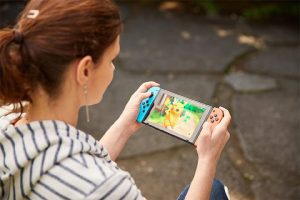 Breeding being removed is the one that got me the most annoyed. Fellow reviewer Vincent Mahoney and I are both mad scientist types who like to breed our party to get the best stats we can. Now that has been removed and replaced with a judge feature that simply gives you a breakdown of projected stats and that’s it. It really hollowed out the gameplay that already was kind of disappointing. I fail to see what removing breeding did to improve the game. It could have been left in the game without really breaking it. 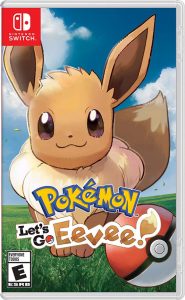 Your starter Pokémon will be your best Pokémon, without a doubt. There are some pretty unfortunate drawbacks like you can’t evolve your starter. That’s right ladies and gentlemen, you cannot evolve your starter Eevee into anything. They make up for it by giving it God stats that allow it to beat pretty much anything.

I bet my wife that I could solo the game with our starter Eevee, and will likely try that as another play through. Both starters do learn special moves to help compensate with being unable to evolve. Whoever named Eevee’s moves needs tarred and feathered because they are the dumbest things I have ever heard. Some examples are, and I’m not making these up, Buzzy Buzz, Baddy Bad and Sizzly Slide. Perhaps they are alliteration homages to the late, great Stan Lee. 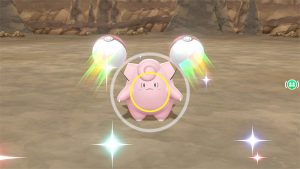 Grumbling aside, the game is still very fun to play and they keep it true to the original games, but also modernize the story. Essentially, this game should be considered generation 1.5. There is still playability after the credits roll once you beat the elite four, and trading and battling with other players still exists. You can have a save for each profile, which saves money from buying multiple games. There is also a lot to build off of if you play Pokémon Go. 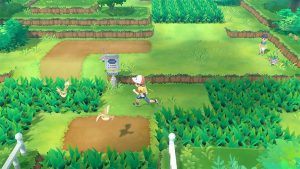 In addition, if you buy the Pokéball peripheral (It will set you back fifty dollars or so) you get to add Mew to your game. Also, you can place Pokémon from Let’s Go in the ball to walk with you and gain experience from your Pokémon Go game. Your Pokémon will also collect Pokestops for you in the game to help you out. It’s a major part of the gaming experience, I just hate that it sets you back almost the cost of the game to get. 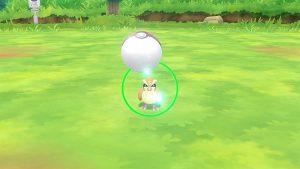 To be honest, I like the game and I don’t regret buying it at all. My wife loves it and now sees the shortcomings of Pokémon Go, since her only Pokémon experience was Pokémon Snap on the Nintendo 64. That said, I felt this game could have been so much more. Like a father of a teenager would say: I’m not mad, I’m just a little disappointed.