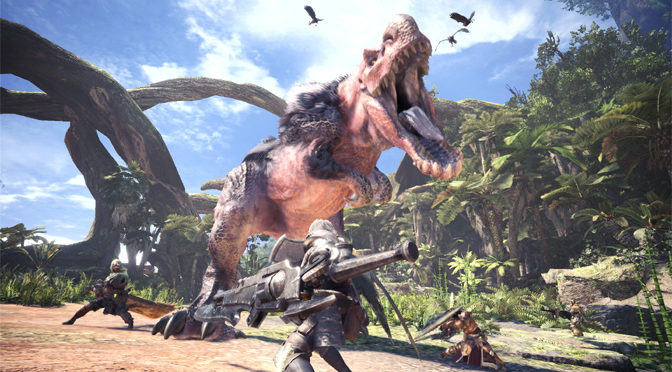 Monster Hunter has always been a game about choices: What leggings do I make from my incredibly precious resources to make turning other monsters into leggings easier, what armor skills should I build toward, and probably the most common of all, “What was I thinking when I thought I could attack through that?” Monster Hunter World is the latest iteration in a game series about, you guessed it, hunting monsters. A series notorious for featuring extensively archaic design choices attempts to reach a wider audience with this iteration – so does Monster Hunter World shake off the dust, or is this one fossil you shouldn’t waste time gathering? Let’s find out. 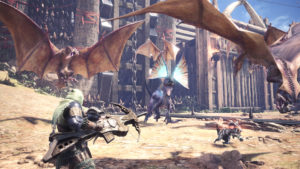 As the name suggests, this is a game all about hunting monsters. Every quest will, in some manner, be about fighting or capturing small or large monsters. Some quests may send you out to gather specific items and deliver them back to the hunter’s guild, and in these missions hunting monsters is only optional even though many times large monsters show up in these missions as an obstacle that must be overcome to deliver the requested items back to the camp’s supply box. To explain what the large monster fights are like to those completely unfamiliar with the series: This is a game of intricately designed boss fights that you take on in succession.

A lot of players may draw similarities to Shadow of the Colossus, especially given its recent re-release, though the battles in Monster Hunter World are smaller in scale. Properly setting up your item pouch with the necessary recovery and buff items, gearing up your character, etc., goes hand in hand with learning each monster’s individual attack patterns and overcoming them. It’s an incredibly satisfying gameplay loop of get pants → find monster → fight monster by learning its attack patterns and hitting it whenever opportunity strikes → make new pants out of monster. If you don’t get enough of the necessary items to craft new weapons or pants out of the monster, repeat the first few steps, sharpening your skills all along the way.

[amazon asin=B071G5HZ7F&text=Fellow hunter, begin your epic adventure within Monster Hunter World with an Xbox One or PlayStation 4 physical or digital copy from Amazon!] 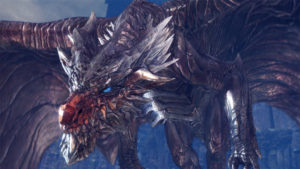 If that’s a little too vague for those who have never played the series before, Monster Hunter World basically plays like this: You’ve been hunting a fearsome creature for at least ten minutes now, the once ferocious prey is now weary, ready to drift off to sleep in its den to recover from the wounds inflicted upon it. You slowly creep up on the target as it lay sleeping and ready yourself- how should you best wake this target? Perhaps this time you’ll lay out some bombs, to awaken the beast with hellfire. Maybe you’ll unsheathe your Greatsword with a perfectly placed charge attack right on its face, potentially breaking off a horn that you might be able to obtain later. Maybe both of you will get blown up by a draconic version of a B-52 bomber that drops exploding scales all over the place, blowing you up and then sending you back to camp because you fainted due to Bezelgeuse having to ruin everything good and right in the world. 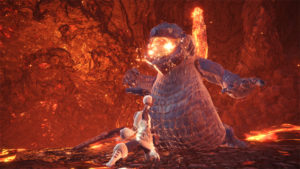 The game really is straightforward, for whatever its worth. Players will hunt monsters, collect items, and craft new gear and items. If the player has a hard time overcoming a new monster, you can go back and farm for even better gear to handle the task at hand. This small loop converts into hundreds of hours of gameplay due to the intricacies of every other system in the game. Monsters aren’t simple foes that you hit a few times to overcome- these are multi-stage fights against beasts that commonly tower over your hunter and can fire laser beams out of their faces. Sometimes players will have to do research on the monster itself to identify and abuse monster weaknesses and to shore up weaknesses that the hunter may have.

For example, the Anjanath is a fire-breathing tyrannosaurus rex that will burn you alive if it gets the chance. Tackling this monster with weapons that are of the fire element or armor that has a significant fire weakness can quickly result in your hunter getting charbroiled. Even with all the preparation a player can do, it will still commonly take between 10 to 30 minutes to defeat a newly introduced monster, so a lot of these hunts are highly interactive tests of endurance. 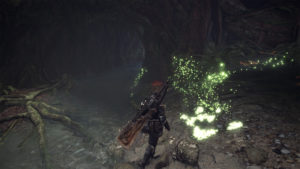 Each monster has its own attacks, and several have their own unique mechanics. The Barroth and Jyruratodus can cover themselves in mud and harden it like armor, so weapons that aren’t of the highest sharpness might bounce off of their shells, leaving you open to follow-up attacks. The Barroth, in particular, can shed the mud on his hide, leaving pools of hunter-height mud that will restrict your movements or trip you up should you come into contact with it. Some monsters may paralyze you, some may poison you, and others may catch you on fire and toss you around in the air with their claws. Notwithstanding that each monster can also briefly adjust its attack patterns when enraged, which can knock you out and cause you to fail quests if you’re not prepared for the flying wyvern Rathian to do the somersault attack with her poison-tipped tail twice in a row. 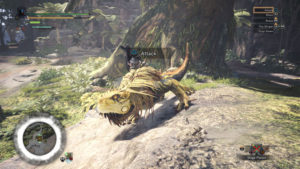 So it’s been established that the monsters are unique killing machines, but what of your tools to stop them from hunting you? Well, it’s a good thing you asked (or that I asked for you), because there are fourteen different weapon types in Monster Hunter World, each with its own unique mechanic, move-set, and purpose. Mastering the use of even one of them takes hours upon hours of dedication, and players can forge then upgrade these weapons with parts of defeated monsters until the very end of the game.

The weapons all control completely differently from one another, and that can’t be understated: Dual blades are low damage but fast hitting weapons that are capable of moving in and around monster attacks with ease, while the charge blade takes a fair amount of dedication to learn but has a devastatingly powerful counter attack. The hammer is perfect for stunning monsters by hitting them in the head with it repeatedly, while the heavy bow gun can load up different types of ammunition to inflict status ailments on monsters, slice off tails, even just knock over other players repeatedly to be a troll. 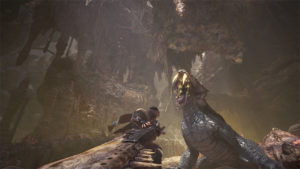 On top of the weapons, players can forge helmets, gauntlets, chest and leg armor, as well as charms, from the parts of slain monsters. Each of these pieces of equipment offer skills that can enhance different play styles, and acquiring the skills you want has actually never been easier in a Monster Hunter title. Contrary to previous titles, each skill will have levels in it that you can activate by acquiring only one point in the skill (you used to have to acquire a minimum threshold for a skill to be active, from as few as 5 to as many as 25). Around mid game, it’s not uncommon to see players decked out with quite the number of skills, which used to be a lot more rare in previous Monster Hunter games. 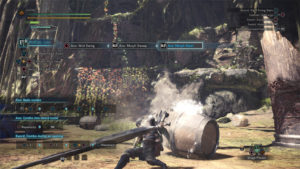 Speaking of things different from older Monster Hunters, a huge number of quality of life improvements have been introduced. Players no longer have to stop for 5 or more seconds every time you want to gather some honey. You can have Potions and other items craft automatically whenever you pick up the resources to make them. Hunters in the field can actually visit their item box, resupply, and even change equipment during a hunt. You can even fast travel to discovered camps when outside of combat on any of the five maps, which can make getting around significantly less of a chore.

There’s tons of activities to do outside of the main story quests, too. There are a large number of optional missions that unlock as you play, and tracking down monsters will give you limited-use investigation missions that offer high rewards in exchange for some penalty (typically limiting you to 1 faint or a stricter time limit). The Arena is also back, allowing players to take on monsters using predetermined gear setups- there’s no outgrinding the challenges in the arena! 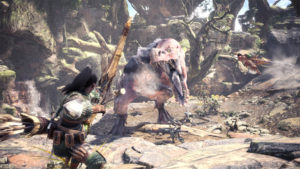 As far as graphics go, the visuals of Monster Hunter World are superb. Getting blown up by scales dropping from the sky, randomly, has never looked so good. Monsters that haven’t seen a glimpse of high definition before really shine in the new engine, and the environments are all extremely interesting and full of life (some of which you can capture in a net and keep as a pet!). The soundtrack is great, though it’s probably among the weakest OSTs for a Monster Hunter in a long while. Many of the monster-specific themes are gone, replaced with location-specific themes (so any monster found in The Rotten Vale will have the same song playing as you fight, which isn’t typical for the series). The elder dragons, and strangely enough the big bomber Bazelgeuse have their own musical themes, though several of them aren’t quite as memorable as what we’ve had in the past. 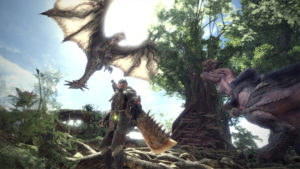 If there’s any one complaint with Monster Hunter World, it’s that the post-game is quite repetitive. After defeating the final boss, players will have the opportunity to hunt for Tempered monsters, which look roughly the same as their usual forms but deal much higher damage with no new attack patterns. To unlock Tempered monsters, players have to wander around the environments during expeditions or quests, looking for tracks the monsters left behind, and if you find enough you will unlock an investigation that lets you fight one a few times. Searching for these tracks is quite boring if you dedicate time solely to that, but it will take entirely too long to even obtain one investigation unless you do actually dedicate time to just tracking them. However, that’s a post-game activity, and there’s easily 80 hours of content before the game even comes to that. 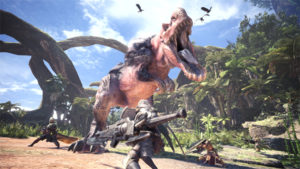 Overall, Monster Hunter World is an incredible experience. Those who appreciate difficult games with deliberate combat will find a lot to enjoy, as the game can be a significant time sink. If you’re a player who is easily frustrated when a game gets difficult or doesn’t like re-evaluating strategies, then this may not exactly be the game for you. The constantly rewarding system is incredibly addictive and anyone wanting a good, challenging game should definitely pick up Monster Hunter World.