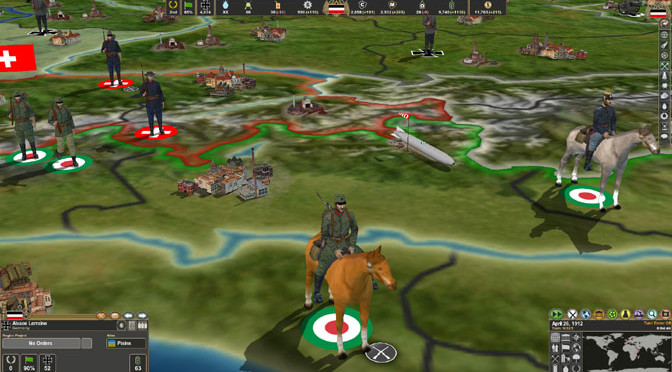 Like many gamers, World War II has always been one of my favorite genres to play in, and also my strongest point of knowledge. So I am prepared for anything those strategy games can throw at me. Muzzy Lane decided to switch it up however, by taking us back to a different time in history, leading up to World War I, or The Great War as it was known at the time.

Making History: The Great War takes us to a time when nationalism was at its peak. People believed in their country because it was where they were from, and that’s where a lot of arguments began and ended. Going beyond that, surprisingly, the political agenda of the various nations is eerily similar to the lead-up of World War II, though the starting positions are vastly different, as well as some of the names (of leaders and countries.)

My knowledge of World War I is severely limited compared to most other wars. Chemical warfare was first utilized in this war, as was trench warfare. What I do know wraps up with my country of ancestry assassinating an Austrian Duke and starting the war. In addition, the way the war was fought was very different from the mobile battles we engage in these days. It was very much about pushing massive formations a few miles forward and then digging in to try and prevent the enemy from pushing back. It was a defensive war of the highest order, and a virtual meat grinder for those unlucky enough to be caught on the front lines, which extended for hundreds of miles along the trench line.

Muzzy Lane was kind enough to grant me an early look thanks to the Steam early access program. While this preview is limited in that I could only play Germany or France, it did give me a glimpse of things to come. When complete, Making History: The Great War will become more like developer Muzzy Lane’s World War II game, Making History II: The War of the World where you can play any country that existed at the time, and try to change history in your own way, or at least survive it.

With early access I decided to try and play with Germany, which had one of the earliest scenarios available. Normally I use Serbia/Yugoslavia and enjoy taking a small nation and having them play a major role in the conflict. But its not easy on a shoestring budget. To suddenly have control of a giant country with plenty of resources and military power was a bit of a change.

I took the first turn to locate all of the territories under my control and begin planning on what to do. Since it was still three years before the war, I focused on my infrastructure. Over the entire first year I made one artillery unit for my military and nothing more. Making History forces you to balance out civilian and military properties. Thankfully, almost all buildings you construct can have a converted military purpose. In one turn you could change out your textile factory from the clothing industry to arms manufacturing. You just have to do it in time to make a difference, but also continue to make civilian clothes up to that point to keep your people happy. Finding that line takes skill and practice, and perhaps a little luck.

In addition to the ultra realistic industrial properties, diplomacy is a must. It is so nice to find a game that doesn’t gloss over diplomacy. As much as a normal player would love to march into a country and seize it, you just can’t. The political and economic consequences of such an action may be too much to justify the cost. Even if you win the battle, you might end the war, or start it well before you are ready. I stared down Luxembourg and thought “I can easily take it” so many times it almost became a song. Good sense prevailed as I left them alone, knowing the amount of political flak, and possibly literal flak, that would come my way should I crush them.

I played things different than Germany did historically, which was a real treat. In fact, I mostly played on the defensive. With games like this I am very cautious, and usually focus on my technology rather than trying to win quickly. But even in my passive and defensive stance, I still eventually got drawn to war. The political climate of the time makes war more or less inevitable. The battles that raged were most often bloody stalemates.

And that’s the cool thing about Making History: The Great War. It’s so much more than just a war game. It actually teaches you history. Want to know why Germany ended up in World War I, then play Germany and try to stay out of it. You’ll quickly see why that is so difficult.

As a complete package, Muzzy Lane did a great job with the music in this title. A smooth soundtrack lends nicely to the tense atmosphere. I have yet to play a Muzzy Lane game with awkward music. It’s a period soundtrack too, so it really helps to take you there.

Making History is a very challenging title. You won’t breeze right though this one with a simple tank rush. To win, or even survive, you’ll need to master diplomacy, governing and yes, military strategy. And you will likely learn something while you play too, so that’s a pretty cool bonus.

Whether you want to recreate The Great War or put your own spin on it, Making History: The Great War allows that. Once the full game is available, I plan to jump back in and start working with some of the smaller countries again, including my beloved Serbia/Yugoslavia. But from what I’ve seen in early access, all signs point to yet another fascinating strategy masterpiece.