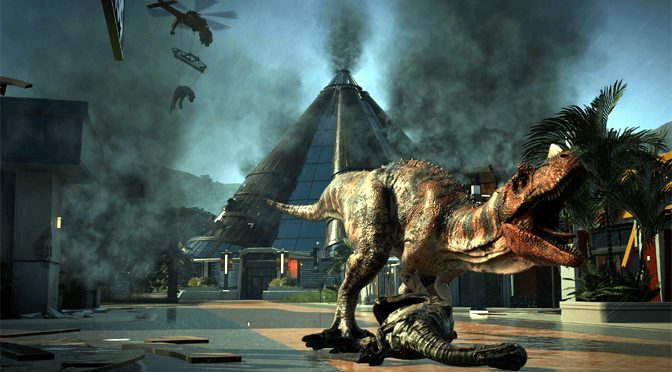 Jurassic World Evolution is a hardcore economic simulation game. If you were expecting a lot of dinosaurs raging through your simulated park, you’re going to have to grind through a lot to get there. You will get there. It just won’t be quick.

The game starts off with Jeff Goldblum telling you all about the five islands that make up the Jurassic World park you’re now in charge of. He also gives you a lot of ominous talk about past failures. It would be funny if there was an option to just turn around the helicopter and go home which would end the game and trigger the credits, but there isn’t. There are other actors from the films in the game (no not Chris Pratt) but Jeff Goldblum is the most recognizable. He usually chimes in with grim predictions about playing god, but who cares? It’s a simulation. It’s all about playing god. 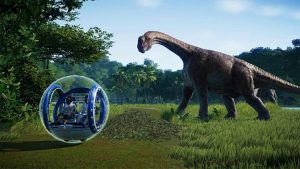 Anyhoo, you start off on a simple island to learn how to run the joint and how to balance out your contracts so that you don’t piss off your entertainment people in favor of your science people but you don’t let your science people skimp on security and get you all killed. Yeah, it’s like that. Jurassic World. You’ve seen the movies. 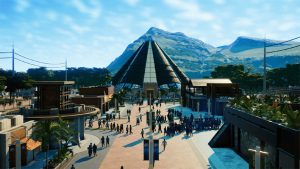 The good of the game is that the graphics are awesome and the dinosaurs look really cool and you can see them up close and personal. The park building aspect is also good, although, it’s been awhile since I played a big sim like this and I could have used a little more hand-holding in the beginning. However, for those of you who routinely play this kind of game, you’ll probably appreciate the lack of hand-holding.

[amazon text=Think you can do better than everyone from every movie? Then get a copy of Jurassic World Evolution from Amazon.&asin=B07C4SGGZ2] 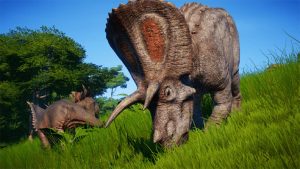 It would be nice if that was an option though or if the help feature was a little more remedial. The lab stuff is fairly straight forward and easy to understand as is the entertainment component. Security is also easy to understand. Try not to get everyone killed. Got it. I liked the competition among the different divisions trying to get your attention and budget. I like the kind of logistical problems this sim presented. Trying to get enough dinosaurs to really attract visitors while keeping them safe is an interesting balancing act. So, then it’s just about making dinosaurs and attracting visitors while watching your bottom line. That goes on for a really long time. A really long time. Hours and hours. 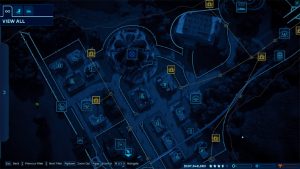 Which is the drawback of the game for me and what makes it a hardcore simulation for diehard simulation fans. There is no fast-forward mechanism in this game, so there is a tremendous amount of grinding on DNA extraction, waiting for science teams to bring back fossils, and that sort of thing. Making money isn’t difficult in JWE, but it isn’t quick either and the inability to set everything up and then just let it fast-forward for a few minutes was very frustrating to me. 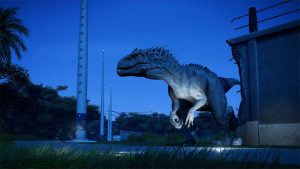 It started to feel too much like a job and not enough like a game. I recognize that really realistic simulations can feel a lot like a job and sometimes I really enjoy that. After all, I’m a writer, not a city planner, so doing that job in SimCity was kind of cool, but I could fast-forward when I wanted something more interesting to happen and you can’t really do that in JWE. My only other issue was that the islands all kind of look the same which is not only unrealistic ecologically but kind of dull to look at after a while. 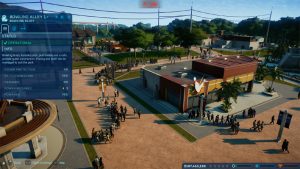 The dinosaurs, however, look amazing and they move well and being able to zoom in on individual animals and watch what they’re doing is really cool. It’s hands down the best part of the game. There is also something tremendously satisfying about getting enough DNA together to successfully launch a new dinosaur into the park, however, that’s never guaranteed. Sometimes, even if you have enough DNA, it really isn’t enough and you end up with goo instead of an animal and that’s frustrating, which is probably pretty realistic, but for me, not fun to experience in a game. 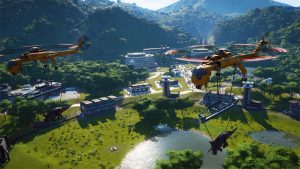 Who will love this game? Hardcore economic simulation fans and hardcore dinosaur fans. Who won’t love this game? Gamers who like something fast paced. I give 3.5/5 GiN Gems. Check it out for yourselves and let us know what you think in the comments below.