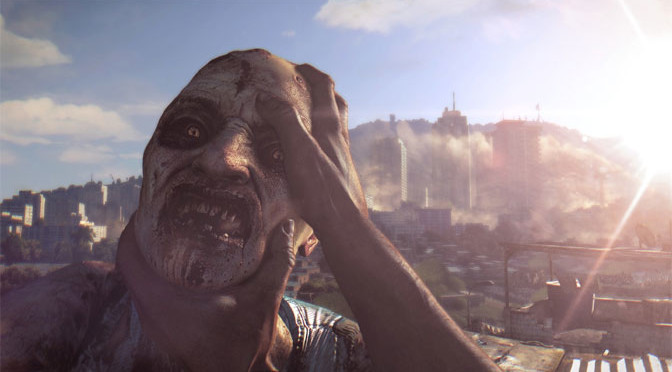 Way back when the first industry happening posted about Dying Light was posted I said I would review this game. I was hoping it wouldn’t be another rank and file zombie title still riding the dying wave of zombie fandom. We are nearing the end of the zombie spotlight in terms of horror, likely with werewolves making a comeback soon.

Back to our favorite flesh eaters, I was a curious what a non-Resident Evil or Dead Rising game could do with the pretty simple idea of a zombie. Dying Light followed the Dead Island school of thought with making it a first person fearfest. And in case you listened to last week’s GiN Lounge Podcast, you will know that yes, I consider Dying Light to be one of the must-play games of the year. It seems 2015 is off to a great start, and much of that is owed to Dying Light, which totally revolutionizes the zombie genre, or at least gives it a little more life.

This review will be looking at the main, single player game. Later on we will be spotlighting the “Be the Zombie” mode as well as some of the cooperative multiplayer aspects of Dying Light.

So looking at Dead Island for comparison, the big thing there was that it had a beautiful, almost oxymoronic paradox of a resort-quality tropical island paradise with blood soaked zombies running around. Dying light instead places you in the remnants of a destroyed city, complete with smoking buildings and gore-littered streets. The realism of the shredded world is nothing short of spine chilling. We may be talking about the beauty of rust on the wall type of thing, but it’s very atmospheric, even if that atmosphere is dark and depressing.

This fact sinks in from the very first cut scene where your character jumps from the back of a plane toward the dying city. When you make an abrupt landing you are attacked by some uninfected people. After your character shoots one of them, zombies begin to swarm you, but you are rescued by a few complete strangers. This kind of tells you that Dying Light is better played with friends. While a lone survivor can do a lot, there will be many situations where a single person should probably stick to the high ground and avoid a fight.

After some intro cutscenes and basic prologue you get to do the “test.” This part of the game introduces the free running parkour type elements, similar to that of Mirror’s Edge, another amazing game that featured it. In Dying Light, you will be using all surfaces to hop over and under, which is an effective way to get away from hoards of zombies. They may be fast (some of them) but they don’t have your parkour skills.

When doing the acrobatics, the atmosphere, especially when rendered by the next generation hardware like the Xbox One, looks amazing. While walking across the top of a crane for example, you can hear the wind and see the camera sway with the gusts. There may be no zombies high up there, but the environment is almost just as deadly. The feeling of dread and vertigo is palatable, and I found myself often being paranoid about falling off of high places. And I did a few times too.

The combat, a staple of any first person zombie adventure, is a great mix of fight and flight. Sometimes you see that lone zombie and you bash their brain in with a pipe wrench. Other times his brother, sister, mother, third cousin who was twice removed and weird uncle show up wanting a piece of you. You will have to once again engage your running skills to vault fences and ledges to escape being Thanksgiving dinner. When you do stand and fight, swinging weapons feels right and you can aim for various body parts easily enough. Firearms are also present in the game, though ammo is limited. They can even the odds in most fights, but there is never enough ammo, and they are very noisy, which means attracting more and more zombies as you use them. Best to keep then handy for emergency situations, of which there will be plenty.

Like other zombie games have done previously, you can take time to upgrade your weapons much like Dead Island by using everyday items to turn mundane cleavers into things like flame-throwing Taser swords (new patent idea right there). There are so many creative options for the crafting side of the game that you can spend quite a lot of time just tinkering around and seeing what you can come up with.

Another nice feature in the game is the fact that there is a realistic day and night cycle. You can be out on a mission and if it’s taking too long, the sun will start to set low in the horizon. Besides just a pretty sunset, this should also fill you dread because at night, much stronger zombies come out to hunt. While none are parkour masters like you, the nighttime zombies can climb up onto some ledges and give chase better than their daytime brethren. They also are stronger, doing more damage and taking a lot more damage before going down. A lone survivor wandering around at night has a much lower chance of surviving till dawn. If possible, players should consider finding a safe spot to hold up in the open-world until dawn, unless they really want a nice challenge. In that case, have at it night crawler. But don’t say you weren’t warned.

Interesting enough, nighttime is also dark. Not fake videogame dark where things are a little dim. It’s like pitch black in some cases, illuminated only by the light of your flashlight. This adds to the terror significantly. Not only can you walk right up on a zombie if you are not careful, but all those rooftop paths that provide safety during the day are much more difficult to navigate at night. The slogan of the game that has been used in advertising is “Good Night, Good Luck.” If you play Dying Light at night, you will see why.

I’m not going to shed story spoilers so I will wrap this review by talking about how effective the musical score is in setting the mood. Especially when it gets dark, the soundtrack really comes into play. So many times during my play through I turned around and yelled “Oh (insert expletive) a zombie!” The music sets a paranoia tone throughout the entire game that frays your nerves. Even when entering a safe zone, you feel like a zombie is going to jump out at you at any moment. So thanks to the composers for that.

Overall Dying Light should be considered an early nominee for game of the year as well as for best original music score. In fact, I think we are looking at the possible best zombie game ever created. Dying Light gets 5 GiN Gems from me because even though I’ve played so many horror games in the past, Dying Light ends up at the top of that pile.

Editors note: One more quick note, do watch out for Easter eggs that have been hidden throughout the game. The developers over at Techland must have a very good sense of humor. This can even help to break the otherwise stressful atmosphere with a good laugh whenever you come across them.