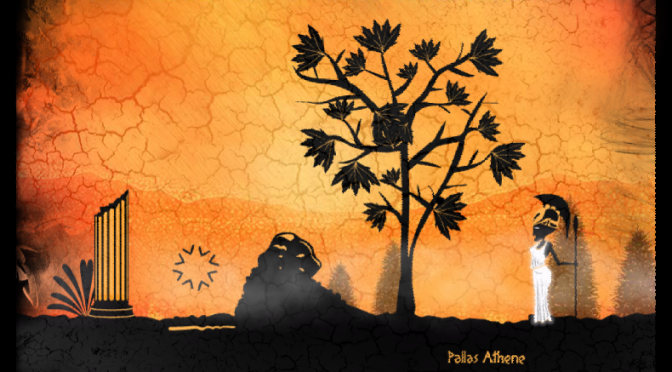 You’re not, as far as I could tell, any particular mythological hero, just a young champion who uses his wits to win the shield of Athene and the helmet and spear of Hephaestus, even though I’m pretty sure Haephestus makes helmets for the GODS and not for random human champions. Nevermind, Zeus probably slept with the hero’s mom, now it all makes sense.

Aphrodite gives you the most beautiful woman in the world, which works about as well it usually does in Greek myth, and you almost immediately have to do battle for her.

This is a littler browser game so a thousand ships are not required. Each scene is a simple point-and-click puzzlesolving adventure. It’s simplified enough that everything you need is on one screen (well, almost everything… keep your eyes open in the maze), and you can usually solve the puzzle with a little investigative clicking. If you do get lost in the labyrinth or killed by the hydra, you’ll get another chance to replay the scene.

Hades kidnaps the young hero’s girlfriend, because that’s what happens when you have the most beautiful woman in the world,  and the player must descend to the underworld to get her back. I was planning to make a joke about Hades kidnapping the young hero’s girlfriend in revenge for stealing the helmet Heaphestus was about to give to Hades, so when my hero got to the underworld, and Hades actually said, yeah, bring me my helmet and we’ll talk, I laughed out loud.  You’re not actually trading in the helmet for your girl though, Hades is sending you on mission to find his invisible helmet. I’m sure that won’t be too hard to find…

The art is, of course, what attracted me to this game. Each scene is the distinctive terracotta and black of Greek pottery, with columns and meanders to set the scene, and the occasional white accents. I thought it might be a good educational game for the kids, but a certain goddess of love seems to have a bit of an aversion to wearing clothes, so probably not a good fit.

The First Hero doesn’t take too long to complete, but every scene in this short browser adventure riffs on classical art and mythology.