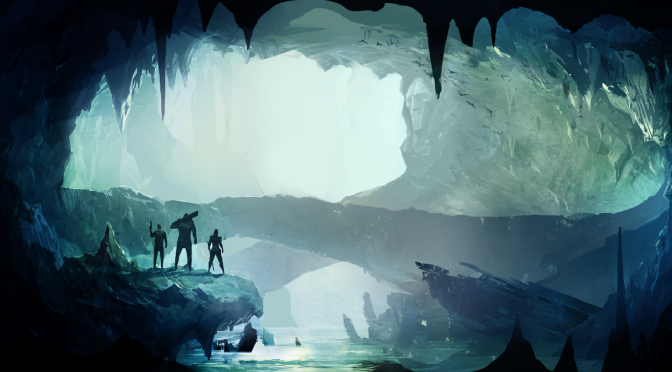 Dungeon of the Endless

Let it be said right off the bat: I’m not a huge fan of rogue-likes. It often feels as though the major design decision of randomized maps and levels often leads to ridiculously sharp contrasts in difficulty, leaving the player with the feeling that success or failure is dependent on sheer luck rather than their ability. However, Dungeon of the Endless is different. By mixing mechanics from other genres like real time strategy, RPGs and tower defense games, it creates a wonderfully cerebral and balanced experience.

In Dungeon of the Endless you guide two heroes through a subterranean cyberpunk dungeon after crash landing deep into the surface of a foreign planet. You need to explore the dungeon room-by-room, level-by-level, until you reach the top. The only surviving part of your escape pod is a large energy crystal which you must carry to the exit of each level to progress. But this game is a like a beautiful complex machine, with many of its components requiring explanation in order to understand it.

Opening doors and moving characters works like a point and click game (in fact everything can be controlled by the mouse), with each character taking up set positions in each room. When a new room is found, you need to power it up with “dust.” You start off with a small amount and gradually collect more via different methods such as defeating enemies and finding stockpiles. In your search for the exit of the level, it is paramount that you keep the power on, as enemies can spawn from darkened rooms to attack your power crystal, which will bring your dust level down, thus turning the lights out in each room one by one. Suddenly, your exploration route becomes a strategic choice in itself and the tension mounts as you never know what’s lurking in the dark chambers beyond.

[amazon asin=B00QIZO200&text=Buy Dungeon of the Endless from Amazon]

When battling, all heroes have their own unique stats and approaches. For example, if a hero uses swords they can move and attack quickly but will be susceptible to close range attacks, whereas heroes who carry guns will attack at a slower rate but can do so from a distance. Each hero also has their own quick fire abilities which can turn the tides of battle, but they can also gain boosts from the customization of equipment or leveling up.

However, heroes aren’t your only protection against the hordes of horrible monstrosities found in the dungeon. In particular rooms there are pads on the floor where “minor modules” can be placed for defense. Of course you can construct the fun stuff like lasers and tesla coils, but you can also build modules which boost your heroes’ abilities. And to make things that little bit deeper, you can also level them up.

But practically everything in the game hinges on the one aspect which makes Dungeon of the Endless work as a brilliant test of wits, the resource system. Resources are split into three types: industry, science and food. Almost every transaction in the game is affected by these, from the purchasing of items to the manual leveling up of characters. The main way you gather resources is by placing “major modules” in rooms which have specified platforms. Every time you open a door, more of a specific resource will be added to your total. Again, these can be leveled up but can also receive boosts from heroes who stay beside them.

All of these components of the game synchronize to a wonderfully cohesive system of play. The combination of the resource system and the randomized maps means you are constantly forced to make choices about how you play, always juggling the strategy of exploration, battling, hero stats, resource management and module defense all at once. And the tactical nature of the game erases any ludicrous difficulty spikes. If you find yourself being overwhelmed with enemies, it’s because of your own strategic downfalls. Yet the randomization of each campaign keeps a fresh sense of mystery.

And because of the synchronicity of these seemingly disparate gaming mechanics it sinks in surprisingly quickly, creating a brilliant sense of progression and achievement which doesn’t rely on sanity destroying difficulty. Most games can only be jealous of this great balancing act. Aside from the gloriously addicting gameplay, Dungeon of the Endless has those extra touches which turn great games into magical memories. The visual style is gorgeous, rendered in colorful high resolution pixel art, sitting somewhere in between the 8 and 16 bit eras. This is only enhanced by the soundtrack which fits the visuals, including some catchy but calm electronic soundscapes, complete with digital chimes and flutes. But there is also some great writing on hand in the form of dialogue between levels, written with a self-aware sense of humor reminiscent of the indie stealth-em-up Gunpoint.

If Dungeon of the Endless was only a single player affair, it’d be an experience worthy of a purchase. But with online play (for up to four players) bringing a different approach to the proceedings, you’ll easily can sink countless hours into it.

However, even though this game achieves an impressive level of brilliance, there are still a few issues. Firstly, if an online player is disconnected from the game, they cannot re-join it. And seeing as how games on Dungeon of the Endless can go on for hours, this is quite a big issue. Also, you can’t create private sessions at the time of writing, but Amplitude assures fans that it will cater for this in the future. When these changes are made, we will have a stonewall classic on our hands. But even now, it’s one of the best titles of the year, providing a wonderful experience for fans of both offline and online play.