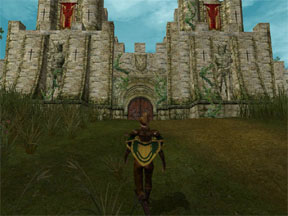 I hate to be the one to say this, but the emperor has no clothes!

D.W. Bradley is a master at his craft. He helped make Wizardry V, Wizardry VI and Wizardry VII. Even his last RPG game, Wizards & Warriors, was a good title for hardcore RPGers.

But come on. Bradley should be ashamed to release a title like Dungeon Lords under his name. I wonder if he even had anything at all to do with the game’s development or if he just sold the rights to his name to a group of junior developers and let them go. Either way, Bradley has either completely lost it, or better find a good lawyer to get the use of his name back. Nobody is going to want another D.W. Bradley game after playing Dungeon Lords.

The sad part is that the basic structure of the game works pretty well. But there are so many unfinished features that it drags the entire game to the ground. Even I stopped playing after a while, and I ALWAYS finish role-playing games, even completely average ones like Arx Fatalis.

Dungeon Lords is played in third person. I suppose that the developers over at Heuristic Park were trying to appeal to a more mass market audience instead of just hardcore RPGers. That is a bit odd for a supposed role-playing game, but I have to give kudos to them for trying something new.

But the wheels start to fall off right from the character generation phase. You can select different races and classes, but you can’t change the way your character looks. If you are going to be a female for example, you better like a blonde woman with a beehive-looking hairdo. The instruction manual has pictures showing you how to change the way your character looks, but these are grayed out in the actual game. This is just the first of many missing features you will find as you muddle through this should-not-have-been-released-yet title.

Once you are in the game, you will find yourself dropped into a wooded area where all the rocks and trees look pretty much the same. In fact, they look exactly like the world of Wizards & Warriors, and that title came out years ago.

Here you will run into another missing feature: the mini-map. The game comes with a foldout paper map that shows a pretty big world, but it is useless because you don’t know where you are in the game. You can set a key like "M" in the controls to bring up the map, but sadly, when you press that key in the game nothing happens.

How could they release a game without a mini-map? Have they ever played Morrowind? Or any other RPG released in the last four years? I realize this would have taken an extra week to program into the game, but come on. We are paying good money for this and you don’t even bother to put in a map?

Gameplay is repetitive. You fight a bunch of monsters hack and slash style and then like magic a bunch more spawn for you to fight. As you gain levels you can put them into different skills or increase your basic stats. The character development side of the game is actually the best part.

The graphics look good, if a bit dated, but levels and towns are obviously unfinished. After you leave the first town and start to head into the world, expect to find a lot of empty rooms with no furniture or other decorations. In the second town you come to if you are following the main plot, there was this huge building called the Hall of Weapons. Naturally I went inside. An elf greeted me and invited me to look around the museum at famous suits of elven armor and swords of legend, then said when I was done touring the museum to see him again and he would be willing to sell me some items.

The problem is that the entire building is as empty as a high school gymnasium without basketball hoops. There are some raised stone platforms that I suspect should have contained armor, but they were never added to the game. I guess all the top elven armor and weapons also have permanent invisibility spells cast on them. And the weapons the guy sold were just average fare I could have found almost anywhere.

The inn in the same town is the same way. The innkeeper makes you pay 300 gold for fine accommodations, but your room is as empty as a prison cell. So is every other room in the inn and in fact, in that entire town. The developers simply did not bother to add tables, chairs, beds or anything. Even the fireplaces were devoid of fire. The whole town is just a series of dark, empty rooms.

There were other problems. Quests would not leave my log even after I completed them sometimes. Other times I would complete a quest, like when you buy a special scroll to unlock one of your special powers, and the game would say nothing at all. Until I examined my character sheet carefully, I did not even know anything happened.

The AI is also as stupid as dirt. Guards in towns are supposed to help you in fights, but can’t figure out how to run around a low wall to or round a corner to join the fight. They will scream something like, "A guards work is never done!" but then won’t do anything. I started to think this was some kind of a practical joke, like they were really saying that they never actually do their jobs, not that they are constantly fighting.

Monsters are also pitifully stupid. Most can’t climb stairs. So if you are able to back onto a porch, they stand at the bottom as if you just put up a flaming wall. And they are all to happy to get peppered to death with your arrows or daggers and not do a thing to save themselves. In dungeons, the same thing happens with doorways much of the time. I had one giant creature just stand there and yell at me for five minutes while I calmly tossed daggers at it till it was dead. It did not know how to walk through an open doorway.

Eventually, I was given one nondescript quest too many. I was told to journey to the West to fight fire drakes, but never given an exact location or even a description of how to get there. So I kept going west, lost in the non-descript woods looking for these drakes and constantly being attacked by stupid random monsters. With no map and no landmarks, insult was added to injury when it got dark. Then I could hardly even see anything at all in the nondescript woods, but the random attacks kept coming.

It was then that I realized that the farther you go in this game, the less finished it seems. I suspect if you get to the very end you will be walking around in towns that are made of just line art.

But I will never know. Because I did something I have never done before in an RPG: I quit. Yes, the man who spent 800 hours playing Morrowind and all the expansion packs quit this one. But there is a big difference between Morrowind and Dungeon Lords. Morrowind is good.

It is worth noting that I downloaded the patch file before playing and it did not fix any of these errors. I wonder how bad it might have been out of the box without the patch?

Anyway, I must apologize to Mr. Bradley. You got me into the RPG genre and I hate to put one of your titles down. But you and I both know that Dungeon Lords does not even approach the greatness of your other games. I am not sure why the game is so unfinished. I saw a demo at E3 2004 and was told it was nearly done then. That’s more than enough time.

Dungeon Lords is not even close to the quality of almost any other RPG on the market. At E3 2005 I was in a press demo room showing the sequel to Morrowind, called Oblivion. I was in the room with 30 jaded-type press people from all types of magazines. At the end of the demo every single one of them had their mouths open and eyes wide. A few even clapped. If you want to see how to make a good RPG, see if you can get a demo of that. Heck, even semi-RPGs like Thief: Deadly Shadows are a lot more complex than this title.

I just don’t know what happened. I tried so hard to like this game, but you just made it impossible for me. I can’t really recommend it anyone, unless they find it in a $10 bin somewhere and have a lot of time to kill.