I’m not sure if Activision knew that releasing a free multiplayer shooter at a time when most of the world’s population was quarantining and stuck at home would make the game one of the most popular in recent memory, or if they just got lucky with the timing. But they did put out Call of Duty: Warzone at the right moment as the game recorded 50 million players in its first month.

Warzone is available for the PC, the PlayStation 4 and the Xbox One, so it really doesn’t matter how you like to play your games. You probably have access to Warzone’s free download. The game itself is based on Call of Duty Modern Warfare, and right now features a single main map and up to 150 players competing at the same time. 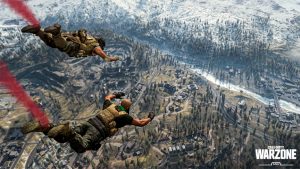 They layout of the game should be immediately familiar to anyone who has tried competitive battle royal type shooters like Fortnite or PBUG or watched people playing them in eSports tournaments. There is basically a huge map that players parachute into. Once there, they fight in teams against all others while sometimes completing side missions for bonus perks and gear. There is also a circle of poison gas that is slowly contracting the playfield, which forces players to move closer into the center of the map (though the actual location of the final clean air zone changes each time). In this way, teams are forced into increasingly close combat so that games don’t last forever.

Jumping into Warzones on the PlayStation 4 and PC was pretty much the same in terms of the number of available players and games. Games like this live and die on their player base, and at least for now, you can find a full game at almost any time during the day or night. And games fill up very quickly, so you wont have to wait very long to jump into the action. 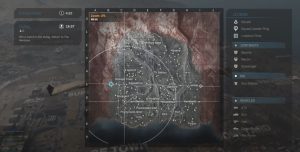 One of the cool features of Call of Duty Warzone is the fact that this is a Call of Duty game. That means that the realistic weapons and equipment are all present, as well as the great physics and weapon handling characteristics. The game has a more serious tone about it too, whereas others like Fortnite seem more comical in nature with people running around in bunny suits and things like that. There are customization options in Warzone, but they all tend to be much more realistic.

There are two main game modes, Battle Royal and plunder. Battle Royal is what you would expect from a game like this, where teams compete to be the last man standing at the end. Plunder is a little more relaxed and features players trying to scoop up as much cash as possible and get it to designated drop-off locations, or to deposit it using balloons found around the map. Since I’m not really a hardcore player anymore, I enjoyed Plunder a bit more, but both game modes are enjoyable, especially for free.

You can tell that Warzone is a quality game to the point where it’s hard to imagine that you are getting it for free. The graphics are really great and the map features lots of different terrain to keep things interesting. There are also a lot of heights involved so that you can climb up to get a height advantage in a lot of places. Vehicles round out the fun with everything from trucks to ATVs to combat helicopters. They are a little hard to control and use correctly, but in the hands of an expert can be almost overpowering. 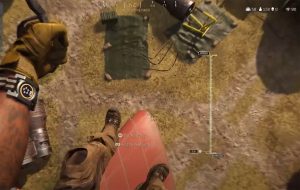 One of my favorite things about the game is the second chance battle. When you die you are taken to a gulag which acts as a sort of dead player prison. At first you are looking over a small locker room type arena from your cell where two other players are fighting. When its your turn, you are placed into that arena with another player. Each of you are given a weapon and you fight it out. The winner gets to respawn back into the game. 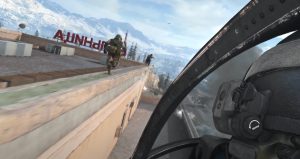 While you can enjoy Warzone by yourself, with the game grouping you randomly with other players to form a team, you probably won’t win a lot of matches that way. Since the game is free, there are tons of people playing with all different skill levels. Most likely you will get a lot of new players on your team, which will make it difficult to compete. The best way to experience Warzone is with a capable team. Either gather your friends or try to join a group that plays regularly.

There is a lot of strategy involved in Warzone, which is why team play is so important. More experienced groups will work together to complete side missions and spread out their money, loadouts and perks among members. The top teams learn to communicate using the ping system to paint the map and ensure that everyone is working towards the same goal.

If you were ever thinking about getting into eSports type competitions, or if you watched some streaming matches and thought that you could do that too, then this is your chance. Call of Duty Warzone is fun to play and totally free, though you will be subjected to advertising encouraging you to buy packs of weapons and customization items. But it’s still free. And Warzone is a solid game that you will likely enjoy whether you stick to casual play or try to join a regular team and become really competitive.

In any case, Warzone is a great way to spend some of your newly acquired free time. It’s easy to see why the game is so wildly popular right now.