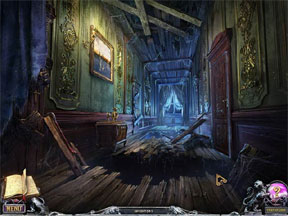 The Collector’s Edition of the House of 1,000 Doors: Family secrets is a hidden object type puzzle adventure that does absolutely everything right.

Personally, I love to take a break from all the shooters and RPGs and kick back with a good puzzle title. It works out a different part of your brain than most computer games, and if it’s not too insanely difficult, gives you a great feeling of accomplishment when you beat whatever it throws at you. House of 1,000 Doors does all that and more. I was actually quite surprised by how engaging the story was, and how at times I was actually just a little bit frightened by the spooky environments.

The plot starts out with Kate Reed as the main character. She’s a girl in the 1920’s, with an interest in the occult. So when she decides to accept a mysterious invitation to a seance, we get the idea that she’s done it before, as she comments that she hopes this group is not another bunch of fakes. It turns out that they are, but the spirits decide to use them nonetheless.

When Kate arrives at the hotel room, she finds the group of would-be spiritualists locked in suspended animation by real spooks, which gives her plenty of time to search the room and begin the first series of puzzles. This is sort of a warm-up, or tutorial, for what comes next, and is very well done.

Hidden objects are placed in locations that make sense, and not just hidden in the clutter for no good reason. They can also be used in smart ways, such as empting a jar of ink to re-soak the ribbon on a typewriter. There are even multi-stage puzzles which are quite nice, like collecting four different types of gems that act as keys for a special safe.

Inventory management is well-done too, and if you get totally frustrated and simply can’t find what you’re looking for, you can get a hint from the game which will highlight the area where the next object you need is located. While some gamers might use this as a crutch to quickly zip through levels, you will probably have a lot more fun if you don’t. After all, most of the objects you can find are in intelligent locations. But anyway, if you bought the game, then there is no reason why you should not be able to solve it however you like, so hint yourself away. The hint system also opens it up to younger players who might get frustrated more quickly.

The real story gets moving when spirits at the fake-turned-real seance contact Kate and tell her they need help. There is a magical house that appears only once per year, for one night. It pops up at a different location each time, but the spirits know where it’s going to be this time around and tell Kate. The mansion, with its 1,000 doors, is designed to allow the living to interact with, and help, the dead.

Basically there are secrets that trap the souls of the dead on this world. By unraveling them and solving the associated mystery, Kate can allow the trapped ghosts to go free. To tell you the truth, the setting for the game is a little bit scary. We are not talking Silent Hill or anything, but I let a novice gamer girl give it a try and she was a little freaked out by the whole thing. I’m guessing that while Kate does not seem to be in any real danger, it is kind of implied that she is in peril, or at least the setting would seem to suggest such a thing. That’s probably the reason for the Teen ESRB rating, though I would probably recommend the game for kids of all ages. Younger players may need a parent playing alongside them, though that would make for a pretty fun joint activity, so no harm done.

The mansion is dripping in atmosphere and the graphics are really well-constructed and colorful. They all seem to follow a sort of gloomy pattern of colors without being dull. The same can be said for the sound. The background noises and music is just about perfect, setting the tone and not getting in the way. In fact, everything fits in with the theme of the game and the environment to create a really enjoyable experience all around.

I’d say the puzzles range in difficulty from easy to about medium, with a few of the multi-piece or vitally important ones approaching, or just brushing up against, hard. Given that you can always fall back on the hint system, I wouldn’t worry too much about running into something you can’t handle. Every puzzle is sufficiently difficult so that you will get that feeling of accomplishment when you insert the final piece, always a good thing.

The collector’s edition we reviewed came on a CD-ROM from Viva Media. In addition to some extra puzzles, there is a nice screensaver and some mini-games, many of which are accessible via the extras menu after you complete the main game.

As a nice little bonus, the game has very low system requirements. While it runs fine on our testing supercomputer-like desktop PC running Windows 7, it’s just as much fun playing House of 1,000 doors on a modest laptop running Windows XP. And once installed, you no longer need the disk itself. You can just click the icon and start playing, making it truly portable for players on the go.

I would highly recommend House of 1,000 Doors: Family Secrets to anyone interested in breaking into the puzzle genre. The game will show you why these hidden object adventures are so popular. Of course those of you who already know this won’t want to miss this one either. House earns 4.5 GiN Gems as one of the best examples of its class of games, especially for those of you who like your puzzles with a little side of spooky.