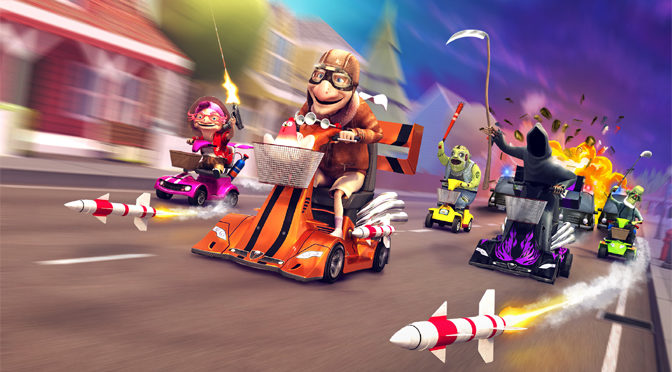 Hey all. I’m back with a game that took a page from my favorite Racing Game of all time. It’s Coffin Dodgers!

Plot Synopsis: Death’s come to town, and now he’s challenged the elderly residents to races in order to avoid dying.

Plot: Most racing games don’t have a plot, which is why I tend to stay away from them, and because they’re really not that fun after a while. The plot in this is, okay, but honestly I preferred Diddy Kong Racing’s plot over this, even if it was for children it was still more interesting.

Gameplay: The gameplay is also quite a bit like Diddy Kong Racing, but there are some elements from games like Road Rash, mainly the ability to use melee weapons to knock around your competition while racing. I’d be in absolute love with the game except there’s a huge problem and that is…

Art: Here’s where the game breaks down completely, I don’t mind the lower quality graphics that could be rendered on a second generation iPhone, despite this being on the PS4 which could handle much better graphics easily. I get that indie games don’t always look amazing, and that’s fine. I prefer stories over graphics any day.

However it has to be playable without causing me to throw up my lunch. From my own knowledge of making games, from the art to the actual design planning, I can recognize what the issue is. Coffin Dodgers during actual gameplay (read: Racing) is missing about 6-8 frames each second in a game that renders at the most 30fps or 30 frames per second.

So the game stutters and jerks around which is completely unacceptable. I was able to finish one race before having to run to the bathroom to deal with the nausea from playing the game. I didn’t play anything else after that, because that single issue really sums up the problem with the entire game. Which is lack of proper bug testing in the art and coding.

I have never encountered this problem in a finished game before. Sure maybe during a very early stage of a game in Alpha I might encounter such an issue, but honestly I don’t throw up unless I’ve got a really bad case of food poisoning, but this game proved to be an exception to that rule. I don’t get motion sickness or carsick, so I know it’s not me that is having the issue.

Music: It was decent, nothing memorable however so it gets a barely passing in my books.

Overall: Avoid this game, because even the most nausea proof person will have issues playing this game.

For those who like… Screw it, I can’t even come up with something nice to say here, just avoid this game like the diseased corpse it is.