A few weeks ago I reviewed the game Order of Battle: Pacific, a turn based real time strategy game that relives the Pacific campaigns during World War II. This time I am going to give my review for the expansion pack, US Marines. Playing Order of Battle: US Marines is the same with the Pacific game; the only difference is the initial title screen will have the option to select the US Marines’ campaign. The player still gets options to play all scenarios.

The campaign is focused on assaulting and capturing islands and coastlines held by the Japanese. As a player you get limited supplies but are able to purchase throughout the campaign a limited number of extra forces, armory, ships, and aircraft.   As with Order of Battle: Pacific each campaign takes place on Pacific Islands that hold to World War II events, but unlike with Order of Battle: Pacific where a player can play as either the US or Allies, or as Imperial Japan, when playing the US Marines you play as the Marines. I actually enjoyed playing as the Marines and trying to capture Islands, it also tested my skills at Real Time Strategy games or the lack of. 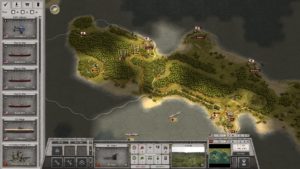 US Marines is hardcore and can take awhile to beat the campaigns. Defeating the enemy is not easy at first, mostly because of limited supplies and more than one island is involved. This is what makes this game good, more to accomplish, tests skills, and makes the player think with limitations. During the campaign the player is not limited to just Marines’ units. In the purchase tab regular infantry is available as well as an assortment of vehicles, tanks, anti-aircraft guns, fighters and bombers, supply ships and battleships, and reconnaissance units. Also being focused on islands and coastlines battleships become available during the mission and aircraft carriers for refueling aircraft.

Playing against the AI is tough in this expansion; personally I was defeated several times before developing a strategy for the campaign. Even then the developers of the game did not make it easy. Than again war is not suppose to be easy, and battles are won by might and tactic. It gives a form of realism to the game. The game is playable and instructions are clear. Mission briefings and objectives are very useful. Having the objectives appears at the end of each turn is helpful as well. As a turn base game once all units are moved or attack enemy units the player waits for the AI to move units. As Marines assaulting the islands and capturing them from the enemy the enemy has the upper hand, and the game does well to demonstrate this.

As for the other game elements, the music was still motivating and the graphics were well done. Units were also well modeled in the form of World War II soldiers, vehicles, and craft with infantry being distinct from the Marines. When capturing enemy bases the Marines plant a US Marines flag. Captured bases are also landing areas for newly deployed troops so troops do not always have to land from ships, which makes things a touch easier for the Marines.

Order of Battle: US Marines is a great addition to an already great game. Anyone who likes turn based real time strategy games will enjoy this expansion as well as the original Order of Battle: Pacific. It was fun to play as the Marines but also a good opportunity to develop my strategy skills and test my PC gaming abilities. The Artistocrats put out a very well developed game that I would continue to play.

One thought on “Fight As The US Marines In Order of Battle: US Marines DLC”