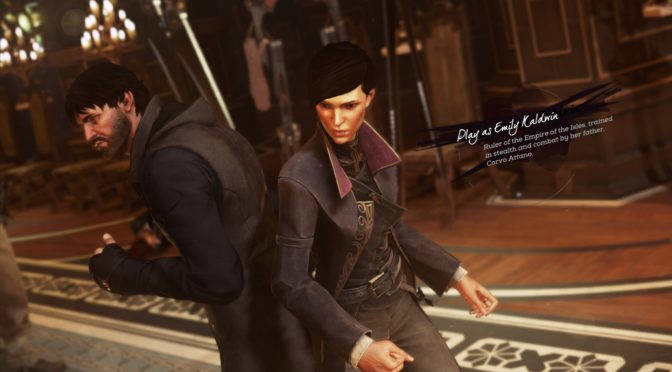 Dishonored 2 steps out of the gloom of Dunwall’s rat infested streets, the setting for the first game, and takes us to Karnacka, in the sun-drenched south. Taking place 15 years after the first game, Corvo’s daughter Emily is now a woman and reigning Empress of Dunwall, so we start on familiar ground.  All the apparent harmony comes to a swift end, when a pretender to the crown sweeps into court, declaring Corvo and Emily as enemies of the state who have assassinated their enemies to retain power.

Thus the game begins and as a player, you must choose to play as Corvo or Emily, barely five minutes into the story. You’re stuck with whichever character you choose for the rest of the game, which offers some incentive to replay the game from a different perspective. I would have preferred to flip between player characters. That said, the way the story is told does change slightly, depending on whether you choose Emily or Corvo.

Dishonored 2 delivers a beautiful steampunk dystopia, rich with details and intricate level design. The open level design of the original Dishonored remains, allowing you to approach each mission in different ways. Choose your style from full on stealth, to knife to the throat assassin, all out slaughter or a mixture.

Rats were one of the major hurdles in Dishonored, but the sequel uses Bloodflies. These aggressive mosquito-type insects inhabit abandoned buildings and attack if disturbed. The nests can be destroyed with fire, but the swarms do inflict significant damage. In addition, the more bodies you leave around the cities, the more Blood Flies will breed. This is just one of the ways the game encourages player stealth over the murder death kill option. If you complete the game with limited kills, you unlock a more optimistic ending.

The main enemy are the guards, who patrol the streets or may just play cards in a room, while complaining of being hungry or bored and waiting for their shift to end.  If you’re too noisy, they will come and investigate and call back-up, so these are no clowns. And combat often ends badly, as a few choice swipes of their sword, sees your character fall.

At this point, the detailed level design comes into play. The world of Dishonored 2 is beautiful and feels more alive than the original game. There are more townspeople going about their daily lives. They will talk to you, but don’t hang around too long, otherwise their suspicion turns to fear and they call the guards.

In addition to the people and the peeling posters for dances and adverts for the latest style of shoe, there are bottles and glasses, which can be thrown to distract guards. Inside houses, taps can be turned on, lights can be switched or you can tap at one of the many typewriters (regimes always like bureaucracy). Guards notice if something in a room changes, such as the lights go out, a door opens or the toilet flushes, so use these to your advantage to draw guards out.

When it comes to finding your style of play, Dishonored 2 gives you lots of avenues to explore. Corvo has a freeze time power, which can be used to set intricate traps, before starting time again and watching your plan fall into place. Meanwhile, Emily has a linking power. This allows you to link guards, so that if you kill one, they all go down. Combine this with other powers, such as Emily’s decoy doppelganger to run rings around the guards, while you pickpocket their keys and slip into the shadows.

One of the highlights of the game, comes at the midpoint, when you reach the Clockwork Mansion. This enchanting level is a clockwork house, which can be rearranged for a Monument Valley style switching of rooms and hallways. All the while, your enemy and master inventor, Jindosh Rubick taunts you over a loudspeaker system, as you try to infiltrate his home.

Rubick also unleashes his clockwork soldiers – towering robots with sharp, spindly limbs. One slash of their sword arms and you go down. That said, a couple of well-placed explosions dispenses these foes quite quickly, so they’re a bit disappointing as an enemy.  The other major foe, introduced later in the game, are the witches. They’re deployed by the villain of the piece, Delilah, who wields some kind of magic.

There is so much to enjoy about Dishonored 2, which does build on the world of the original. I prefer the brighter setting, which gives way to beautiful sun bleached city walls and coastal towns. In addition, the clockwork elements sit so well, with trams and wind turbines powering the cities. The world feels lived in and alive, which makes it a joy to inhabit, but there’s something missing.

The story isn’t as fulfilling as the original Dishonored. It’s essentially a Sleeping Beauty style tale – wicked fairy comes to spoil the party with evil magic and the hero must undo the spell. Emily isn’t the most engaging character and a lot of the story is told through lengthy bits of text, such as diaries, books and newspapers, which can get a bit tiresome. Other story elements are told using voiceover from the player character between levels.

The most engaging character is Captain Meagan Foster voiced by Rosario Dawson. She’s a grizzled, one-armed captain of a ship, which serves as the game’s central hub. Even she’s not given as much of a story as I’d like. The other notable character is the Outsider, played by the brilliant Robin Lord Taylor (Penguin in Gotham), in  a perfect bit of casting. Despite great voice actors, I found myself drifting off during dialogue scenes because nothing anyone says is very interesting.

When it comes to visual storytelling, Dishonored 2 is fantastic, but it struggles with actual dialogue, which is a strange disparity that tarnishes my experience.  This isn’t helped by the lack of lavish set pieces. Apart from a couple of notable exceptions, Dishonored 2 lacks the imagination of a game like Hitman. There are no balls to infiltrate, no options to rally political allies or steal a clockwork getaway vehicle – just more empty buildings with guards to avoid.

That said, Dishonored 2 is a lot of fun and unusually, it’s a game that benefits from more than one play-through. Having played as both characters, the intricate levels come into their own when you know the layout. Exploring power combinations and different paths through levels is the real joy of Dishonored 2. But if you’re looking for an engaging story, then you’ll be disappointed, which is a shame because I think this world has an interesting story to tell