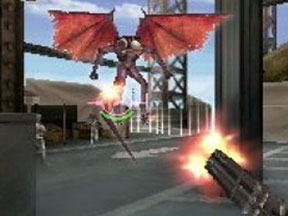 Most games on a cell phone are fairly simple, but this one takes the very small screen to places that it has never been.

Dirge of Cerberus – Lost Episode takes place three years after meteorfall (when FFVII ended). The world is threatened by the Deepground soldiers, a mysterious army of bloodthirsty warriors. As the story opens Vincent Valentine learns that the soldiers are searching for him to get their hands on the Protomateria. He decides to investigate Shinra Manor in an effort to uncover his own personal truth—and the mystery behind the Protomateria. Vincent leaves for Nibelheim in a WRO chopper and heads for the horizon. With the Deepground following in hot pursuit, it is not long before they attack the chopper, and that is where the action begins.

You explore the world in Battle Mode from a third person perspective. Navigation is done using the d-pad. You move around by pushing up to move forwards and down to move backwards; left and right respectively to move in those directions. You can select your three weapons by entering 1, 2, or 3 for Cerberus, machine gun (griffin) and rifle (hydra). The right soft key takes you into the options menu, and hitting the "ok" button takes you into First Person Shooter (FPS) Battle Mode.

Sometimes you will see enemies coming at you. If you don’t, the game will let you know that there is something to shoot at by displaying a target ring which is a white circle with one or more segments turned yellow so show you where the thing to shoot is located. While in FPS Battle mode the controls change slightly. You can look around using the left and right d-pad buttons. Additionally double tapping the left and right buttons causes you to roll in that direction. The up and down arrows cause you to revert back to battle mode. The "ok" button causes you to shoot your selected weapon. Weapon select is the same as is pressing the right soft key to enter the options menu. It really uses the controls found on most phones perfectly.

Game play is easy and the game does a nice job of teaching you the controls. I found the 3rd person perspective tough at times, but switching to FPS to look around and change your directions is easy and works really well. Depending on where you are playing (like in a corporate meeting room) you may need to turn the sound off, but that only affects the music and shooting sounds. All dialogue is done through text so that turning the sound off has no impact on that. As you explore you will encounter beast change points which allow Vincent to change into the Galian Beast for a short period of time. In this form he is very powerful and is able to deal more damage, but the auto correcting weapon does not come into play. Also sometimes you will need to use standing weapons and they are harder to use as the auto aiming does not work on them either.

The best part of Dirge of Cerberus – Lost Episode is the really good graphics. I played several other FPS games on mobile phones at E3 this past year, and this is one of the best looking FPS games I have seen to date. The other nice feature is that the game automatically saves your spot at the end of each stage of the game; this is nice if you are traveling–as whatever happens, you will not have to go back and restart very far from where you died or had to stop playing for some other reason.

Normally with FPS game the thing to talk about now is multiplayer, but this is a cell phone game so I was not expecting to talk about it here, but Online Battle Mode (Multi-player) may be released for the game at a later date. Square has not made a final decision on this yet.

Currently Dirge of Cerberus – Lost Episode is available on the Amp’d mobile (www.ampd.com) network and will be set for Verizon Vcast sometime this winter.

Overall I was very impressed with Dirge of Cerberus – Lost Episode – Final Fantasy VII. I found the whole experience of playing on a cell phone to be both enjoyable and entertaining. The graphics were very good, and it was very easy to control the game.