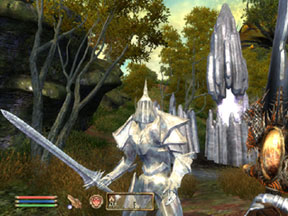 My Day In The Shivering Isles

Yesterday I had the rare opportunity to tour Bethesda Softworks studios and take a look at two Oblivion-related titles that the company plans to release in March.

The first game I played was Oblivion for the PS3. Considering that Oblivion was supposed to be a launch title for the platform, PlayStation-only gamers are probably thinking that it’s about time. As far as I could tell, the PS3 version seems to be an exact copy from the PC and 360 one. Even the little flaws like when you are swimming and you go just below the surface to dissolve the fog of war so you can see forever without any murkiness, exists in the PS3 version that I played. The one main difference is that PS3 gamers will get the Knights of the Nine mini-expansion pack as part of the game.

Given how popular Oblivion has been elsewhere, there is no reason to think that PS3 players will be anything but pleased once the title comes out for them. As interesting as the new PS3 Oblivion version was, I was most interested in jumping into the Shivering Isles expansion which will be released for the PC and 360 about a week after the core game hits the PS3. I spent most of the day playing here.

Unlike Knights of the Nine, Shivering Isles is a true expansion pack in much the way Bloodmoon was for Morrowind. We are talking about a brand new world to explore that is about a third as big as the landmass for the core game.

As with most grand quests in Oblivion, your journey starts with a riddle. A giant carved stone head has appeared in the lands near Bravil, glowing with power and obviously a portal to another realm. As you arrive, a motley looking fellow steps out and a nearby Imperial guard says "Oh no, this one is violent." The obviously crazy portal person and the guard fight, with the guard easily winning. When you talk to the guard he explains that this portal recently opened and everyone who steps into it comes back "changed." Basically everyone who goes in sane returns like a raving mad lunatic. But free will being what it is, he won’t stop you if you want to head inside.

Assuming you do (and come on, a mystery like that is irresistible for anyone worthy of the title adventurer) then you end up in a small office having a civil conversation with a man who is the chancellor for Lord Sheogorath, the prince of madness. He explains that to truly enter the realm of madness you must pass a test, and that those who fail are blessed with madness. If you agree, he disappears and the room dissolves in a swarm of beautiful butterflies. Nice effect!

You are left standing in a town that looks like Seyda Neen from Morrowind. Considering every part of Oblivion we have seen so far has been all fire, lava and brimstone, the cool waters and chaotic vegetation make the town of Passwall seem like a paradise. In fact, there are several people living in the town that say the same thing. All of them however seem to be just a little bit odd, which is slightly creepy even though there are no overt threats. It’s kind of like walking around the Twilight Zone and finding a place where something is wrong, but you just can’t quite put your finger on it.

Eventually you will learn that to leave Passwall and venture deeper into the realm of madness that you have to defeat a gatekeeper. And what a gatekeeper it is. He is a giant with a sword for an arm that looks like he would be more at home in Silent Hill than Oblivion. When you first see him, he is killing a group of heavily-armed adventures with ease. It’s pretty obvious that attacking him head-on won’t yield results.

This is your first real challenge in the new realm, and there are several ways to go about it. You can try the slick tongue approach (with other characters, not the gatekeeper) and a stealthy mission, or you can find a more brute force way to shake things loose. I was told that you could complete the first challenge in about 20 minutes, though I liked taking my time and exploring the strange realms around me, so it took me much, much longer, not that I was not having a great time.

Once you get the keys, you can either enter Mania, which is a nice world where everything is bright and sunny, but no less deadly than you would expect from a plain of Oblivion, or Dementia which is a dark land of evil and shadow. I know you are thinking, "pick the sunny world" but really, it’s as deadly as the other and for my tastes a bit more unsettling since it does not SEEM very dangerous on the surface. The two worlds represent both halves of the demented mind of Sheogorath, whom you will meet in your travels.

The world is beautiful no matter which side you are on. A lot of it looks like Morrowind’s organic swamps and forests. Some of the more famous Morrowind monsters like the Hunger Beasts make a reappearance, adding to the feeling of dÃƒÂ©jÃƒÂ vu for those of us that explored there. There are also quite a few new monsters like a dog that has been partially skinned, yet still attacks like it was all there and some very scary spider creatures that trump the spider daedra in terms of generating a fear factor for me. Those new spiders seem to creep perfectly through the underbrush until they are ready to leap out and attack.

Creatures are also tuned to their environment quite a bit. Some will regenerate if they are standing in water, or if it’s raining. If it’s raining and they are standing in water at the same time, you can expect the challenge level to be significantly higher than you are probably expecting. This leads to some interesting tactics that the smart adventurer, upon learning of the creature’s strengths and weaknesses, will want to employ.

There is one major settlement, New Sheoth, and quite a few little minor ones in the new lands. And they are populated with people who have troubles that you can solve if you like. The main quest should take you between 20 and 40 hours to complete, though if you are like me you can multiply that by quite a bit when you add in all the side missions and exploring every nook and cranny above and below the surface of the lands as well as the waters.

There are plenty of dungeons and secret places in the realm. I stumbled onto a few of them. Dungeons seem more carefully laid out than some of the standard ones in Oblivion, with a lot of buttons to push and traps to avoid. You can tell that a lot of time went into making these dungeons both a challenge for your head as well as your sword arm.

The main quest involves helping to save this disjointed realm from something that wants to destroy it. Sure your new employer is as crazy as a mad hatter, which will become obvious after about a minute talking with him, but he pays well and really, have any of us ever had a boss that wasn’t crazy? Sheogorath is nothing if not entertaining and even though most people would consider him evil, I really kind of liked him. As daedra go, he’s pretty cool.

I can’t see any reason not to recommend Shivering Isles to everyone who enjoyed or is in the process of enjoying the core Oblivion game. It adds a bit of an X-files element to the game and inserts what I feel is a needed gray area into the mostly black and white world of good versus evil of this fine fantasy realm.

According to Bethesda, the core Oblivion game for the PS3 (plus the included Knights of the Nine expansion) will come out first, probably in a couple weeks and definitely sometime in March. Then the Shivering Isles expansion pack for the Xbox 360 and the PC will come out a week later. The PC version will be in stores and the Xbox 360 version can be downloaded. Eventually Shivering Isles should also come out for the PS3, though no timetable for its release has been set.

Of course I also asked about Fallout, but the folks at Bethesda are not talking about it just yet. I did get them to say that some of the Oblivion team have been transferred into Fallout teams, so it looks like there is going to be a lot of top talent working on that new title. If Fallout ends up being half as good as Oblivion then they will have a huge hit on their hands. And can you even imagine what would happen if the game were actually better? Talk about risking your sanity!