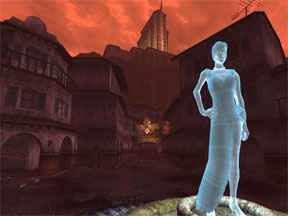 Where is the Dead Money review?

Over the past few weeks that has been all that I heard from everyone, wondering when the Dead Money review would be finished. This was a hard game for me to review because just like in Fallout 3, before the excellent Broken Steel DLC came and reworked the ending, I have suffered the same fate with New Vegas in not having a perfect save file. Why can’t they just continue the game after the ending and let us play DLCs from there like everyone else instead of forcing us to go back in time to play?

My highest level save (a level 25 character) was at the red herring known as the Hoover Dam, and I ended up having to go back to a save which had me at Level 19. And considering that the developers recommend Dead Money to be played with at least a Level 20 character, it was very difficult for me to enjoy.

Dead Money starts off in the same way that most previous Fallout 3 DLCs have done in the past. A mysterious radio message can be picked up, leading to an off-the-map location. In this case, it leads first to an abandoned bunker (near Camp Forlorn Hope) that entices you towards the Sierra Madre Casino and its lost treasure.

However when you get there you are knocked out and when you wake up, you meet a holographic image of Father Elijah, that Brotherhood Scribe that your companion Veronica told you about if you had her along with you, who tells you that you have been fitted with an explosive collar that will detonate if you don’t assist him.

Even worse, the collar can be triggered by going too close to radios or speakers, and even with an audible warning letting you know where you should and should not go, dealing with the collar alone is an exercise in frustration.

The first part of the quest involves searching for three allies to help you in your mission. One of the missions alone is a pain, trying to earn the assistance of an imprisoned Super Mutant named Dog. The quest requires you to get a radio signal to unlock Dog’s cell, but even when getting the signal to him, I had trouble getting him out without the collar going boom. And if I hear one more time that message of "Dog is sorry, sorry, sorry," I’ll put an explosive collar around my own neck and stand next to my XM receiver!

Anyway, this is probably the first time you will experience a room full of radios in Dead Money. The trick is to shoot whatever radio you can see and then move forward. The trouble is that the buildings are setup so that you can’t always see or even get to a radio. You have to exit the structure and come in from a different way sometimes, or simply run through the "invisible death field" hoping that you can pass through it before your collar blows up. Speakers are even worse than radios, because some of them can’t be shot because they are shielded. Those have to be switched off somehow, by finding a computer or a power switch somewhere nearby, or perhaps on another floor somewhere.

Dog is pretty cool once you find him, and he can be switched at will to a different companion named God as the supermutant’s multiple personalities battle it out. God is very smart and will improve your stealth and make you immune to many of the traps all around, while Dog will eat Ghost People for you – zombie-like denizens of this strange world that are very hard to permanently kill.

Another ally to find is a ghoul named Dean Domino. You might have seen his poster in the load screens or out in the wasteland as he was a famous singer in his day. While getting to him was a little easier, I still had a problem to deal with in the form of toxic red fog everywhere I went, as well as traps around every corner. Of course once you get Dean in your party, he can negate the effects of the red cloud for you. Are you starting to see a trend here? Each of your companions can negate one of the traps you find in the world. In this way, the game almost becomes like a strategic shooter like Mass Effect 2 or something, where the right companion can mean the difference between an average challenge and a nearly-impossible task.

Combat is very hard here. The Sierra Madre Casino and its vicinity are swarmed with undead that seem to only be rendered "unconscious" when their health runs out, only to come up and attack again. Here is where Dog is a big help, because he can put them down once and for all by eating them up. Otherwise, you can put a single bullet into their heads once they are down, and that generally shuts them up forever.

The final companion is Christine, who may have been the lover of Veronica if you get deep into her backstory. Christine is a great character who is also a mute since you free her from a crazy autodoc that ripped out her voice box. This is part of the overall plot of the DLC, but I’ll let you figure that out. Anyway, Christine communicates by gestures and you need a high PER or INT to understand her. Her power is that she can block radio signals from getting to your collar for a time, which is invaluable if you don’t want your head exploding. There are also some romantic elements to her character, though not a full blown romance as far as I can tell. Still, it’s more than anyone else in the wasteland as this angle has yet again been left out.

Now, a lot of people will probably be frustrated with Dead Money because if you don’t think, you won’t survive here. It’s one of the harder DLCs out there. If you just like to run and gun, Dead Money isn’t for you. A lot of buildings require you to sneak in their back doors, monkey with the computer, go around to the front or a different floor, destroy a speaker blocking your path, go back around back, head into the basement to monkey with the power, change the settings on a different computer and then complete one or a series of objectives. These tasks generally need to be done in an order that you have to figure out as you go. Oh, and it helps if you have the right companion with you. I can see a lot of people getting frustrated with Dead Money even though I really liked it. It’s more difficult than New Vegas, that’s for sure.

You can have a lot of fun with this DLC, but only if you have a high tolerance for pain, and a big, big brain.

Pros: Decently priced at 800 MSP ($10) for about 5 hours of gameplay. Level cap increased by 5. Adds strategic thinking to the wasteland.

Cons: Frustrating at parts, especially with the explosive collar. Level 20 recommended before playing.