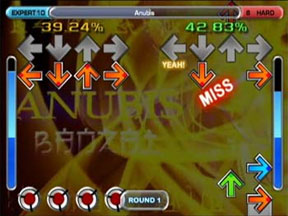 Konami’s success with the Dance Dance Revolution series was bound to come up with several other copycats wanting to take a share of the crown. A few years ago, Korean game developer Andamiro came up with their own series called Pump It Up. While not as well known as the DDR series, it still has its share of fans. A PlayStation 2 version of their latest game: Pump It Up Exceed will be released by Mad Catz later this year.

One of the series’ biggest supporters is a company called Red Octane. Originally known as a hardware developer, their biggest claim to fame is the critically acclaimed Ignition Dance Pads. They are now looking towards making their own games, and their first game released is called In The Groove.

Developed by Roxor Games, In The Groove was developed with the hardcore DDR fan in mind, by DDR professionals. In essence, the gameplay mechanics are exactly identical to that in Konami’s series, but also comes up with its own unique modifiers.

Sure, the game follows the usual "step on the highlighted arrow" formula, but when you are unaware of when the arrow will show up, or where it will go, that makes the game even more difficult. There are even steps that will require at least three arrows to be pressed down, thus requiring both the use of your feet AND hands. In addition, now arrows can be replaced with mines. Stepping on a mine step will actually hurt your overall score rather than build on it.

There are tons of mods and options available for even the most skilled DDR/ITG player to enjoy for a long period of time. In addition, with at least 70 original songs to choose from, the replay value is massive.

Visually the game is familiar to DDR fans, but the arrows are now done in a 3D state. Depending on the mod used, the arrows can move up as normal, or they can fly towards the screen or away from the bottom (similar to the opening text in all the Star Wars movies.) Background videos are simplistic, but familiar to DDR fans.

Scoring is no longer shown as a point value, but rather a percentage of how many notes were rated as "Fantastic" (equal to the Marvelous rating in DDR Extreme), and there is now a progress bar in the top of the screen, displaying how far the player is in the current song.

As with any other dance game, the music is always impressive. There is always one of two songs that doesn’t seem to fit with the rest (any song by N.M.R. is a perfect example), but I haven’t really noticed any bad songs here. Even DDR legends like E-Rotic provided new music for the game.

There aren’t many complaints about ITG, but if I could find one, it would have to be with the loading times. Konami does an amazing job with the game’s load times; they are similar to the times in the arcade. That is not the case with ITG, as some songs can take up to ten seconds to load.

Secondly, while not being a fault with the game itself, Roxor is one subject of a lawsuit brought on by Konami, who feel that In the Groove is a direct violation of their DDR trademark. More information can be located at www.ddrfreak.com, a fan page specializing in DDR, ITG, and many other Bemani titles.

Despite being heavily identical to DDR, In the Groove is as enjoyable as any other DDR title, and will bring any seasoned DDR fan to his knees with some of the most challenging moves ever.

This is the first game that Red Octane is releasing. Their next title is a guitar sim entitled Guitar Heroes, produced in conjunction with Harmonix (of Karaoke Revolution fame). Whether or not that gets in trouble with Konami (who has Guitar Freaks in Japan), has yet to be seen.

In The Groove earns 4 GiN Gems for being a very fun title with unlimited replay value.