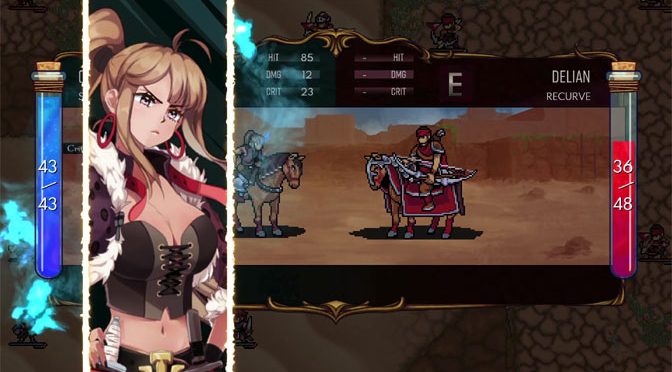 Dark Deity, which released last year on Steam and more recently on Switch, is a game that’s very reminiscent of a Fire Emblem that no longer exists. I personally loved Three Houses, but there was just something special about those older games: a strategy RPG where you couldn’t take time to grind and had to make do with what you were given. Dark Deity makes sure to wear its Fire Emblem inspiration like a badge of honor, and everything from the combat animations to the character portraits exude a very similar flair. So is Dark Deity an imposter, or is it a worthwhile contribution to your games collection? Let’s find out. 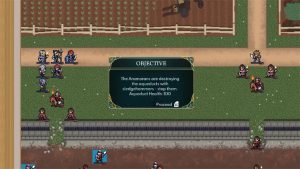 Dark Deity portrays the story of a group of military academy students who are drafted into the military due to an imminent invasion. The story seems a bit disjointed at first and becomes more interesting around halfway through the game, but the jovial cast of characters really carries the game through the somewhat rocky start. In each chapter of the game, players will be treated with some dialogue, the ability to speak with your comrades to develop bonds between the characters (like the support conversations from Fire Emblem), shop for items, and more.

Like older Fire Emblem titles, you select your units and have them attack enemies on a map to clear a condition that needs met in order to win. On your player phase, moving units is simple, and battles play out in a beautifully animated scene with lots of pizzazz. Almost all pressing information, such as the amount of damage that will be dealt, chance to hit, and the like, are shown to you in a pre-battle screen. This arms the player with a considerable amount of information on which you can base your important decisions of how far to overextend, if at all. Like in Fire Emblem, moving all of your units ends your turn, then the enemy phase begins where they can move and attack you. You get a phase to attack, your enemy gets a phase to attack, it’s only fair. 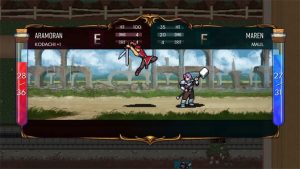 For players upset that later Fire Emblems have seemingly dropped the weapons triangle, you’ll be pleased to know that a system similar to that is present in Dark Deity, but it’s based on the weapon against the target’s armor. A crushing weapon like a hammer is strong against heavy plate, but not against light armor, while projectiles like arrows are strong against light armor but not against plate. This take on Fire Emblem’s weapon triangle is a lot more involved, because each unit class will have access to one weapon and armor type. Thankfully, should you make a mistake and get one of your units killed, you don’t have to worry about old Fire Emblem’s traditional perma-death, though they do lose some of their stats permanently and have to sit out a battle, instead.

Similar to games like the first few Shining Force titles or Fire Emblem Sacred Stones, units that reach level 10 will be able to promote to one of four different intermediate classes, and leveling more will let you promote again into one of four advanced classes. You can’t switch classes once you’ve chosen, so be mindful of this should you frequently suffer decision paralysis! Thankfully, when the promotion screen appears, you can even see what your aptitudes, or growth rates, are with each stat in your new class, as well as what new skills you might learn (a much-appreciated bit of transparency). 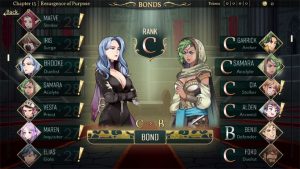 To add on top of the healthy character customization, each unit class also gains access of up to 6 skills, as well as four weapons that can have their damage, accuracy, critical hit chance, and weight upgraded. There’s quite a healthy amount of customization, though resources like gold are notably finite, and Dark Deity doesn’t feature additional stages on which you can grind. Like the older Fire Emblems, you get swaths of recruitable characters thrown at you almost every chapter, and once you complete the objective, you move onto the next chapter. This means that care needs to be taken in leveling up your units- letting one guy hog all of the EXP because he can easily handle the foes may mean that your other characters are too weak to meaningfully participate in later chapters. You also likely won’t have enough tokens to upgrade all of your characters, so you are likely best served by picking a few reliable favorites to spend your resources on. 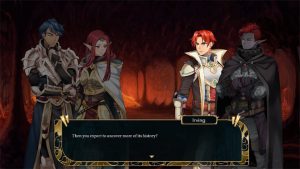 Though Dark Deity will default to using randomized level ups based on a unit’s aptitude, you can also turn that off and play with linear stat progression instead. This gives you the average for every level up and completely eliminates what we call in the industry, “RNG Screw,” where a character with a normally high growth rate for a stat may severely underperform for some players. Fixed level ups was a system tried in Fire Emblem: Path of Radiance and, as far as I recall, never tried in the series again outside of Shadow Dragon’s dynamic growth system, so it’s nice to see something like that present in Dark Deity. 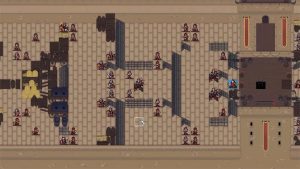 Of course, there are some Switch-specific caveats that warrant mention. Load times for Dark Deity on Switch can be quite obtrusive, taking quite a while to load the battle map, for example. There’s also quite a number of bugs from the Switch launch that still, as of this writing, have no yet been patched. There might be a few times where you go to select a character and the game actually thinks you’re selecting the field tile underneath them. Additionally, some class skills seem to be bugged, and a couple of times a unit seemed to occupy two spaces at once. These bugs didn’t seem to be present on the PC version of the game, or at least not when I last played it. 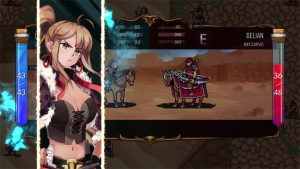 If there’s any one thing Dark Deity needs, it’s more elaborate tutorials for people who have never played Fire Emblem before. For those of us who have been playing the series for years, having several points of speed on your opponent and getting a second attack (usually called Doubling in the community) is second nature, and we typically know that the speed stat used is reduced by the weight of the weapon with which you’re attacking. The problem is that I don’t think this is explained anywhere in the game at all (or I may have missed it, I suppose), though you can check the character’s status screen to see a true speed stat that will help you determine if you’re going to double, or be doubled, once you know what it is. So Dark Deity is very forthcoming with its information, it’s just easy to see how numbers without explanation could confuse non-veteran players. 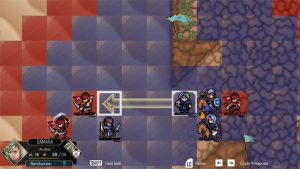 The spritework for Dark Deity is quite good- it gives just enough of that oldschool feel that it can make you reminisce about the games from which this drew its inspiration. Of particular note are the character portraits, which are all beautifully drawn and really do a great job conveying the personality of the characters they represent. The music punches significantly above its weight class, too, preferring for a more full-bodied soundtrack rather than a classic style chiptune. There are instruments used in the compositions that emulate stringed instruments very well, and a lot of work was clearly done to help convey the emotions of each scene in the game. 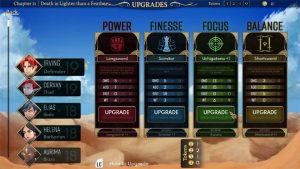 All in all, Dark Deity on Switch is a great game for those who want to experience the old days of Fire Emblem, and this game proudly wears its inspiration as a badge of honor. What’s so impressive about the game is that it does everything reasonably well, from the visuals and music choices to the balancing of weapon and armor advantages or disadvantages. There are some strange bugs in the Switch version of the game, in particular, that could impact enjoyment of the game pretty easily, but Dark Deity could be worth your time and interest should it go on sale or receive a patch to improve some of its issues.