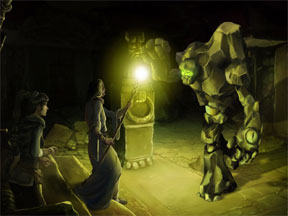 I tend to have problems with a lot of point and click adventures. After a while they all start to blend together for me. For me, about eighty percent are cookie cutter stories with identical puzzles.

However, one company has been a constant exception for me and that is Daedalic. Each game they’ve made has had unique background art and a style all their own. In addition the stories are top notch and aren’t afraid to institute sarcastic humor into each title.

I got the opportunity to dig into Daedalic’s latest epic title, Memoria, and I was so glad to be picked for this assignment.

The plot this time follows the story of Geron, a young bird catcher. Geron’s girlfriend was turned into a raven, and a traveling merchant says he can change her back for a small favor. Geron must discover the fate of a lost princess named Sadja.

After the opening when you take control of Geron for the first time, I was pleased to see Daedalic stuck with the background style where the grand vistas look like paintings. The tutorial takes you to the traveling merchant where you learn about Sadja.

At this point I was intrigued by the story. The delivery was great and the voice acting flawless as well.

Then the story went back in time to see things from Sadja’s point of view. During the first part of the flashback we see the opening credits, a nice way to include them without getting in the way. The music playing in the background was nothing short of stellar. The little cut scene was also intriguing as well, especially the giant spider that would have terrified our resident arachnophobia-prone reviewer, Vincent Mahoney.

Overall, Memoria is a little bit on the dark side as adventure games go. There is always a sense of foreboding built into the landscape it seems. It’s enough to keep you on edge, even if you happen to be in a wide open wilderness. They do this subtly, like putting a dead tree in the foreground when overlooking an otherwise picturesque landscape. It’s a nice way to put art into the story, to make it part of the overall package. Atmospherically, Memoria really rocks.

Once the cutscene ended I was standing in a rundown antechamber. The art was beautifully done in every sense of the word. Here was when I remembered one more fact about Daedalic games…they are hard. Not the throw your remote or controller at your nearest sibling hard (see: Divenity Dragon Commander), but more like it’s going to take all of your problem solving skills to solve.

Music in this game is great and I love the voices are great. Overall, the score fit the game well and enhanced the experience. Sound effects were also really well done in Memoria.

Overall Memoria is a must own for adventure fanatics. The story will suck you in and never let you go. While the point and click genre may be a large game of follow the leader, Daedalic is blazing a whole new trail of its own. Memoria earns 4.5 Gin Gems.