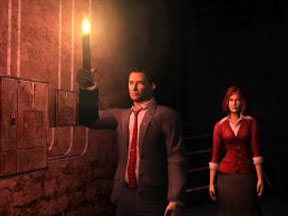 When I popped the Da Vinci Code into my PS2, I must say I did so with a fair amount of prejudice. I didn’t like the book, and I liked the movie even less. I had an ominous feeling that this game was going to beat into my mind the idea that Jesus had kids and Leonardo da Vinci was in on the whole thing. Obviously there had to be boundless codes and other bookwormish conundrums to be cracked, but how would this be made better than the daily crossword in the newspaper? Why is this game rated "T"? Will anyone but fans of Myst-style games enjoy it? Why Tom Hanks?

Using my cryptex I have deciphered the answers: hand-to-hand combat, flagellation and religious heresy, maybe, and because Ron Howard loves him.

As I began to take control of Robert Langdon and Sophie Neveu my trepidations were instantly realized as the first couple of chapters in the book were relayed to me through lengthy cut scenes. You have the option of skipping these word for word renditions of the novel, but you also run the risk of missing clues or your new objectives.

The story is basically a video game of the movie of the book with a few deviations. It’s safe to say you won’t be terribly surprised or disappointed if you saw or read either.

The game forces you to play as both Robert and Sophie which mirrors the shifting view points of the book’s chapters. Neither of the character’s actions is different as you basically walk around in the third person crouching in stealth, examining everything in the room, or initiating fisticuffs with anyone who stands in the way of righteous sleuthing.

The combat system is tricky at first, with you either going on the offensive or being forced to dodge your assailants attack. In both offense and defense the combat boils down to pressing a series of buttons and watching as you beat the attacker senseless.

Apparently lifting off God of War is en vogue. You can also ambush enemies by enticing them with a couple raps in the wall, but this is not how I envisioned a Harvard professor decoding da Vinci, and the "struggle" system of combat seems really out of place throughout the entire game.

While you’re not knocking out guards, you will be solving puzzles. This is where Da Vinci Code fanatics will hyperventilate, decrypt words, and then feel instantly smarter for knowing the anagrams presented in the book and movie.

There are more than word puzzles, however, and they usually involve finding items in a room and using or combining them in precise sequences in order to move forward. In this respect, the game does well. Though the system for sorting out your acquired knowledge and items is tedious, it’s gratifying when it all comes together. Most of the brainteasers will not have you applying to an Ivy League school, but they will satisfy your need for a Su Do Ku substitute.

Your decoding extravaganza will allow you to visit most of the locations set in the movie and novel. Though they are not eye popping, they are done justice with sufficient background effects. The characters are also rendered well, but occasionally the controls sometimes translate to clunky movements. The voice acting, while not done by the actors in the movie, is also decent.

The one thing that falls flat in the game presentation is the score. We get generic orchestral and choral movements that fail to produce any sort of mood.

I honestly wanted to hate the Da Vinci Code in all forms of media, but after playing the game I realized that the subject matter, maybe in better hands, could be intriguing and fun. While not necessarily bad, this game unfortunately tries to integrate gameplay elements that simply do not fit in the world of religious code cracking.

The Da Vinci Code seems to be specifically made for hardcore fans, though puzzle gamers might also find something to like. For the rest of us who want a better blend of riddle solving and action, we must continue our search for answers.