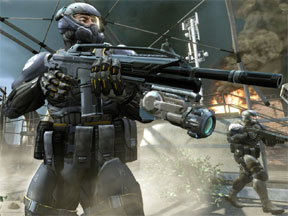 Crysis 2, the long awaited sequel to one of the most amazing first person shooters to ever be released on the PC, is finally here. The real question though is does it live up to the hype? Well how about we look it over and find out.

The story of Crysis 2 left me asking some major questions, and while I’m not going to spoil anything for you, let me just tell you right now that you should throw away almost everything you learned about in the first Crysis. You’ll be in control of Alcatraz (sorry Nomad fans but it isn’t him), a Marine sent out to help Prophet (one of the main characters from the first game) evacuate a scientist by the name of Gould out of New York City. On your way there you will be attacked by the Ceph (the aliens) and your whole squad will be killed off. At this point Prophet will save your sorry butt. Next thing you know you’ll be waking up in Prophet’s Nanosuit 2 as he leaves you with a cryptic message about finishing what he started. This sets you up on a journey to stop the Ceph while trying to figure out what Prophet has planned.

If I could think of only one word to describe the whole story of Crysis 2, it would have to be "mind blowing." Yes I know that’s two words but you get the point.

The gameplay in Crysis 2 has been streamlined to make it easier to access. I’ve heard some complaints that this makes the game way too simple, but honestly having played the first one, I love what Crytek has done here. Armor mode and stealth mode have been moved to a single stroke of a key, which both activates and deactivates them. Most of the keys are located in just the right places so that you’ll feel comfortable while playing. My only complaint is that the crouch/slide key has been moved from the Ctrl key to the C key. It took me a little while to get use to but I understand why it was done. If you are trying to slide by holding the Shift key and then pressing Ctrl then it is incredibly hard to pull off. So yes it’s justified, but I like to change it when I play multiplayer (if you play a Sniper you’ll understand why).

As for the actual gameplay, it’s fast and furious. You’ll find yourself running through the streets of New York City at full throttle only to slam on your brakes when you see a group of enemies waiting for you ahead. Here comes the real fun of Crysis 2 when you ask yourself "How do I want to dispatch these guys?" Should I run in at full speed with a shotgun and blast people as I run past them? Do I want to switch my rifle to semi-auto and equip a scope to snipe them from afar? Maybe I should just activate my armor and tank my way through them? No matter what you do you’ll have fun doing it. These kinds of choices are all throughout the game, and will leave you playing through over and over again just to try out different strategies.

One small note that I want to talk about is the guns in Crysis 2. There is no such thing as a "bad gun." Every weapon has a purpose and style that it fits with. You won’t just find yourself immediately switching out one weapon for another because it’s more powerful than the one you’re holding. Instead you’ll be looking for weapons that fit your play style the best.

Being that this is a Crysis game, I almost don’t feel the need to mention the graphics, but I suppose I should. The graphics are amazing, as expected. The streets of New York City come alive and leave you feeling awestruck by the multiple superstructures all around you. As if this isn’t enough, the animations in the game are about as good as it gets. Enemies will tumble and roll if shot in the leg, or spin and grab their shoulder if shot there. Amazing detail was put into all of the graphics and animations in this game, and this world will really draw you into it.

Along with the amazing graphics and animations we have great audio to go with it. The voice acting in this game is superb. The characters are filled with emotion and really do leave you feeling like the world is in danger and you have to save it. Along with the sound effects of an explosion happening right by your ear or gunfire shooting above your head you’ll be left with feelings of excitement and franticness as you tear through the battlefield. Oh and I can’t forget to mention the soundtrack. Prepare to have your ears assaulted by the best of the best when it comes to over the top music that makes you feel freaking epic!

The final thing I want to talk about is both good and bad. The multiplayer in Crysis 2 is filled with depth of customization. Whether you want to play a shotgun totting tough man that runs through crowds of people or a stealth assassin whose only friend is the sniper rifle in his hands (me!), the game is ready for you. From abilities that allow you to take more damage or those that make you stay in stealth mode longer, you’ll find everything here that you need to become the ultimate warrior.

Here comes the problem though. You have to be able to play multiplayer if you actually want to do this. Always one of the downfalls of PC gaming is actually having a multiplayer that runs smoothly. Now I understand that almost no game gets it right in the first couple of days and that being said hopefully by the time you are reading this it will all be running well. So while I don’t want to count a little bit (ok, a lot) of server problems against Crysis 2 because in the end we both know that Crytek will fix it (or at least they better if they want anyone to buy Crysis 3 when it comes out), in the end I have to because of how much frustration I’ve been caused. Games aren’t supposed to frustrate people Crytek, other people are supposed to frustrate us when they ruin our kill to death ratio and even then we are having fun as it happens.

So to answer the question at the beginning of this review, yes Crysis 2 is an amazing game that is almost a life experience more so than a game. Buy it, play it, love it, hopefully destroy your friends online in the near future and look forward to Crysis 3 so that we can get some questions answered!