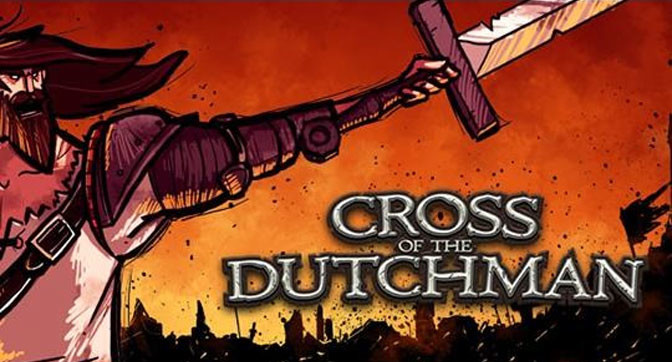 Cross of the Dutchman

Have you ever sat down and wondered about the legend of Pier? No, not the place where you dock your boats: Pier Gerlofs Donia, from Friesia. Cross of the Dutchman is an isometric beat ’em up in which players control Pier and fend off a Saxon invasion, largely by himself. Whether or not this is a legend worth re-telling or something that should be lost in history (or Wikipedia) is something that will be elaborated upon further in the review. What? I need some way to get you to read the rest of this, don’t I?

The story of Pier Donia is a tale about a single man’s guerrilla warfare against an invading army inspiring surrounding villagers to push back against the Saxon foe, and the story sticks fairly close to several events that unfolded, though the presentation is much more lighthearted than the source material was, with even some humorous dialogue thrown in every so often to entertain the player.

Taking on foes is a simple task in Cross of the Dutchman, as you initially only have access to a basic attack and charge attack that’s governed by a stamina meter. Players can upgrade Piers by finding the bevy of chests hidden throughout the world, which can give him what he needs to upgrade health or unlocking new techniques such as a spin attack that was extremely helpful in taking on a group of enemies simultaneously. In the beginning, players will probably wind up being taken out very quickly if surrounded, so engaging in hit and run tactics until the sweeping techniques are learned is a great way to finish the early game without dying even once.

Unfortunately, that’s about all there is to the combat. There is no way to block, only six special techniques that are split between sword and fists, nor a dodge. If you’re thinking that makes the combat extremely simplistic or dearth of strategy, then you have the right idea. Outside of getting ganged up on like the one kid with gum in a classroom, there’s no real depth to the combat which is a shame for a brawler-type title. Cross of the Dutchman is also extremely easy, so long as you don’t run headfirst in a large group of enemies and get surrounded. There also only seemed to be two types of enemies- melee-type foes and ranged enemies, so once you encounter one of each, you’ve pretty much got a grasp on all there is to offer.

Piers’s adventure will largely encompass just a few locations, as you will spend a large amount of time moving back and forth these six or seven places for the duration of a playthrough. Piers, himself, states that he, “Feels like an errand boy” at the beginning of the game, and due to the amount of backtracking (mixed with how short the game is, a scant three or four hours) made me feel like a delivery boy for the Face-Punch Express than some kind of Frisian hero.

The music and visuals are actually extremely good for a low-budget game. The score matches quite well with the theme quite nicely, with a nice selection of satisfying sound effects to boot. The models for most objects in the environment are quite simple, but the texturing and lighting are so colorful and vibrant that it fits the cheery vibe of the game, very similar to Torchlight. One nice note is that the clothing of the villagers, in particular, seems to be a very accurate representation of medieval outerwear.

As mentioned earlier, Cross of the Dutchman is extremely short. My Internet connection went out for about three and a half hours, and the game was finished before service was restored. More than likely another hour could have been squeezed out of the game by thoroughly searching each location for more treasure chests, but the actual incentive for opening them is for no purpose other than simply collecting all of the achievements.

Cross of the Dutchman is a game that is very easy, short, and simple, but perfectly playable in all ways as there is nothing inherently wrong, it’s just very average at what it does. Those searching for a skill-intensive beat ’em up definitely need to look elsewhere. However, there is value to the game due to its Dutch war setting- the cheerful portrayal of the bright source material may make this a decent pseudo-educational game for a child, which would only be helped by the combat being simple enough to pick up without major issue.

The lack of depth and very short run time make it a poor choice for someone wanting a lot of bang for their buck. Those who just want to experience a nice, brief story with some easy, relaxing gameplay may enjoy Cross of the Dutchman, or perhaps this can be a game for your children to play since it has easygoing combat and a vibrant aesthetic. Those who are achievement hunters can get quite a good number in a short time, as well, for those who enjoy such a thing.