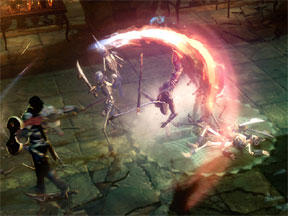 After a long absence, the beloved Dungeon Siege series returns in Dungeon Siege III. And of course the biggest news is that for the first time, the series is able to be played on consoles, in high definition. This was thankfully done without abandoning PC players, who can also get the game for their favorite gaming rig.

I am a longtime player of the series, and am very impressed with how DS3 was handled. When the first game came out, it was quite an experience. I still remember taking The Farmer on her first adventure. When I found that first dungeon, hidden in the cellar of the seemingly abandoned house, I was amazed. The balance of exploration, loot gathering and combat was perfect. The second game followed the same tradition, but did get a little convoluted. Your party size grew almost too large to the point where it was more like playing an RTS than an RPG. I admit I kind of lost interest in DS2 and stopped playing about halfway though, and am so glad that DS3 went a different direction.

One major point of concern that most people had with DS3 was adding this game to the console. With such a huge PC-exclusive fanbase, the fear was that all the emphasis would be placed on console playability, and the PC would be little more than a poorly done port. That’s not the case. The PC version of the game plays well and runs extremely smoothly, even on systems with less than cutting edge hardware. But I think that if you really want to enjoy this game to its fullest, you should pick it up on the 360 or PS3. This is due mainly to one feature that developer Obsidian Entertainment thankfully added to the game: couch co-play.

Whatever happened to playing a game with a friend, while actually sitting in the same room with them? Even on the PS2, there were tons of fun games that offered this function. My wife and I logged many happy hours battling bad guys in Champions of Norrath and Baldur’s Gate, plus Brotherhood of Steel and other more obscure titles. Like Obscure for one. But when I got my PS3, the expected stream of games like that never happened, other than endless Guitar Hero type titles. To play with friends I had to use the network, and even with voice chat, it really wasn’t the same. A few titles like Borderlands tried to implement in-person playing, but split-screen gameplay is not for everyone. It appeared that the top-down, same screen interface was dead.

Enter Dungeon Siege III. Here we have a game that looks amazing, and can be played by two people sitting together. Feel free to give helpful advice to your partner, or more likely, yell and scream when they are doing something stupid and you need help. This is the first game in many years where my wife asked me to play it with her almost every evening.

The coolest thing is that DS3 is really setup to easily let two players tackle hoards of monsters together. There is no friendly fire for example, and in fact, many of the effects that damage monsters can be used to heal allies at the same time. What’s better than a wall of flame that burns your enemies? How about one that you and your friends can stand inside and heal up? And every character has unique abilities that help in combat, and can really let them stand out and be a hero from time to time, depending on the situation. Abilities can even be used together for devastating effects, like a push attack that moves bad guys into an area of effect damage field, or a slow attack that holds them at the perfect range to get chewed up by your partner’s ranged weapon. There are even summoned allies, which are pretty darn cool when you’ve got more than one on the field working together. Oh, and you can play with up to four people remotely, if you really don’t want to sit that close to your friends.

Graphically, DS3 is really stunning. Crypts are spooky, with really nice extra bits of flair like chains that hang down and move when you pass through them. Caves come alive with glowing fungi, cities are mostly bright and bustling, and the woods are so beautiful that you almost won’t believe the dangers they hold. And there is a lot of cool stuff to smash up too, which is always satisfying, especially when objects explode in a fountain of gold coins or collectable armor.

Besides the environment, spell effects add a colorful burst to combat. Both your characters and your enemies will use magic that looks as good as it hurts.

The sound is also good, though not quite as polished as the graphics. On the plus side, the music and environmental effects are amazing. On the negative side, the voice acting is sometimes a little dull, especially when some random NPC decides to tell you the entire history of whatever side quest they are offering, complete with a long talk about their family and the weather and the really important history of the…

There are four playable characters, and each of them is different enough that you should be able to find one that matches your favorite style of play. Lucas Montbarron is the up front fighter, perfect for those who like to wear big armor and go toe to toe with foes. He’s the tank of the game. Reinhard Manx is the mage, though he’s different from most RPG mages. He uses a combination of technology and sorcery, as well as a mix of ranged and devastating close-up power slams. In a lot of ways, he takes the role of a damage-per-second thief type in most adventures. Anjali, my favorite character, has two forms. In her human form, she performs a lot of sweeps with her big spear that can be used to crowd control most on-rank enemies. In her fire elemental form, she blast foes at range, hits them with pillars of flame and creates lakes of fire that are deadly to opponents, but which heal herself and her allies. She also gets to summon a pet elemental very early in her experience chain. In a lot of ways, she fills the true mage role of most games, though she can kick butt up close if needed. Finally there is Katarina, who is the ranged specialist. Armed with a powerful but slow-firing rifle in one stance and two rapid firing pistols in her second, she provides the artillery support for any other character. In fact, I would highly recommend using her as your second character. Paired with any other hero, she is an especially deadly foe, especially when she gets her special abilities powered up.

Gameplay itself ranges from very easy to very hard. Just plodding along the game world, you probably won’t have any trouble. Combos are easily performed by hitting the basic attack button three times, so there is nothing to memorize. However, some of the boss battles can be ridiculously difficult. You can change the difficulty level in the game, even on the fly, but be warned that most bosses will still require a real strategy to take down as mashing the simple basic attack button won’t cut it, especially when they summon allies. The difference between basic gameplay and the difficult boss battles can even be a little off-putting.

Another slight negative is that to some extent, the game does seem to be on rails. In the previous Dungeon Siege titles, there were extra places to explore and even extra dungeons to sometimes find. Here you are pretty much stuck on the main paths. You can wander down little side alleys from time to time, and I would highly recommend that you do because they often contain hidden treasure chests, but for the most part you will be staying on target and not doing much in the way of side-quest exploring. In fact, almost all the side quests can be fulfilled while also completing your main goals for that chapter, so there is no reason not to take them when they pop up.

In the end, Dungeon Siege III is a great game that offers a much needed return to couch co-op, but can also be enjoyed alone or with people over a network. PC gamers should enjoy the ride and appreciate its roots, and for console players, well, this is one game that you need to have in your collection. It will make you thankful that you bought a console in the first place. Dim the lights, grab a friend, and have a wonderful time exploring the kingdom of Ehb.