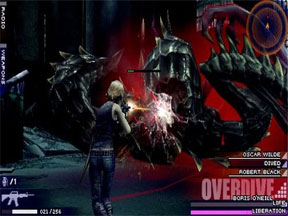 The 3rd Birthday (T3B) as you may have guessed is the third installment in the Parasite Eve (PE) series. For the longest time I had assumed that the Parasite Eve franchise was long and dead. Evidently Square had some other plans though for our good friend Aya Brea.

T3B has a deep story that is filled with twists and turns that fans of the RPG genre will love. You’ll start out as Aya Brea, who has lost her memories and is now working with a government organization known as CTI.

CTI’s purpose is to use Aya’s newly developed ability Overdive, which allows her to move her conscience from person to person, to send her conscience back in time (Final Fantasy 8 anyone?) to when the Twisted appeared. The Twisted are a strange group of creatures that appeared out of nowhere two years ago and started rapidly killing people and turning them into new Twisted.

I like the idea of changing the past to save the future and T3B does a great job with it. There is news stories throughout the game that will change based off of what you do in the past. Such as one that gives an estimation of how long humanity has left or another that tracks the total number of Twisted. These articles make it easier to track what you’ve been doing to slow the advancement of the Twisted.

Gameplay in T3B isn’t exactly what you’ll find in the average RPG. I guess this is because there is so much more happening here. Aya is controlled from the over the shoulder view found in many third person shooters like Resident Evil 4 or Dead Space. Unlike these other survival horror games though T3B has a lock on feature so that Aya doesn’t have to worry about pin point aiming, which is great since most of her concentration should be focused on dodging.

Why is dodging so important? Well because every last creature in this game is incredibly more powerful than Aya is. So much so that two or three hits are all it will take to kill Aya, don’t worry though. T3B isn’t shy about letting you know that soldiers are expendable. If your current host dies you can just target a new one and Overdive into them. Granted there are a limited number of soldiers on the field so don’t go turning them all into suicide bombers or else it will be game over in no time.

The Overdive mechanic is a fun addition to the PE series. It adds a great amount of strategy to the normal gameplay of a third person shooter and is a great central point for the plot of the game. I can see Square squeezing one or two more PE titles out with this system before it gets stale.

As I stated before T3B is an RPG. So of course there is a level up system. Leveling up will increase stats and unlock new abilities for Eve…oops I mean Aya to use. As well as leveling up Aya the game also allows for weapons to be leveled up. This isn’t much of a surprise since weapon level up was in both of the previous PE titles.

As I have often said before I don’t know why I should even have to talk about the graphics, but here it goes anyway.

The graphics is T3B are absolutely stunning. Incredible amounts of detail are given to each of the characters and environments are beautifully disgusting.

One thing that should be mentioned though is Aya’s clothes. Aya has multiple different outfits that she can wear into battle. Each outfit has its own advantages and disadvantages. Such as more armor for less maneuverability and vice versa. One thing to note though is that the more damage Aya takes the more battle damage her outfits will have. This means that almost every mission will see Aya running around almost completely naked.

I always liked Aya because I felt that she represented what a strong female character should be. Sadly though this game has gone so far as to add a gallery where Aya can be viewed in all her different outfits with the varying degrees of battle damage while she poses for the camera. I was hoping that developers wouldn’t follow Team Ninja’s example of how to ruin a strong female lead, but it looks like there is still a ways to go before the industry understands that women aren’t in games just for guys still living with their moms to ogle.

Sexism rants aside let’s continue with the review.

The voice acting and soundtrack in T3B are superb. Yet again Square cast all the right actors for all the right parts. I’m not surprised since having amazing graphics and audio is what Square is known for.

So all in all The 3rd Birthday is a great game, the story is amazing, the gameplay is amazing, and the graphics and audio are amazing. Despite the attempts of Square to ruin a strong female lead The 3rd Birthday still delivers in all other department. So while sexism still abounds, know that the game is worth playing.