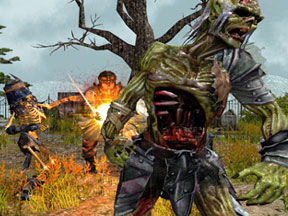 Sacred 2: Fallen Angel is a fantasy RPG that focuses more on massive combats, a huge world to explore and customizing your character than on the story. You can play a solo game or get another player to join you on your PS3 or Xbox 360, or three players can play with you over the Internet. Also, you can have two people locally and two people remotely playing.

Those of you with PCs might recognize the title because it came out for the PC in November of 2008. Flush with success there, it was ported over to the PS3 and Xbox 360 consoles. It is here that we picked up the game for review, on the PS3 to be more specific.

Now just to start off, I am more of a story driven player, and with the story lacking in my opinion, I found that playing with others really was the highlight of the game for me, which is where it really shines on the console.

There are six character classes in the world of Ancaria. Two of these are limited to either the campaign of light or the campaign of shadows; the other four races can chose which campaign to follow. The six races are the Seraphim, High Elf, Dryad, Temple Guardian, Shadow Warrior, and Inquisitor. The Seraphim is locked into the Light campaign while the Inquisitor is locked in the shadow campaign.

The Seraphim character is skilled in weapons, technology and magic. The High Elf is more focused on Magic. The Dryad is skilled with magic and ranged weapons. The Temple Guardian is a cyborg canine creature with a battle arm; he is focused on technology and combat. The Shadow Warrior is an elite warrior that was raised from the dead. And finally the Inquisitor focuses on either close combat, dark magic or conjuring. All of the classes may ride a horse and may engage in combat on the horse, but my not use combat arts unless they are mounted on their special racial mount, which is gained by completing a quest within the game.

As you move around the world of Ancaria you will fight many, many things from giant bugs to dragons. After you kill them you collect stuff and eventually when you reach a town you will trade in all of that stuff and buy things to improve your character. Like any RPG there is also a main quest chain and many side quests to help keep things moving, but none of them are particularly engaging, though a few can be rather funny if you think about them.

As you improve your character more combat options opened up, which can make things a lot more complicated. Make sure to use the customizable button options to setup the combo presets you use often. Otherwise you will end up digging for the skills you need. Given all the options, Sacred 2 does a good job with combat once you get the hang of it, though I can see where it would be a little easier to play on the PC with that nice full keyboard right in front of you.

The world is expansive with a variety of forests, islands, swamps and deserts. One of the first issues that I had was given the size of the world, it’s really hard using the map to figure out how to get from point A to point B. Often you will think you see a path only to discover that the way is blocked by an impassable obstacle that you could not see on the map. There are warp gates which can help you get around, but you have to discover those before you can use them.

The characters themselves can be pretty funny. They make comments while fighting. Also while in combat you will hear a lot of sword clashing and spells blasting which make the combats pretty cool.

If you like killing stuff this game has a lot of that and you will enjoy it, especially if you like doing this with other people online. Now if you’re more story driven like I am, you may find this game a bit disappointing. It all depends on what type of game you are looking to purchase. It’s not a deep RPG by any means, but is a pretty kick butt hack and slasher.

Editor’s Note: This was originally a PC game released in November 2008 that was recently ported over to the PS3 and Xbox 360.