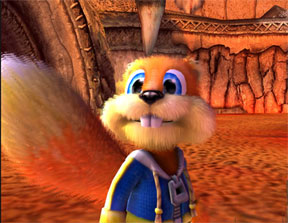 When I heard that Rare would finally be releasing Conker to the Nintendo 64, my first impression was "about time, yet another Rare game that took forever to develop is finally showing up." But what took me by surprise was when I heard that he would not be in a kiddie-friendly platformer. When I heard the first teasers for Bad Fur Day, I was in shock. Not only the fact that Rare did a complete 180 with the character and adult dialogue, but what really shocked me was how Nintendo was actually allowing a game like BFD on their console.

Then again, I said the same thing when Nintendo authorized an uncensored Mortal Kombat II as well as DOOM on the SNES.

But now, Rare is no longer a second party developer for Nintendo; they have defected over to Microsoft, but so far their turnout has not been impressive. Their first title, Grabbed by the Ghoulies, left a lot to be desired. Also, where is Perfect Dark Zero? Yes, I know it is announced as a launch title for the XBox 360, but it was originally designed for the XBox (as well as the Gamecube prior to defection). The same could be said about Kameo: Elements of Power.Conker was announced for the XBox as well, and for an adult based system, it seemed to fit rather well. Not only would the adult content fit its intended audience, but a new multiplayer content made a perfect fit for XBox Live. For most of its efforts, Rare succeeded.

The multiplayer aspect of the game is a complicated, team based shooter experience. Anyone familiar to the Battlefield series will feel quite at home with it, but it will take a lot of time to get used to the controls (in game menus are accessed by holding a button down and moving the analog stick towards an option, similar to Perfect Dark), plus there is a lot of information to access. But for those who really get into the multiplayer, they will be rewarded with upgrades that make the online venture much easier.

For single players, not only is bot-based multiplayer available, but a complete remake of the original Conker’s Bad Fur Day is available. And for anyone who hasn’t played it on the Nintendo 64, this is the chance.

Bad Fur Day begins with Conker at a bar getting horribly plowed the night before. Waking up from a severe hangover, he finds himself in a strange world, and all he wants to do is get home. However, he won’t be going home until he deals with a motley crew of weirdos, including redneck pitchforks, a mouse with a bad gas problem, a large caveman with a "big bone," and a panther king who wants to use Conker as a table leg so his milk won’t fall over.

And then of course, there is what can be considered the funniest boss in the history of gaming: the Great Mighty Poo! Nothing beats fighting against a giant pile of s*** who taunts you by singing opera. The lyrics alone are worth the price of admission, and although they are censored, that makes it even funnier.

Nonetheless, Conker is a very funny game. The dialogue is true British humor, and anyone who enjoys that (i.e. Monty Python) will get a kick out of it.

What is surprising though is the XBox version seems to be more censored than the N64 version. S-bombs are now bleeped out, but you can still hear bits of them before the bleeping. Still, it is a riot to hear.

Also, those who love movie parodies will get a kick of out Conker. Stages based on Saving Private Ryan and the Matrix are a blast to play, and even video games are lampooned. Take a look at the final boss and you’ll see what I mean.

Conker’s graphics are gorgeous. Never before has fur been rendered so well as it is on the XBox, something the N64 could do while maintaining a smooth 30 frames per second. Near the end of the XBox’s lifespan, it is nice to see developers able to squeeze out some more graphical muscle.

After all this time, it is good to see Rare come out with a good XBox title. It will also be interesting to see how they will do with the XBox 360, but in the meantime, anyone who missed the original BFD or wants to re-experience a hilarious platformer/shooter will find no problems with Conker.