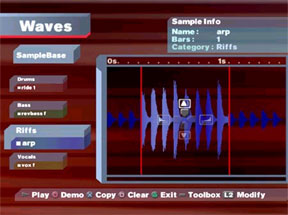 MTV Music Generator 3:
This is the remix

When Codemasters released MTV Music Generator 3, it offered a simplistic interface that makes altering your music a breeze. Its main mode, the studio, allows you to lay down effects for songs in an easy to use grid pattern. Select from a library of drumbeats, bass tones, sampled riffs or voices, and just put it on the grid, and then play the clip to hear how it sounds.

It’s a simple matter or trial and error to find out what sounds good and what doesn’t. But the best part is the fact that there is no true way to make a song, the limits are all up to the imagination.

You are not only limited to the stock samples provided with the disc. Wave effects can be altered, and in addition, eight second clips from audio CDs can be ripped for use in the studio. (Keep in mind that the PlayStation 2 version was reviewed, so I am unaware if the Xbox version will allow the use of custom soundtracks.)

The other mode available is called the Remixer, which takes out the cut and paste features of the studio, but allows altering of any of the featured songs, controlling the set of instruments, their volume, as well as effects and song layout.For a music construction set like MTV Music Generator 3, the concept of gameplay cannot be reviewed. In its place I’d rather rate it on its ease of use. Adding the element of the cut and paste studio grid makes this title a breeze.

In addition, it is also difficult to provide a true rating for graphics. Considering the whole program is a collection of menus and grids, it would be unfair to give an adequate graphics score.

However, the sound quality stands out, as it should. Using my 5.1 surround system I was able to make out all the different samples and edits that I have done. The 10 featured songs by artist such as Outkast (relax, it’s not Hey Ya!), and Snoop Fizzle McDizzle, er, I mean Snoop Dogg, are perfectly adequate for a product like this.

The only thing I really wish Music Generator had is the ability to go online. The possibility to download new samples, in addition to listening to other peoples’ mixes would have been a wonderful addition.

At $29.99, MTV Music Generator 3 is an excellent value for anyone who wants to get started in music editing. Providing a simple to use interface, in addition to the ability to rip samples from your own CDs allow infinite flexibility to any budding music mixer.