Cooking Witch is a very straightforward game with a fairly unique premise: You play as a witch who wants to cook…children. You fly around a landscape, dodging attacks and snatching up children to best make them in a stew. A simple casual game similar to Jetpack Joyride or any other 2D game with upgrades and repetitive gameplay. So, does Cooking Witch scratch an itch, or should it be put to a Salem trial? Let’s find out. 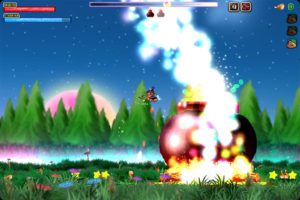 The goal of Cooking Witch is extremely simple: You fly around, gathering as many children together as you can, and toss them into a giant cauldron so you can collect the meat that pops out of it. Each run is timed, and when daybreak comes the game is over. Dodging hunters/parents that try to shoot you down with guns and fireworks will help you most efficiently stew up some children. Some kids restore your health when cooked, others may just provide meat, or stars that lengthen the gameplay timer.

Difficulty is largely introduced by children that try to ring a village bell to alert adults to the fact that a hungry witch is flying about, as if a kid does ring it, then angry fathers with guns will try to drop you like a sac of pagan potatoes. Fathers that try to shoot you out of the sky can be knocked out by dropping a child on his head and knocking him out, eliminating the threat. 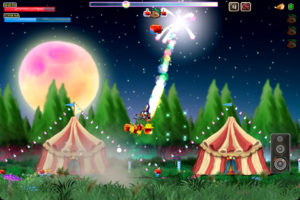 As you play, you’ll be able to unlock more bonuses for the witch character. At the start, you can only carry one child at a time and it slows you down quite a bit, but you can upgrade your broom’s capacity, its strength so that you’re slowed less while carrying victims, and even increase your stamina so that you can fly around while carrying someone longer. The cauldron can similarly be upgraded, as you can use it to produce more meat, stars, etc., to more adequately control the game’s timer, itself (I don’t know if the game can go on indefinitely, but after a few upgrades a game can last quite a long time). 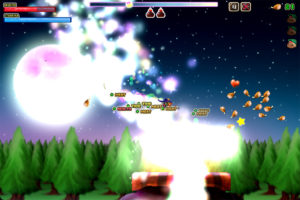 Cooking Witch is a simple type of time-waster game- the graphics are not overtly impressive, which makes sense since it’s a very cheap game with a simple concept in mind. The visuals are bright and colorful, and there was no noticeable slowdown during the game at any reasonable point (the caveat is there simply because when you have over a hundred +Time, +Meat, and +Health bonuses flying around on screen simultaneously, the game may suddenly be prone to crashing). There are no other backdrops or environments apart from the default one, however, so there is little variety, visually, in the game. The music is easily one of the best parts about Cooking Witch, though, as its soundtrack is composed of a variety of solid classical pieces that give a surprising amount of eerier cheer given the amount of mayhem going on in the gameplay. 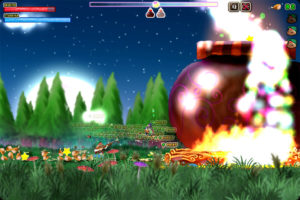 Those who hate kids would easily find the concept of Cooking Witch amusing enough. As a $2 game, it is playable in short bursts to offer some quick entertainment during downtime. However, due to the overall small amount of content, it’s not exactly a title for those seeking a deep game to sink teeth into. There’s not really a lot to say about Cooking Witch, as it’s a short little game that’s as straightforward as it is amusing in small increments. Those who don’t like simplistic games, score attacks, or casual games should probably stay far away from Cooking Witch. Those who are more open for a new game to mess around with in between coding sessions or something might actually get decent mileage out of this game’s low price of entry.