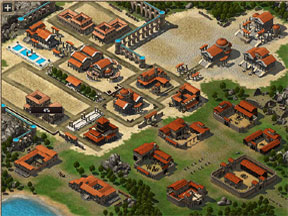 I’ve spent quite a lot of time playing games relating to the Roman Empire, one of the most fascinating times in history. Going all the way back to Sierra’s The Rise and Rule of Ancient Empires through the excellent Caesar series and about half a dozen standalone games in between, the Roman Empire makes for a great bit of empire-building gaming.

But looking back, there is one real flaw that all of the games I’ve previously played had, and that is they were designed to be played alone, or had very limited multiplayer capabilities. Perhaps you could invite a few friends to build and battle with or against you, but all of them had to buy copies of the game, and finding gaming friends with similar interests is not always easy.

Today, the gaming world is all about massively multiplayer games, and Romadoria follows this trend. Finally, here is a build and conquer game set in Rome that has thousands of other players. And the price is right too, because this is one of the new free-to-play games. I’ll explain how that part works in a bit, but let’s look at gameplay first and foremost since that will make or break any game, online or otherwise.

In Romadoria you begin with a single colony. You’ve got an aqueduct and a pattern of streets, but not much else. You are given quite a lot of coins to begin with, so you can start building stuff right away.

Building up your colony is not too difficult. Every building has a place it can go. So every colony will look pretty much the same, other than what buildings are actually constructed inside them. When you click on a plot of land, the game tells you what you can build there, what the building does for you, how long it will take to go from dirt to four walls and a roof plus any requirements like research technologies that need to be learned before you can build.

There is a little tutorial that follows you along at first and tells you what buildings you should create and in what order. This was very helpful because the interactions between buildings can be a little overwhelming at first. Without the tutorial I think too many people would get lost. With the tutorial, anyone should be able to ease into the game.

So Romadoria is free to play, and I like to define what that really means. Here, it equals a really good balance where people can play for free with no penalty, but those who enjoy the game and want to speed things along can do so without spending too much money and without getting an unfair advantage over the free players. Of all the systems for sorting out free and paid players, I think Romadoria is one of the best.

How it works is that buildings take time to construct. Some smaller buildings might take 30 minutes or so, while larger ones like the legion fort that protects your town could take almost two hours. You can wait for the construction to complete, or you can give wine to your workers. Unlike real life, pouring copious amounts of alcohol at your men actually makes them go faster. So you can wait thirty minutes for your academy to complete, or you can spend four units of wine and get it done instantly. Also, I felt that the wine costs were not too expensive. You get free wine for meeting certain achievements too, so that’s a nice touch. All in all, I feel that Blackmoon Games is being very generous with how they assign premium rewards to paid players.

Building up your town is one thing, but eventually you will want to march out into the world and start battling. This can actually take a while and if I had one suggestion for Blackmoon it would be to bring this part of the game to the forefront a lot sooner. The forums had a lot of people asking when they would be able to fight. And the combat interface is really good, so I would think the developers would want people to experience this sooner rather than later.

There are a lot of things that go into building up your legion. First you need a building that creates food for them. Then you need a building that creates lead sling bullets. Then you need to have built a fort to act as their HQ. Then you have to research a bunch of different technologies depending on what types of troops you will use. And finally, you actually need to build the legion itself. I appreciate that a lot goes into warfare, but am a little afraid that players might get overwhelmed with all the preparations and not stick around long enough to get to the candy at the other side: the actual fighting.

Battles are some of the best for an online strategy game that I’ve encountered. You actually get to see individual units maneuvering around on the tactical map. Pieces are setup almost like a chessboard, and then they fight with some really good graphics. You really get a feel for what units dominate other ones watching them. You’ll get to experience this both on offense and defense as you play.

And there is a lot going on in Romadoria in terms of clans and plots. This is not the easiest stuff to find, but if you spend time on the forums you will get offers to join various clans, all of which are trying to become more powerful. I logged on quite a lot during the testing of this game, at all hours, and never once found a dead time. In fact, there was almost always a moderator online (you can tell because they speak with green text while everyone else is white) who answered questions from me and other players.

When was the last time you played a free-to-play online game and got good tech support? It’s obvious that both the players and the developers put a lot of pride into Romadoria, so if you get confused about something, just ask. That was quite refreshing to find.

Graphically, Romadoria is quite good. The battles are particularly cool, but even the town looks good. It’s pretty much what I’ve come to expect Roman Empire building games to look like. Nothing is out of place and you can tell at a glance what everything is, not that you couldn’t mouse over it if you forget.

Romadoria is a bit like a blue-chip stock in that the more you invest in it the more you will get out of it. It takes a lot more brain power than a normal online strategy game, but that means you also get more control and ultimately more fun. And the robust community and helpful administrators really set it apart from the pack. Finally, the free/premium structure is more than fair, it’s generous. You don’t have to spend any money if you don’t want, but if you like the game, a couple dollars here and there can improve your enjoyment even more. And the wine merchant girl is really cute too, so be sure to visit her.

Of the new crop of online strategy games, Romadoria is aiming for the top. It’s still in beta at the moment, though I didn’t really find any bugs other than a couple minor things like new buildings not updating on my screen after I began construction on them. But there are no bugs that rise above minor annoyances, and you are welcome to play immediately.

Romadoria captures the flavor of the Roman Empire building and fighting games of old, but adds in the exciting elements of being part of a robust community filled with sinister plots, loyal allies and just about every type of person in-between. Come, see and conquer Romadoria. You won’t be disappointed.