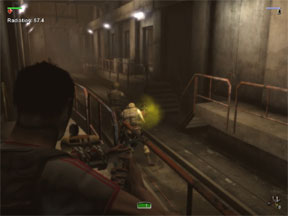 Any true reviewer-at-heart has to love a game where an unsuspecting journalist turned "most wanted" finds himself, framed as a secret CIA spy/assassin in the middle of a huge overseas government scandal armed with nothing more than his wits and a nifty camera that is a little more than meets the eye- unbeknownst to him. Or do you? At any rate, fresh off the presses is a new stealth/shooter, "Cold War", developed by Mindware games, which looks to be a title promising a little intrigue, a little espionage, some classic stealth, and of course the usual high stakes journalism.

You play as Matthew Carter, a freelance American journalist, who is visiting the former USSR at the height of the Cold War for his own personal business ventures when he catches an earful of a juicy lead regarding a secret meeting between the President of the Soviet Union and his board of political advisors. Obeying the "Paparazzi" in his blood he decides to locate the place of this secret meeting and perhaps get a few priceless snapshots of this mysterious rendezvous.

What he has yet to understand, though, is that this meeting is bigger than "Watergate." It turns out that the country’s trusted board of political advisors believe the KGB is plotting a coup attempt against the President to oust him out of office and ultimately control Mother Russia. They have every intention of releasing this valuable information to the President so that they can publicly expose this huge international conspiracy.

But the KGB is always one step ahead of the game. They learn of this secret meeting well ahead of time and they even learn of Matt Carter’s recent arrival in the U.S.S.R. They meticulously plot to bait Carter to the disclosed locale -which oddly enough turns out to he Lenin’s tomb- and frame him as an undercover secret agent sent here to eliminate the President and at the same time make it look as if the board of advisors set the whole assassination attempt up. Now just twelve hours after arriving in Moscow, following a whirlwind of sabotage, Carter finds himself stripped of all his possessions, beaten unconscious, and thrown into a political KGB prison. Using nothing but recovered weapons and improvised gadgets, he must evade or overcome elite Soviet forces to expose this conspiracy for what it truly is before he’s sent to a Siberian camp or killed.

First glance at Cold War will automatically make you believe this is some kind of generic "Splinter Cell" clone. Well that actually wouldn’t be too far from the truth. However, the game does manage to grasp a little uniqueness of its own.

For instance Sam Fisher of the Splinter Cell series IS actually a secret government agent, highly skilled in weapons handling and a true stealth specialist. Matt Carter is just your average everyday news journalist, who has about as much combat skill as Sam Fisher does in his pinky finger. However, Carter is quite the photographer. Eat your heart out Sam.

On the contrary though, Sam is not so much known for his brain more than he is his brawn. In fact, who knows how well Fisher might do without the radio and surveillance assistance of his own HQ. Matt, on the other hand, is used to thinking for himself. For someone, caught totally off-guard, totally unprepared, and completely out of his element, Matt doesn’t seem to do too bad his first time out.

The beauty of Cold War is that you have this average guy thrown into this highly volatile situation more suited to the likes of a skilled mercenary and while you might think that his goose is sure as cooked, Carter manages to prove time and time again that "knowledge is power." While Matt doesn’t have the necessary physical brawn for this kind of situation, he allows his mind to be his ultimate weapon.

Somewhat of a "MacGyver," Carter puts his smarts to use by taking advantage of his surroundings. As you begin to delve into the game you’ll stumble upon "blueprints" during your travels which educate you on how to build make-shift tactical devices and even weapons. The very first thing you learn to make in the game is rubber bullets which are very useful for knocking out enemy soldiers without killing them. After all, Carter’s a journalist not a stone-cold killer. Need a silencer to keep the noise down? Wrap a med-kit around your handgun. You can also put together special mines with knock-out gas in them to put down your enemies. Later on, you’ll unlock blue prints for an advanced slingshot, great for propelling paralyzing darts at soldiers. Combining simple everyday items such as plastic bottles, cans, and cigarettes can produce some really unique items. Obtaining blue prints also builds tech points. With these tech points you’ll be able to upgrade your weapons and the items you build during your journey.

Ultimately the X-ray cam is Matt’s best friend. It would seem that his camera got a serious upgrade. Perhaps it was simply to be used as planted false evidence by the KGB that would suggest he was truly some kind of secret agent assassin. None the less, this new upgrade is back in capable hands and will prove more than useful for Carter to get out those dangerous jams. With the X-ray camera you can see through walls, detect lasers, render surveillance equipment useless, and even send out EMP bursts to knock out enemy soldiers or explode canisters. It’s the ultimate journalist’s weapon and he knows how to use it.

Outside of the unique item creation factor, Cold War is pretty much a Splinter Cell clone. Not that, that’s a bad thing, it’s just so painfully obvious. The environments very much resemble the usual Splinter Cell format filled with plenty of dark corners, dimly lit rooms and unsuspecting guards. Even though he’s no Sam Fisher, Carter does have the ability to sneak up on an enemy soldier and knock him out with a blow to the back of the head. Afterwards, he can drag him off back into the darkness, and then drug his body so that he sleeps longer. Fisher would be proud.

The bottom line is that while Cold War does offer an exciting new twist to the stealth/espionage genre of game, it is at best a generic clone of a former hit title. It’s a very cleverly put together clone, but none the less a clone indeed. One simply can’t ignore the lack of "innovation" over such excessive "renovation." This game is ALMOST worthy of 4 GiN gems, but even with a very cool item creation system there’s just not enough original content there and we all know "almost" doesn’t count. An above average 3 + GiN gems is my final say.