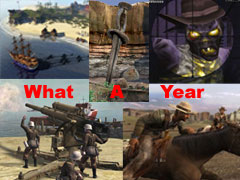 Now is the time of year when lonely editors with most of their staff on vacation write up their annual "year in review" articles. And far be it from us to buck this trend. As I look around the empty newsroom, I don't really have much choice! But thankfully, 2005 gives me plenty to write about.

Starting with the very recent past, depending on where you stand, the launch of the Xbox 360 this year was either the best thing that happened or one of the most lackluster.

Sure there were lines just about everywhere. Even the manager of a tiny out-of-the-way-GameStop in Oakland, Maryland which I visited over the Christmas holiday said they had twenty people in line to grab six units. Our own Todd Hargosh was able to get a 360 only by camping out all night at a local Best Buy, in the rain no less.

Looking at the Xbox 360 myself, there is a lot of potential there. But I have to agree with GiN Playmate Chella when she says there are not a lot of titles right now. Kudos to Microsoft for getting the jump on Sony and launching early, but could we please have a real RPG for the system? Race games are ok, but other than Burnout 3 where you are wrecking cars, they hold my interest for only a short time.

As far as games go, we had a lot of 5 GiN Gem titles to enthrall us this year. In the shooter realm, Call of Duty 2 was a true masterpiece. Launched for the 360 and PC, the game is one part blockbuster movie and one part sheer shooter fun.

On the PS2, Darkwatch combined the creepy vampire genre with shooter action, earning a near-perfect 4.5 GiN Gems, and a slot in my personal all-time favorites list. And don't forget about Gun, which brought an honest to goodness western up to speed in modern times.

For RPGs, Jade Empire showed us what can be done with the same amazing engine that created the Knights of the Old Republic series, while The Sith Lords delved deep into the mysteries of the dark side of the force. In a more traditional genre, Dungeon Siege 2 showed that a sequel could deliver all good things in better quantities without adding in any bad. And super Kudos goes to NC Soft for Guild Wars, the first mainstream massively multiplayer RPG that did not charge a monthly subscription fee. Kudos also to Icelandic developer CCP, who showed us that not all online RPGs have to be set in a medieval fantasy world, as they set their impressive Eve Online in space!

Oh yea, and a little known developer named Sid Meier came back on the scene with Civilization IV, which more than any other game in recent memory gave people an excuse to call into work sick. And that does not even mention his re-make of the amazing classic Pirates game, which delighted gamers all the way back to the Commodore 64 days!

In the RTS genre, Age of Empires III got colonial on our collective asses, taking the series out of the medieval and pre-historic realm and into the Age of Discovery and colonialism. And it brought with it a graphical presentation that is simply and completely unmatched.

For puzzle gamers, it was time to put your hands over your hearts, as the Myst series drew to a close. Myst V was the last game in that series that Cyan will ever create. Supposedly the developers are all huddled and working on a super-secret project, so perhaps 2006 will see the dawn of something completely new. But that series will certainly be Myst.

Ok, on the bad side. There were quite a few games that probably should not have seen the light of day.

Lets start with my personal non-favorite, Dungeon Lords. It did something that no other RPG has ever accomplished: It made me hate an RPG so much that I stopped playing it. The graphics looked like they were from five years ago. The plot was difficult to understand. And grand buildings like castles and even museums were nothing more than cold, empty shells once you got inside. Supposedly there are patches now (very large ones) that fix a lot of the problems, but I am too wary to give it another try.

The biggest disappointment game-wise in terms of a group of titles was the PSP. With bad titles like Dead To Rights: Reckoning and several lukewarm ones like Coded Arms, the PSP is still searching for its "killer app." Sony has even founded its own development house to try and crank out games for the platform, but nothing truly great has emerged just yet.

On the PS2, Beatdown: Fists of Vengeance proved that sometimes you can't cross two genres and come out with a third. Combining an RPG and a karate-street-fighter game sounds good, but the resulting product had none of the coolness of either field. I guess even with good parents kids can sometimes turn out bad.

In the massively multiplayer genre, RYL (formerly Risk Your Life) came out of the gate with a million dollar top prize for gamers willing to PvP and murder their way to the top. Unfortunately, the prize turned out to be more of a gimmick to get people to play what is at best, an average MMORPG. Someone will win it. And after playing for a year in RYL, they probably deserve it.

There were others. Red Ninja is probably the most tragic. Blessed with an amazing story and some unique weaponry, the game even had hot Asian babes posing with the Red Ninja race car as part of the promotion. But it all fell apart because terrible camera angles made the game mostly unplayable, since you can't hit people if all you are doing is looking down at your feet during the big fight. Save for a few lines of code directing the camera's AI, the game might have been a huge success.

All in all, I am extremely happy at how the year turned out, and I hope you were too. Even the bad titles were interesting, and I am looking forward to seeing what 2006 will hold.

Happy New Year everybody! And Good Gaming to all!