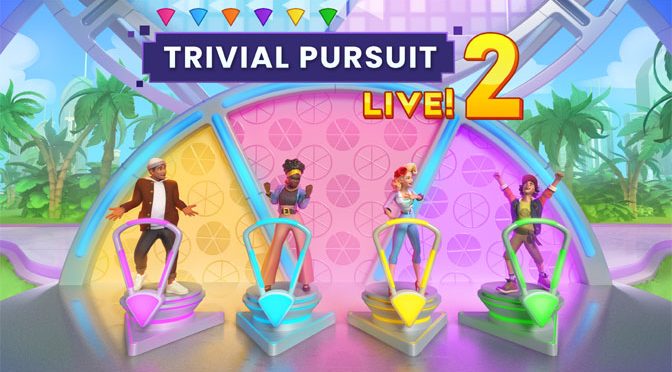 Trivial Pursuit Live 2 is a sequel to the original Trivial Pursuit Live game released several years ago. For the most part, the new game plays the exact same way as before, although it has been upgraded with new questions, better performance and a Twitch mode for streamers where only one copy of the game is necessary in order to launch the multiplayer fun. 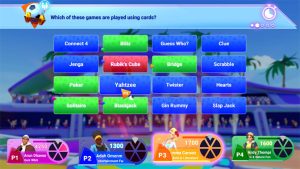 Obviously, the Trivial Pursuit video game is based on the classic board game of the same name published by Hasbro. In the board game you answer questions, move around a circular playfield, and try to be the first person to collect the six pie wedges needed to totally fill up your colorful game piece. The video game takes those same general rules and puts them into a more modern, fast-paced environment that resembles a television game show.

In fact, Ubisoft has taken the game show concept to the next level. There is no plot for the game, but there is a sort of subtext. For example, you are playing inside a massive trivia stadium surrounded by adoring fans. There is also an announcer who seems to be excitedly providing color commentary as much for an audience as for the players. So, I suppose that this is a world where trivia masterminds could compete for popularity with professional sports teams. That would actually be pretty cool.

There are several modes available for gameplay, including a couple that were not in the original title released several years ago. The most party-friendly mode involves using multiple controllers, with players competing on some questions to get to the best answer faster than their competitors. Artificial intelligence-based characters fill in the empty player slots, so you will always have a full game. And you can set the skill level of those computer-controlled players (which basically changes their accuracy) so you can play a game at the difficulty level you enjoy. 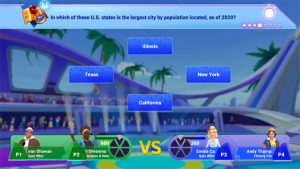 There is also a really great version of the game called Family Mode where children and parents can play together. In Family mode, adults are first given a standard Trivial Pursuit type question to try and answer, and then children players are provided with a different, easier question. That way, everyone can play together regardless of their overall age or skill level. It works well, although sometimes the ease or difficulty of the questions can be a little bit subjective.

You can also play online against other people if you want to expand a trivia party beyond your living room. In the online mode, players from around the world take on empty game slots. This is not unlike other Ubisoft games like Jeopardy or Wheel of Fortune, which we reviewed back in 2018. The matchmaking engine seems to have improved somewhat since then, but catching a full game of Trivial Pursuit Live 2 can still be pretty hit or miss. I have gotten pulled into a game almost right away, but also waited for a long time without finding any other players, even when hosting a game. There is no lobby, and no way of knowing how many players are waiting to play. So you just have to launch that mode and hope for the best. 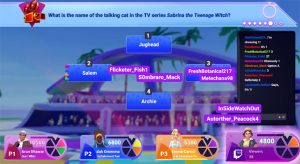 There is also a new Twitch Mode which should make streamers very happy. It uses the Twitch Chat voting system, meaning many people can play a hosted game and see their answer choices on the main screen. And you can do that with just a single copy of the game. Those who host Twitch feeds can have a lot of fun with that mode. And if your favorite streamer is playing, you can easily jump in and play along.

Like with the other gameshow-type titles in this series, you have a series of icons to choose to represent your character. They are a diverse group with just about everyone represented, which is nice. And because Trivial Pursuit Live 2 is not based on a real gameshow, players don’t have to worry about looking respectable. As such, the game icons have a lot of silly unlockable outfits. You can dress them up as anything from mimes to wizards, or Sherlock Holmes and Indiana Jones lookalikes. As you play you will unlock more costumes and titles to adorn your favorite avatars. 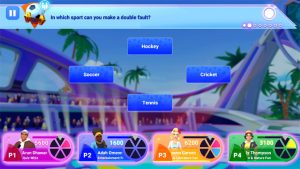 I mentioned at the start of this feature that Trivial Pursuit Live 2 does not play exactly like the board game that it’s based on. I would be fine if it did, but that could make for a very long game. Instead, the video game takes the same basic goal of having to earn six pie pieces and uses that as a front to a series of trivia mini games. Some modes have players simply picking a correct answer from among four choices, with everyone playing and providing an answer. Other modes are more competitive, with players racing to choose the best answer on a big board with lots of correct choices and quite a few decoys. This keeps the gameplay exciting.

In the end, games always finish with a final sudden death mode where you have to answer a series of five questions based on single subjects. You get two choices, so if you don’t know an answer, you can guess. But if you pick wrong, you are out of the running for the rest of that five-question series. The last person or people still standing get a wedge. Then competition moves to the next set of questions for another wedge. The winner of the overall game is whoever wins six wedges first, regardless of their overall score. 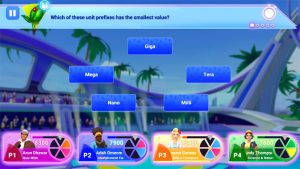 I have a little bit of mixed feelings about the ending section of the game. Because I am pretty good at trivia, I almost always have three or four wedges at that point (and normally, so do the people I play with). So, for us, the game pretty much always comes down to that last mode, which almost makes it seem like the rest of the game did not really matter. The game even caps your ability to earn more wedges in the early rounds at some point, so you can’t have more than four wedges going into the final round. I realize there is a need to truncate the video game so that it does not go as long as the board game, but at least in local party mode, I do wish there was a way to just keep playing normally until someone earns enough points to win the game without the sudden death mode. That would be more like the board game, and I bet a lot of Trivial Pursuit players would enjoy a longer-form game without forcing the ending. 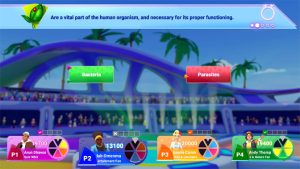 There are more than enough questions in the game to keep it from getting repetitive. My testing group played Trivial Pursuit Live 2 almost 100 times and only ran into repeat questions once or twice. The game keeps updating itself from time to time on the PlayStation platform, so it’s possible that new questions are being added. The game also fully ties into Ubisoft’s Connect service too, so there are weekly and community challenges to complete to earn rewards, just like with other games from Ubisoft like Assassin’s Creed Valhalla or Far Cry 6.

If your trigger finger is getting a little tired and you want to exercise your brain instead, then Trivial Pursuit Live 2 is an exciting way to do just that. Earn those pie pieces, impress your friends, and expand your knowledge of the world, all from the comfort of your couch.