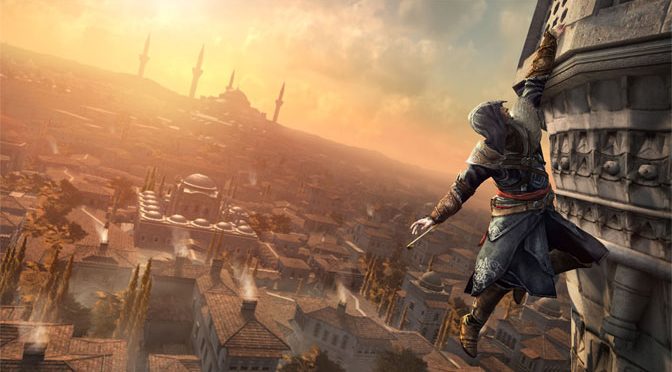 This may seem surprising that I am reviewing this game as I have a long history of not liking the early days of this series. Maybe this was a way for the chief editor to try and change my opinion on the series. When I played these games originally, I found them to be repetitive and a real snoozefest, but it has been years since I have played one so let’s see what’s in store for me.

It was still a bland slog, end of review.

Correction: I have been told by the Chief Editor that I need to give a full review, so I will explain why I think the early Assassin’s Creed games were basically weaponized boredom. (And why this new port may not be that bad actually.) 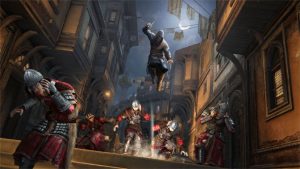 On the positive side, this is a pretty complete pack of games. It includes the full single-player campaigns and all solo DLC from three games in the series. They include games featuring Ezio Auditore da Firenze, including Assassin’s Creed II, Assassin’s Creed Brotherhood and Assassin’s Creed Revelations, as well as two short films. The games are selling individually for $19.95 on Steam, so to get all three in this pack for about $40 is not a bad deal. And moving them to the Switch has upgraded them too, with better graphics and features like HD Rumble.

If you are going to jump into the first game in the series, Assassin’s Creed II, you should at least have a passing idea of what is happening in the story. Readers, I don’t know when the last time you played an older Assassin’s Creed, but the story is safely in the genre of science-fiction stupid. They wanted Desmond to relive his ancestors’ memories because they would activate part of his DNA and allow him to learn the abilities of his ancestors. 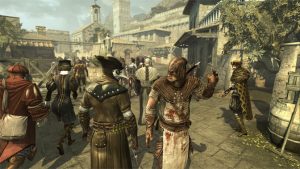 I want to first point out the fact that athletic abilities and learned skills are not “locked away” in your DNA. “But, Neal” says the strawman of an average reader “the story is just a vehicle to the gameplay and you are supposed to suspend disbelief.” Granted, but the plot has to meet us half-way and at every turn the story takes a bobsled into the loony valley. Additionally, there are these “truth” pickups where it talks about conspiracies and secret coded messages in historic paintings. Considering recent current events, it honestly worried me that the game might inspire some people to think this was science-fact.

Now, while I did not care for the gameplay all that much in general, it was the basis for a lot of games that followed it. Yes, Ubisoft was able to turn the series around. The latest title, Assassin’s Creed Valhalla, is amazing, popular and keeps expanding with new DLCs. It earned 4.5 GiN Gems out of 5 in our review. Both other modern titles, Odyssey and Origins also got high marks in GiN reviews. 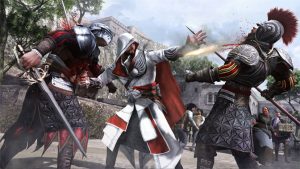 And while the gameplay in these titles are not up to that level, I feel they need to be respected for what I call an “elder game.” An elder game is a game whose mechanics have set the ground for numerous titles and have improved. In this case, the counter combat is still clean and easy to learn once I got the Switch controls figured out. That said, the game itself was at its worst when it was being an Assassin’s Creed game. The assassinations were long, boring slogs and the only reward for moving the story along was access to better items and more areas.

Sure, there are other side tasks to do like the city manager and collectable hunting. These make the game enjoyable, except that some of the collectables lose their incentive on the Switch because Nintendo does not do an incentive such as an achievement or a trophy. However, this reinforces the fact that the best part of Assassin’s Creed games is when you are not playing Assassin’s Creed. 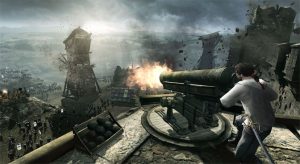 Before it gets brought up, this does not contradict my stance that Assassin’s Creed changing fixed the series. I would have rather they tried to keep the game unique, like they did with those aforementioned modern titles, instead of turning it into FarCry or some other series that was not as interesting.

I know this review was about Assassin’s Creed II, but this holds true for the other games. Sure, Brotherhood has a large amount of city renovating and other ventures that fans love. It still goes back to the fact that a lot of people love the older Assassin’s Creed games, except the actual main parts of the game. 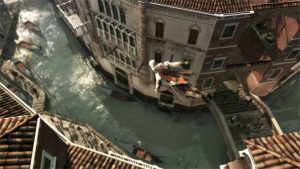 As for the port itself, it was stable on the Switch. I had a couple crashes, but nothing too drastic and the autosave worked to ensure that I didn’t lose much of anything when that happened. The sound seems to have gotten an upgrade too, which was nice. In terms of porting older games over to a more modern platform, The Ezio Collection did a fine job. 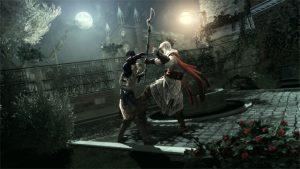 The bottom line is that if you are a fan of the classic series of games, then grabbing this collection for the Nintendo Switch for just about $35 to $40 is a good value that will let you play them on a new platform alongside all of the more modern titles also present there. It’s also a nice way to see where games came from, because not only are the core Assassin’s Creed games the basis for the constantly improving series itself, but also for a lot of other titles as well.