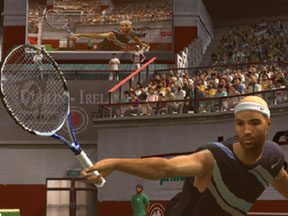 The original Top Spin arrived for the Xbox and proved itself to be a fine alternative to the Virtua Tennis series. The same could be said about its 360 sequel. However, there were always those who complained that both Top Spin and Virtua Tennis were nothing more than modernized versions of Pong featuring real players.

2K Sports and PAM Development sought to change that. By altering the control scheme, Top Spin 3 breaks away from the simplistic arcade gameplay of the past in favor of a more sim-like approach. Is it for everyone? Surely not. Those who prefer the classic gameplay might want to stick with VT, but for someone who is up to a new challenge, favors a more sim like taste in their tennis, and has a LOT of patience, they will find that the rewards of Top Spin 3 are well worth it.

First time players will definitely want to spend time in the Top Spin School. Here you will learn all the aspects of the game right from the basic serve (which I admit I fumbled many times during gameplay) all the way to those high risk shots that separate Roger Federer from the Bobby Riggs.

Even making a simple return shot takes timing and precision, as even the slightest mistake will result in an errant shot and an "out" call. Players must take into consideration their foot placement, return location, and timing of their shot to be a winner. It’s a very challenging experience but when successful the rewards are vast.

Many of the current tennis superstars are present this time around, including Roger Federer, Andy Roddick, Mario Ancic, Justine Henin, Amelie Mauresmo and Maria Sharapova. The PlayStation 3 version also includes 2008 Wimbledon champion Rafael Nadal as an exclusive character, and thankfully the over hyped Williams sisters are nowhere to be found. Unfortunately the same is said for Elena Dementieva.

Also for the first time in the series we have memorable players from the past including Bjorn Borg, Boris Becker and Monica Seles.

Included in the forty venues are the US and Australian Opens but to my surprise there is no Wimbledon! The closest likeness is in Ireland but still I wanted to perfectly recreate the eight hour marathon between Federer and Nadal. Hopefully 2K will be able to license Wimbledon for Top Spin 4. We’ll just have to see.

Nonetheless all the venues and players look realistic. There were times I couldn’t tell if I was watching a match or playing it on my PS3. That was until I saw the crowd, who I admit is nowhere near as lifelike as the rest of the product.

The same can be said for the overall sound package. It’s mostly dry and much to my surprise the grunts and screams that I expected from some of the players (particularly Sharapova and Nadal) were not there. I have my own explanations as to why they weren’t present, but they are not for sensitive ears. Even the crowd doesn’t have any real excitement.

Yes I know tennis is meant to be played in a silent venue but even between serves and at the end of the match they sound more canned than normal. But still, this doesn’t affect a good package.

Again I should mention that Top Spin 3 is not for everyone. This is a tennis game that takes a LOT of practice to be good at, kind of like the sport in real life. If you can’t deal with patience, go back to Virtua Tennis 3.

Many people will likely get frustrated easily with Top Spin 3, especially if they are expecting a more Virtua Tennis experience. I admit I did at first, but over time I persevered and found a very deep package where the work is more than worth the rewards. And thankfully, that results in something original. I have to commend both 2K and PAM for such a bold move in the sports game arena. This is no cookie cutter title by any stretch of the imagination.

Cons: Only good for those who have a LOT of patience. Anyone else would be frustrated easily. Sound is weak (Sharapova doesn’t yell out like she does for real.) Crowds are uninspired. Where is Elena Dementieva? And while we’re on the subject of Nadal, why is there no Wimbledon venue!?!