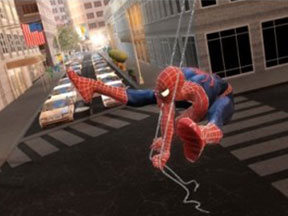 I am not a true fan as I did not go to the midnight opening. I went at 8pm the next day with a couple friends, and I liked the movie. I did not like it as much as I liked the first one, but I liked it better then the 2nd one. If they had left out all the singing and dancing, and had not done some other stupid things, I would have liked it better. But enough on the movie review. We are here to talk about the game. Sadly, my feelings about the game are similar. I liked it better then the second one, but that is not saying much.

For those of you who have not seen the movie, this is the one where Spiderman (Peter Parker) gets bonded with a symbiote that turns the spidey suit black and changes Peter from a nice happy go lucky hero to a real bastard. Only the ringing of a bell allows Peter to take off the suit, though it goes to someone else who becomes Venom.

The game opens with a great tutorial on all things Spiderman from web slinging and wall crawling to fighting (attack and counter attack) and time slowing Spidey reflexes. Oh and lest I forget, the spidey senses which when activated turn the world into black and white and allows you to spot the bad guys who now show up as red, along with the good guys in green and your objectives which you may or may not have spotted before are now an easy to find yellow, is also demonstrated. I don’t mean to trivialize the training. It is in fact really helpful. Once you have beaten up the bad guys and saved some folks from the fire, you are let loose on the mean streets of New York.

At this point I was totally in love with this game; I went wild swinging through the city. Occasionally I would stop and land on roof tops to just take in the huge and totally open city. After exploring for a bit I swung by and picked up MJ and took her for a swing. She would call out that she wanted to go higher so I took her higher and she displayed her affection for me by gushing with hearts, and then she wanted to go lower to the ground so I took her there and again she gushed hearts of love towards me, and just in the nick of time I got her to her destination.

While it was fun, once I was done I kept thinking back to some movie where the guy is sitting there driving and the hot girl is setting next to him shouting "take me faster, I want to go faster." She was totally coming on to him so that she can get what she wants. Probably not what the game developers where going for, but it is how I felt. Besides the MJ challenges, there are other challenges in the city, but I will let you find out more about those as you play.

After swinging around some more I ended up at a dock by the river and these bad guys where holding this guy out over the river on a crane. Being a super hero, I could not resist saving him and beating the snot out of them. That completed, I felt like taking on the local gang, so I headed down into the subway tunnels. The world (city) map is divided into zones. And one of the things you can do is try and clean up the different areas of the city by taking on the three gangs.

Personally this is the most enjoyable aspect of the game, though it can get to be a bit much as the game progresses. Beyond the gangs you also have random crimes, and if you are lucky enough you can literally follow the police cars to the scene of the disturbance. Besides the challenges and the gang stuff and the random events, there are tokens you can find including: 75 gang tokens, 35 secret tokens, 30 subway tokens and 30 skyscraper tokens. If all of that original content where not enough, there are also 42 missions that draw from the content of the movie and the comics.

The controls are fairly easy to master. You navigate thought the city using the analog stick and shooting new webs ahead of you. Quick to learn and master, until your first time trial and then you really learn how well you have mastered or in my case not mastered as quickly as I thought, how to get around the city. Fighting is easy in concept. There are a lot of combos, special moves and counter attacks, which basically amounts to waiting for something to happen and then counterattacking by hitting the right button at the right time when prompted. As you progress through the game (i.e. finish missions) you will get rewarded with upgrades to your health and reflexes.

The down side of Spiderman 3 is the repetitive missions and the huge boss battles which takes forever. For me the boss battles were a lot of running around (and I mean a lot) trying to get everything right so you could get one or maybe two punches in before you had to back off or get walloped, or running around waiting to get prompted so you could do a super mega special attack.

Visually Spiderman 3 is really cool, as I have said I loved swinging through the city. I read somewhere that the city is 2.5 times bigger than in Spidey 2, which it really does feel like. I certainly can’t complain when you can move around the city and run through subway tunnels, all without any load times.

However the game also flounders when it comes to the details, especially when you are down at street level mixing in with the crowds of people and you see the same thing again and again among other issues including trees that you can see but otherwise do not exist and buildings without anything inside.

Overall this is a game with a great start and lots of potential that has great graphics until you dig too deeply. There are easy to use controls, but it does become a button masher in the long run.

Basically it comes down to this. If you liked Spidey 2 then you are going to really like Spider-Man 3. If you generally like movie themed games then you might want to pick this up. Otherwise wait until the price drops.