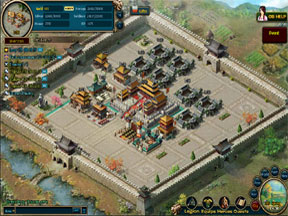 I love strategy games. In fact, I tend to get a hankering to play them at odd times, but can’t really indulge that urge whenever I want. When at school or work, you can’t really sit down and start playing StarCraft II or Civilization V. So how is a strategy gamer supposed to get their fix? For me, WarFlow fits that bill.

WarFlow is mostly a turn-based game, though there are a few times when it becomes more real-time like. The entire game can be played in a browser on either a PC or a Mac, or any device that supports Flash. In fact, the entire game is written in Flash, so there is a very low footprint that only loads briefly when you start it up. There is nothing to install, and nothing that stays behind on your computer when you’re finished your session. And it’s a persistent world, so you really feel like you are building something that stands the test of time.

In terms of value, WarFlow is free to play, so that’s pretty darn good. It’s one of those games where if you are impatient, you can pay what equates to real money to complete tasks more quickly. But I had a great time and didn’t need to spend any money to do it, though I have to say, that it’s pretty tempting because the game is a lot of fun and the publishers seem to really appreciate it when you do spend cash, because they give you a lot of extra in-game rewards for doing just that.

You just need to head to WarFlow.com to get things started. From there you can select a server to play on. I started out playing on server number nine, and could tell when it started to get a little crowded. Suddenly, two new servers opened up, so publisher Dovogame does a good job with load balancing.

WarFlow is set in the tumultuous times of ancient China, when various dynasties and warlords fought to unite and control the country. Eventually you will find yourself participating in battles alongside (and sometimes against) your countrymen, but when you start out you are simply a little warlord in a big sea. Thankfully, you are protected from attacks from anyone else until you learn the ropes. Every ten levels or so you are asked to move your capital city to a new zone within China, and each zone offers new rewards and challenges. For example, you won’t have to worry about player vs. player fighting until you hit level 21.

The brilliant thing about WarFlow is that you can play a little or a lot. I know people who only check in and give orders over their lunch breaks, and they have just as much fun as I do even though I put more time into playing.

Your main focus is improving your city. This is done by telling the builders what they should improve. Do you improve your housing to gain a greater tax revenue, or your training camp so you can improve your army, or your town hall to unlock higher level buildings from everything else?

When you give your builders a command, they set to work doing tasks. How long it will take is shown via a countdown timer. Generally, the higher level building you need them to create or improve, the longer it will take. At first, it may only take a few minutes to improve a structure, but high level buildings can take hours to complete. So it’s quite likely that you can give a command, say while you are eating your lunch, and then check back in once everything is complete later that day.

While your workers are busy constructing things, there are other things to do. You will need to raise an army and conquer the world. At first your army consists of one group of soldiers of a type you choose. But as you win more territory, you can hire more heroes and thus expand your army, since armies are attached to heroes. You are limited by your level as to how many heroes you can command, but are free to fill out your army within that restriction however you like. Some of the best strategies for building a great army involve combined arms and diverse skills.

Eventually you will stop building and start fighting. This is the heart of the game. There are a few main kinds of battle. The first will be against computer controlled opponents. Battles are straight forward. You simply watch your army line up and fight the enemy. This is done according to a set of rules about who fires at whom. Once the battle actually begins, you can’t influence the results. But if you see that you lost because the enemy loaded up his left flank against your weaker support troops, you can change your formation and try again. Eventually you will need to farm grain to replace troops lost in battle, but while you are still learning, all the deaths are more or less free and completely replaced. And coming up with a good strategy is a must. I like to put my armies with shields up front, and archers or crossbowmen behind them. I keep by cavalry on the flanks. It works for the most part, but I have to change it up from time to time depending on the enemy being faced. Troops have special abilities too, which come in handy depending on who you are fighting.

You are given a very nice graphical look at battles. These graphics strike a balance between bandwidth, the capabilities of the Flash interface, and eye candy. You will be able to easily tell the difference between your armies and can see what strategy the enemy is using. While not eye-popping, there are a few nice visual effects, so its perfect for a strategy game. There is no sound, but this is not a bad thing. I think this was done so the game could be played anywhere, and really, adding some cheesy music would not improve the strategy interface.

Once you become powerful enough, you will be able to fight group battles, where multiple players come together to attack an enemy army. These are fought using the same battlefield rules, but on a much grander scale.

Finally you will be able to attack other players. If you attack someone in your own nation and defeat them, you can become their lord, and get a tribute of silver from them. And if you get beat, you might become their dependent and have to tribute silver back to them. If you battle and win against someone from another nation, you earn rank points, which is used to determine your overall level of prestige and power within your nation.

There is one other special kind of battle that is unique to the WarFlow game, and that is the Mine War. During a mine war, everyone from the three different nations gathers on a strategic map to try and conquer a field of mines. You get a lot of rank points for taking over the mine of another country, and if you can find a quiet spot, you can mine while the battle is going on and rake in a huge pile of silver very quickly. As a twist, when two of the three nations starts to lose, they are combined into a new team against the country that is dominating, which makes the war go on even longer. Mine Wars activate every few days when the game clock strikes 16:00 in the summer season and runs for one hour. Once you see how much silver you can earn, you will be camping out waiting for the war to start. I think Mine Wars was one of the most enjoyable events in the game for me, and takes WarFlow from a turn based strategy game to something more akin to a massive real-time battle with hundreds of participants.

One thing to note is that there are two kinds of money in the game. Silver is used for just about every common task, like improving buildings or buying new gear. You can earn silver for completing quests, taxing your citizens, selling grain you harvest and as rewards for certain tasks. The other currency is gold. Gold is what you use to advance tasks if you don’t want to wait for them to complete. And although it’s possible to earn gold based on random events, for the most part, you get gold by spending real money to turn it into gold. Ten dollars in real money gets you 200 gold coins, which is quite a lot actually. It only takes one or two gold coins to advance most tasks. And when you spend real money, your VIP level increases, which gives you a few new options like the ability to tell your heroes to train for the next 24 hours.

Given that the game is free, I have no problem spending some money on it. WarFlow is highly addictive, and is just as good as most games you will buy at the store. If you find that you really like it, do yourself a favor and spend a few dollars on it to get some VIP rewards as well as extra gold. I played up to level 20 without having to spend any money. At that point, I wanted to spend a few dollars to achieve VIP status and support the game I had grown to really enjoy.

In fact, WarFlow is the best browser-based game I’ve ever played, and that goes doubly so for browser-based strategy titles. It’s the perfect mix of thinking and action, has a robust community (with both good and bad people), runs well on almost any system, and has that "just one more turn before bed" factor where its morning before you know it.

And if you happen to play on server number nine, come join the MudBlood Legion. We’d love to have you along.

Warflow earns 4 Â½ GiN Gems for being an addictive and fun thrill ride that starts strong and never, ever ends.