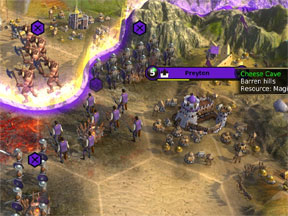 Warlock: Master of the Arcane

Many strategy games make the mistake of trying to do ‘too much’ in the name of immersion. We all want to be empire builders or conquerors, but not all of us enjoy managing all of the minor details involved with such responsibilities.

Warlock brings a fresh breath of simplicity to a genre overflowing with the opposite. At first glance, Warlock appears to be a fantasy version of Civilization 5, with its turn-based strategy and hexagon-based map. In reality, it’s so much more’or more appropriately, so much less. In this case, less is a good thing.

You will not find yourself spending eons of time in a single turn of gameplay. Once you develop your rhythm, the mundane tasks become second nature and you can focus on reducing your enemies to dust.

Warlock takes place in the fantasy world of Ardania. You start off by choosing your spell-casting ruler, his/her perks and spells, and your primary faction’s race: Humans, Monsters, or Undead. Once you’ve tweaked the map settings to your liking, you’ll find yourself in a world crawling with monsters.

Scouting is essential in keeping your early troops alive and expanding your kingdom. You will find resource nodes across the map which is where you will want to build your cities. The basic concepts of city building and resource gathering are simplified as to not be overly time consuming. You’ll be able to focus on developing your magic, expanding your armies, and of course, crushing your foes.

While the gameplay itself is fairly simple, the tutorial and manual do not make things easy. I spent most of my early games learning by trial and error. There are no in-game research trees, so you will spend time discovering what you need to do in order to upgrade cities and units. The user interface itself is fairly well done, but it could use some polish. It would be nice to have an ’empire overview’ that shows you the current state of all of your cities and troops.

Once you develop an understanding of how everything works, you’ll find that the turns move quite smoothly. You receive notifications on items that need your attention: Enemies near a city, completed spell research, demands from other rulers, and so forth. The rest of your time will be spent handling your troops, casting spells, and generally doing your best to conquer the world.

Warlock allows several paths for victory: Destroying all other rulers, casting the Spell of Unity, conquering all Holy Sites, or defeating the avatar of a god. I’ve only experience the first two conditions so far.

While the AI can be challenging at first, once you learn how it ‘thinks,’ you’ll find it lacking in certain areas. The opposing rulers will give you a tough fight once you start encroaching on their territory, but they are simply pathetic at offense. You’ll find them repeating the same failed actions over and over again, making your defense a cakewalk.

However, you can find yourself in a lot of trouble late game when you have multiple AI opponents. While they will fight each other, they love to pick on you when it comes to using Counterspell, a spell that disrupts whatever spell another ruler is casting. If you’re at war with three or more opposing AI’s, don’t expect to cast anything that takes more than one turn late game. The AI also has a problem with resistances. You’ll find them attacking units that have complete immunity to the attach type being used. Finally, don’t expect the AI to stand in each other’s way when it comes to the Spell of Unity. It’s quite annoying when five of them decide to cast it.

The units in the game are varied and full of flavor. You’ll find the standard fantasy fare: Elf Archers, Human Warriors, Skeletons, and Goblins. You’ll also find some strange units, such as Stubborn Knights (knights who ride donkeys into battle). The three factions seem fairly well balanced against each other, each having their own strengths and weaknesses. Despite the balance, each faction plays and feels quite different.

The graphics in Warlock are nice, but really nothing special. The units themselves look good, but don’t always mesh well with the terrain they are standing on. The sound is hit or miss. A lot of sound effects are reused, so some units sound exactly like others. While not a big deal, it is strange to hear your god’s ultimate unit screaming like a girl when they charge in to battle. Some of the unit sounds are quite entertaining, such as the stubborn knights, but others are just annoying (I’m looking at you, Elves).

Diplomacy is actually a glorified trading system. While I don’t expect much from diplomacy in a strategy game, the lack of options here was surprising. I occasionally use diplomacy for trading gold/mana, but it’s ignored most of the time. It’s somewhat useful late game to ‘buy’ Peace with the AI so you can cast spells.

Warlock brings nice, fast-paced gameplay to a traditionally ‘slow’ genre. While this simplicity comes at a price, Warlock still manages to deliver enjoyable matches. You can finish a game (or several) in the span of one evening, something that cannot be said for most other strategy games. Despite the flaws and lack of polish in a few areas (manual, in game tech tree, etc.), the game is just plain fun. You dive immediately into combat, which is Warlock’s best feature.

While I can’t say if this is a strategy game for the long haul, it definitely falls into the cool ‘game of the moment’ category.