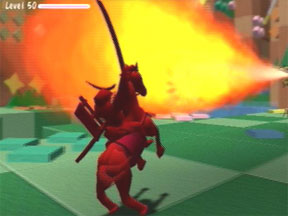 It is not too often that we come across a game that is actually innovative. And that goes double for titles that are rated E for Everyone. Normally they are either dull classroom type titles or just straight games with simplistic and uninspiring game play.

Graffiti Kingdom sounds a little bit like it would be about teens going out and tagging buildings, like a mod for GTA: San Andreas or something. But in fact, the Graffiti Kingdom is a place where everything seems to be made out of paper. So logically, those that can draw in a world like that would have a lot of power in an almost god-like way.

You start the game off as the hapless Prince Pixel. He unfortunately has to be up there near the top of the list as one of the most annoying and pitifully stupid video game characters ever created. And he has a very high-pitched and winy voice that not only makes him sound like a girl, but makes him even more annoying to boot.

Thankfully, you won’t have to put up with him for too long, because you quickly learn how to capture the form of almost any creature you meet in the game. Instead of killing them, you can capture their form. This puts them into your sketch book, which can hold only a limited number of creatures, and you can turn into that creature later.

Now that is pretty cool, but the real strength is that you can design your own character from scratch. You start with a blank canvas that looks a bit like an etch-a-sketch. You control a pen with your controller’s joystick and can speed it up for something quick, or slow it down for detail work.

You have to remember that you are working with a 3D canvas. Once you have completed your shape, say a leg you want to use, then the console will give you six choices as to the exact shape in 3D. Pick the one you want, or try again.

You can also rotate your creature to look at it from any angle. I forgot this when I was just starting out and ended up with a really pathetic two-legged turtle that was not fit for combat. You also have to pay a lot of attention to the direction that you want your creature to travel.

I forgot about this and one of my greatest drawings, a nifty black and red dragon, ended up programmed to run backwards. It was not quite so formidable when charging ahead tail first.

Another tester made this same mistake when creating a spider-like creature. It ended up running sideways. Thankfully, he was able to turn his creation into a crab that proved quite effective.

Once you have the basic design of your creature finished, you can move on to giving it various attacks. This is actually rather easy and fun. You can draw almost anything in your creature’s hand and call it a weapon. Give them a bat, a sword or even a cereal box and they can swing it at bad guys.

If you want to go bare-handed, that is ok too. You just have to remember that mass matters. A tiny little arm will be fast but do only a bit of damage. But a huge muscular arm that you have drawn very bulked up may hit a bit slower but will pack a punch.

The game really lets you be creative. Add wings and your creature will fly. You can even add ranged weapons like flaming breath, always handy in a world made out of cardboard and paper, or laser beams. Give them powerful legs and the ability to jump, which can be very functional just moving around the game world and also part of a very powerful attack.

In this manner, you can create some brawler type creatures for your arsenal, some ranged ones, some in-between ones and one or two that are just great a moving around the world. Since you can turn into any of your stable of creatures, having a good mix will let you conquer various different situations and bosses.

The graphics, like the game concept, are pretty unique. The intro looks more like a puppet show than the start of a modern console game, and we have to admit that is pretty darn cool. Within the world there are some nice touches like various stamps on some of the boxes that make up the world like "fragile" that remind you that it may just be a paper moon and muslin tree, but for the creatures like your character that live there, its more than make-believe.

The hardest part of the game is designing your own creature. Although you don’t have to make your own character, it is also the coolest part of the title. Without that aspect, the game would be just an average title. But the ability to make whatever animal, vegetable, mineral, robot or monster that you think can conquer the game world is truly awesome. And it’s also worth the many failures you will produce along the way.

Really young kids will probably get easily frustrated without an adult helping them along the way, though slightly older ones will probably be better creating their own cartoon denizen than their parents.