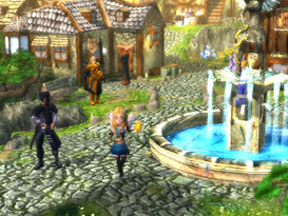 Grotesque Tactics: Evil Heroes is a strategy RPG that parodies the stereotypical fantasy world. The game will take a crack at whatever it can, from Lord of the Rings to Legend of Zelda and even itself. Remember though the game parodies so don’t take it too seriously. Otherwise the game will be completely lost on you as you get enraged over the sexist and racist stereotypes found all throughout the game.

Now that we have that out of the way let’s talk about the story of the game. You will play as Drake, a failed student of the military academy who wishes to take his own life by jumping into a ferocious mushrooms’ mouth. Before you can accomplish this though, a being from the heavens comes to stop you, he is Holy Avatar. Holy Avatar is a "semidivine" man whose main point in the game is to be the object of all of the maidens’ affection.

After convincing you to stay alive and fight against the Dark Church, who has destroyed the country’s army, you set off to collect anyone willing to fight. This includes scavenging the prisons for mass murderers and seducing maidens to fight with you.

The story is unique in the fact that you’re a bunch of villains or similar such and you are trying to save the country. It’s a nice little twist that I haven’t seen before and makes for a great story. Sadly this is where the greatness stops.

The gameplay has horrible shampoo syndrome. Run to this square, attack this enemy, rinse, wash, repeat. I know this is to be expected of a strategy RPG but the game goes as far as making you play some areas two or three times over again. Such as visiting the crystal caverns, which Drake comments "Isn’t this the cave of crystals?" and Holy Avatar replies "No, of course not." when it is in fact the exact same cave, already previously looted by you and everything. Sure you’ll smile at the game making fun of it and the genre, but that smile will quickly fade when you realize that the game really intends to make you grind through the exact same dungeon again.

Also the game has the "Obsession" meter. Which each character has their own obsession that will fill their meter when certain thing happen on the battle field. After the bar is filled the character will execute a special attack or ability. Cool, right? No, not cool at all. This is because the effects of the ability will hit everyone near them, even your allies. Let’s say that you leave a character standing next to Holy Avatar, after so long the maidens will get jealous and shoot the character standing next to Holy Avatar. This isn’t even a good twist to mix up the strategy RPG genre, it was just a stupid idea and sadly most characters Obsession work in the same way.

The graphics and art style in the game are heavily influenced by the eastern anime style found often in Japanese fantasy games. As being a parody game all of the characters are over exaggerated in this aspect, such as Drake being made fun of for his "Emo" look and the Holy Avatar wearing ridiculous sunglasses.

The audio in this game really needs some work. The music is bland and boring. The battle music in the game might as well be a lullaby to help put you to sleep as you tediously click around the map. Also the game lacks voice acting. Normally I wouldn’t care about this, but the dialog in this game is witty, funny, and just begging to be voiced.

My other major problem with the game is the amount of glitches. Even if the glitches are only small, this game is riddled with tons of them. For example, not being able to click an NPC to take a quest, so I ended up having to reload my game just to be able to take it.

I’ve also had this happen in battle, causing me to have to reload the game and lose twenty minutes of my life. Many of the glitches are similar to this. Though a couple of different times the game ended up shutting itself down. Needless to say these are complete mood killers. I found it hard to come back and play knowing that I might lose more time and still not get anywhere.

This game has potential, lots of it in fact. Sadly though, Grotesque Tactics: Evil Heroes never quite realized this potential. It’s about like picking up a piece of coal and saying "Someday you could be a diamond" and then throwing it into the furnace. The game just needed more time to refine itself, but instead it was slapped into the game market half finished.