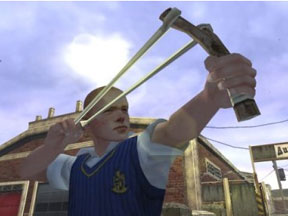 Despite Jack Thompson’s claims, Bully is not a violent game. It is, however, very funny.

Rockstar Games is the victim of bullying lately. Yes their games are pretty much over the top. Yes their games are very violent (especially after Manhunt and the GTA series,) but yes, they are also very fun and have a lot of stuff to do. Their latest game is simply called Bully, and it too has been the victim of bullying. Before even being released, it has been the victim of controversy, even to the point of a certain Miami lawyer calling the game a "Columbine simulator."

The truth is, of all the games that Rockstar has created, with the obvious exception of Table Tennis, Bully is by far the tamest game they have released. Does that make it a bad game? Not at all. In fact, not only is it fun to play, but it is also a very funny game.

All the tortures of your high school years return when you attend Bullworth Academy, one of the worst private educational institutions in the country. Delinquent Jimmy Hopkins, after constantly bickering with his mother and newly married stepfather, is abandoned in front of Bullworth and from there he realizes why the school gets its poor reputation.

After speaking with the school’s headmaster, Dr. CrabbleSmith, Jimmy meets up with another student, Gary. Gary is best described as a more vicious version of Steve Stifler from American Pie (without all the sex talk,) and he acts like the biggest bully around, always picking on a fellow classmate named Petey. Gary offers to show Jimmy the ropes in an attempt to take over the whole school.

Anyone familiar with the Grand Theft Auto series will feel quite at home with the controls and storyline flow of Bully. Just don’t expect the same over the top violence though, weapons here consist of typical schoolyard fare: slingshots, fireworks, marbles, stinkbombs, and itching powder. Enforcement officers are typical schoolyard fare as well, including prefects (hall monitors) and teachers. When Jimmy is able to explore outside of Bullworth, he will also have to deal with the police as well.

Of course, there is plenty to do around the Bullworth community, but keep in mind that Jimmy is in a private school, and as a result he must attend classes. Classes are minigames in themselves, and the subjects include art, English, auto shop, gym, chemistry, and photography. Art feels like a remake of the classic game Qix, and Chemistry is similar to the dance club missions of GTA: San Andreas. But the most variety occurs in gym class, which includes some favorites as wrestling and dodge ball.

When classes are over, there are many more missions around the school and community to get involved with, and they center on all the cliques that Bullworth is known for, including geeks, jocks, bullies, preppies, and greasers. Backing up one faction will easily affect the others, and I found myself helping the geeks out a bit too much.

The missions have their own unique personality as well. One of my personal favorites is the huge Halloween prank, where Jimmy, Gary, and Petey need to break into the school after the doors are closed and throw a bag of flaming dog crap into the teacher’s lounge. Not only is the mission fun to play, but the costumes are hilarious. Jimmy is disguised in one of the skeleton costumes the Cobra Kais in Karate Kid wore, Peter is dressed in the bunny costume from A Christmas Story, and Gary is actually dressed up as a Nazi SS officer!

The humor carries around well all around, especially in the voice acting. Despite not having any well known voice actors, the quality is top notch. Particular credit is to the actors who played Jimmy and Gary, as they stand out above everything else. Their comments already add to some very funny dialogue.

Even the original soundtrack by Shawn Lee has a flavor of its own.

Visually the world of Bullworth is impressive as well. The only catch is the frame rate does like to take a nose dive once in a while, but it is not too distracting.

In the end, Bully is quite a fun game to play, and is just hilarious to experience. In addition, that certain Miami based lawyer is the true bully, as he is attacking a game that is getting a notoriety that it does not deserve. Bully is good clean mindless schoolyard fun, nowhere near the Columbine status it has wrongly obtained.