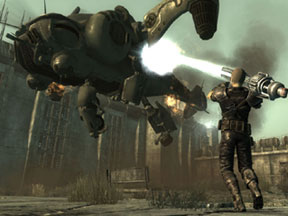 When I first started playing Fallout 3, I was blown away. It raised the bar on RPGs in the same way that Oblivion did before it. Everything about Fallout 3 is high quality, from the graphics to the various plots you weave your way through. It even picked up four GiN Game of the Year awards, so we are talking about a great title.

But there is always room for improvement. The one thing that did trouble me a bit about the game was that the ending felt a little rushed. I thought they could do a lot more with Liberty Prime, the giant robot, and perhaps even let you drive the thing or something like that. Walking behind the robot as it killed everyone in the last mission was a little bit of a snooze. And the final part of the game, where your character either dies or sends someone else to their death, was forced and quite unnatural. Bethesda has been dinged endlessly on the ending of the game, and for good reason. And I won’t even get into the fact that you die from radiation poison when there is a good chance that you are working with a radiation-proof companion at the time who could simply step in and turn the purifier on without any risk.

Then there is the whole "But I’m Dead" problem with the downloaded content [DLC]. If you’re dead, then it makes it kind of hard to play more missions in the wasteland. And restoring from a saved game just before you die is cumbersome and a little silly. You have to say, "Hey, I would love to run in there and die to end this game, but I’ve just reloaded and have to wander off to play Operation Anchorage or The Pitt first, but then I’ll be back."

Broken Steel fixes all these problems, and gives Fallout 3 the ending it really should have been given to start. Once Broken Steel is installed, you can play the ending of the core game like normal. This time around though, you can actually ask Fawkes to turn on the machine for you in the radiation area. Or you can do it yourself. Either way, you wake up inside the Brotherhood medical bay after the video montage plays. You have been in a coma for two weeks.

Unlike The Pitt or Operation Anchorage, Broken Steel is an actual extension of the game and not a side quest. The Enclave has been run out of the purifier, and clean water is starting to flow again in the wasteland, but even though you won a major battle, the war continues. The Brotherhood is rightly concerned that The Enclave may still try to raise a little heck in the wasteland, and asks you to help them win the war once and for all.

Besides the new main quest, the biggest plus to the Broken Steel pack is the raising of the level cap from 20 to 30. And yes, you get new perks each time you level. Some of the new perks are a little bit on the lame side, but a few are pretty good, and you can always increase the level of some of the existing perks if you want instead. By the time you hit 30, you are probably going to have 100 percent in every skill, so I doubt the level cap will go up anymore from this point on.

There are actually two main quests inside the Broken Steel pack. The main one has you going after The Enclave and assaulting some of their main bases that are still left in the wasteland. This is the main part of the DLC. But when you wake up, you are actually told about another series of quests out at the purifier.

I thought the purifier would simply fill up the wasteland with clean water, and eventually the whole place would turn green. And it might. But it’s going to take a while. In the meantime, The Brotherhood has organized a bunch of Brahmin convoys to fill up with clean water pumping out of the purifier and deliver it to settlements all across the wasteland. You will see them as far north as the Republic of Dave and of course at major places like Megaton and Rivet City. In fact, the Rivet City security force is tapped to escort the convoys, since a lot of the Brotherhood is still busy fighting The Enclave.

Needless to say, several somewhat funny things happen to the different convoy deliveries and you are tasked to make things run smoothly again. Most of these missions can be solved using violence or diplomacy, though I think the violent options are much more fun.

Back to the new main quest. The Brotherhood has it pretty easy at first because of Liberty Prime. Having a giant nuclear football throwing robot on your side always makes things easier. But The Enclave still has the technology edge, including their helicopters, better armor and more powerful plasma weapons. As it turns out, they also have access to the old military satellite network, complete with nuclear weapons platforms. Obviously, this is bad news. Your primary mission is to find a way to destroy The Enclave’s ability to launch new nukes.

Your mission will take you into the presidential metro, which is a pretty cool new underground area. It also expands the below ground area of everyone’s favorite Deathclaw-infested town, Old Onley. Both of these areas are fun to explore as part of your new main quest. Whereas Old Onley might be more traditional in nature, the Presidential Metro will put you in the middle of a war between robots and ghouls, which can be extremely challenging because of a new type of ghoul that seems to be very resistant to most damage. In a way, it’s kind of like a ghoul behemoth.

Eventually you will be given a new weapon called a Tesla Cannon. This is a single shot weapon that is extremely powerful, but with a very long reload time. Its best power is the ability to destroy an Enclave chopper in a single shot whether it’s on the ground or doing a strafing run against you. In the final mission of the DLC pack, you find yourself on an air force base filled with attacking Enclave choppers, so having the cannon is a good thing.

At the very end of the main DLC mission, you are treated to some real fireworks, which again, should have probably been the actual ending to Fallout 3 itself. But at least it’s here now, and boy is it fun to play.

There are also some new things you will notice in the wasteland. There are some new really tough monsters out there and quite a few new weapons as well. The biggest new normal weapon seems to be the tri-beam laser rifle, which shoots three beams at once and does massive damage, but also uses three charges with each shot. I prefer the Metal Blaster from The Pitt, especially at short to medium range. But the tri-beam is pretty good for longer range fire. You just have to take one from a dead super-mutant. There are other weapons out there to find as well, so keep some space in your arsenal.

And like The Pitt, when you are finished with the missions, you still have several collection quests that can be completed over time. Besides gathering stuff for The Brotherhood, you will now get credit for killing super mutants, kind of like if you took the Contract Killer or Lawgiver perks against good or bad humans. Simply bump a super mutant off and then get a blood sample. Drop that off with The Brotherhood for caps.

All in all, I would have given Broken Steel a great rating just for fixing the poor ending of the original game. But the ability to actually continue the main story is amazing, and much better than just doing side quests. You will actually feel like you are helping out the wasteland people, very much like in the main game. In that way, Broken Steel is pretty seamless.

Some people might balk at paying $10 to get content that should have been in the original game, but Fallout 3 gave us a complete story even if the ending was lame. Broken Steel is brand new content, and quite good, that happens to improve not only the ending, but also the overall quality of the original. I can’t think of a better DLC for any game. It’s worth every penny of the $10 it’s priced at. I’d almost say it was essential to the complete Fallout 3 experience, and I will definitely have it installed before I play through the game again with a new character.