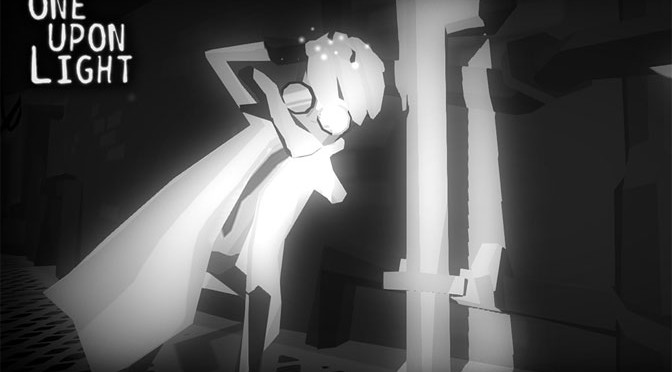 I like a good puzzle game and One Upon Light has a lot to offer. This top down, black and white, stylized puzzler is challenging both from the puzzle angle as well as certain parts that require timing more like a platformer. The puzzles get progressively more challenging as players try and move a scientist through a crumbling research lab. The scientist is suffering from deadly photophobia and collapses and dies when exposed to light, which makes moving from shadow to shadow the challenge.

One thing I really appreciate about this game is that if the scientist dies during a task, the player doesn’t have to repeat the entire level, just the failed task. This is important because some of the challenges are very difficult, especially if they require precise timing along with a complex puzzle.

Eventually players can move filing cabinets to create shadows and later copy shadows, but that’s the extent of skill advancement, which seems pretty limited for a console game.

One Upon Light does have a storyline, but it’s pretty threadbare. I kept expecting the story to get richer, but it doesn’t. After completing a level, players are rewarded with a newspaper with only the headline legible for a brief bit of information about the possible reasons behind the scientist’s plight. Sadly, these are the only rewards and after awhile, they just seem stingy.

Without a more detailed story, game play gets repetitive. It starts to feel more like a mobile app rather than a console game. After the first few levels I stopped playing more than one level at a sitting knowing that there wasn’t going to be a big reveal coming, which is too bad, because the framework of story that is there seems pretty interesting. There just isn’t enough of it. It’s like someone decided to write the whole game using Tweets.

Despite its drawbacks, One Upon Light does have nice graphics, good audio, and very challenging puzzles. If you’re the sort of gamer that likes mobile type games on a console, then this might be a good game for you. If you don’t care much for story and just like the puzzles, then this would be a good game for you. For me, it fell a little short, which was disappointing because it started out very promising.

One Upon Light earns 3.5 GiN Gems. Check it out and let me know what you think in the comments below.