Hey all I’m back with a game that shouldn’t be played alone. It’s Never Breakup!

Gameplay: The gameplay is okay, but it has some very imprecise controls and led to much frustration on my end. The basic premise is that you control two animals. If you play alone, they are connected by a rope. Your goal is to traverse levels, and reach the end through a series of platforming puzzles. 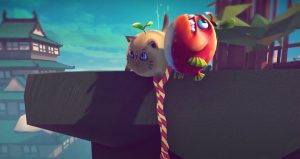 Frankly, Never Breakup frustrated me to no end, and I didn’t have the opportunity to get a second player to help me out, which could be a challenge in quarantine unless you are lucky enough (or unlucky enough as the case may be) to have a fellow gaming brother, sister, parent or significant other living in your home. Without that second human player, the imprecise nature of the controls led to me failing levels dozens of times.

Art: The art is okay, but this is very clearly an indie game and doesn’t really try and compete with AAA games. That is okay, but frankly along with the imprecise controls, the art didn’t impress me all that much. It also didn’t make me physically ill, so it doesn’t get a total failing mark from me.

Music: The music is barebones and utterly forgettable. I guess it’s there, which is a check for the music box.

Overall: This game shouldn’t be played alone. Get a friend or family member to play with you if at all possible. Never Breakup is not an amazing game, but it could be fun for two people if you are looking for something to do together with a $10 price tag.

Not for those who don’t like: Neither of the above.