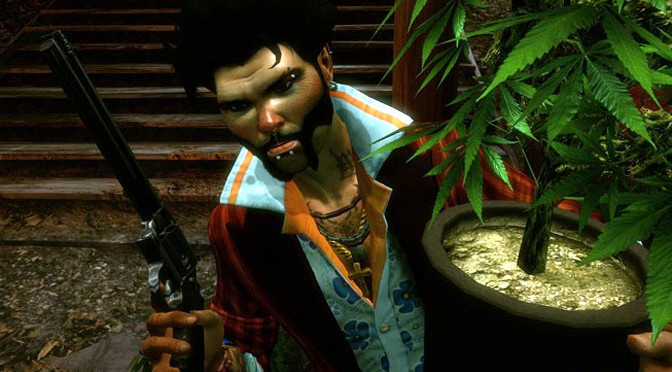 Rail Shooters are a dying genre in the age of open world, first person shooters that allow a player’s gameplay to determine the outcome of a story. That said, sometimes the revival of genres can be both nostalgic and an opportunity the move the game in a new direction. Blue Estate does that in some ways and dramatically fails in others.

In terms of story, this game could have been written twenty years ago. It’s rife with racial stereotypes, fat jokes and objectified women. Oh, except it’s supposed to be funny and sometimes it actually is. The opening is actually pretty funny. The line is that everyone in the game is horrible and they all belong in jail and that turns out to be true.

The game begins with the player as Tony Luciano, whose favorite stripper Cherry Popz has been stolen by a rival Asian gang. Tony is Italian mafia in a completely stereotypical way. The Asian gang is presumably Korean since their head guy is a caricature of Kim Jong-il, who likes to cross dress and wears a bra. When Tony eventually beats feat out of town, the player switches to playing as Clarence, a dishonorably discharged Navy Seal who is trying to get money together to save his mother. Blue Estate is actually a racehorse, who like Cherry, has been stolen. An Eastern European gang stole the expensive racehorse, like that matters. They are stereotypes like everyone else in this game.

Blue Estate does make good use of the PS4’s controller. The touch pad is integral to game play and the gyroscopic controls are part of the action. I had to keep zeroing the controls though to be able to hit my targets, which got annoying. The touch pad is used not only for opening doors and the like but also for running jokes in the game about Tony’s hair getting in his eyes or a Chihuahua humping Clarence’s leg. The player has to swipe the pad to clear these “obstacles.” It’s funny the first couple of times but it gets old quick, like most of the jokes in this game.

Other than the occasional funny moment, Blue Estate is a straight up, tendonitis inducing, rail shooter. It’s all about head shots and nut shots and your statistics at the end of the chapter. Now, I’m all about a game that gives me extra points for head shots and I don’t mind a high kill rate in a game, but Blue Estate gets tedious like most rail shooters, which is why the genre is dying in the first place. Even the boss battles at the end of chapters are just repetitive nonsense.

The story, such as it is, is a prequel to the comics of the same name. I haven’t read the comics, and based on the game, I’m not likely to read them. The problem with rail shooters is that they tell you the story in the beginning of a chapter, then you shoot a lot, then they wrap up the story at the end of the chapter. Game play has little to do with advancing the story and Blue Estate is no exception to that formula. The graphics are good, as is the audio, and the environments are surprisingly rich for a rail shooter.

In short, if you like rail-shooters and don’t mind lowbrow humor high on stereotypes, you’ll probably enjoy Blue Estate at least for one play through. I don’t see that it has a lot of replay value unless you are a player that has to have perfect stats for every chapter. Personally, I think the price point is a little high for what you get out of this game. Check it out for yourself and let me know what you think in the comments below.