In Carrion, I won’t say that you play the bad guy. You are the monster in the game for sure. But this could easily be a case of situational ethics. Afterall, in the beginning of the game you are confined in some type of scientific containment tube. How dare these foolish humans imprison a sentient being just because it’s different from them. Clearly they are an evil force in this universe that must be destroyed for the good of (not humanity, but whatever you are – monstermanity?), well anyway, destroyed for the good of every non-human species out there in the universe.

And when your confinement cage cracks open, that is exactly what you set out to do – in as bloody and violent a way as possible. 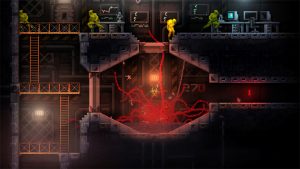 In Carrion, you play a fleshy red, gelatinous monster with lots of hungry mouths and sharp teeth. If this was Dungeons and Dragons, I would call the creature a Gibbering Mouther, at least in appearance. You move by spawning tentacles that can lash out and grab onto almost any surface, a useful form of locomotion that allows you to zoom straight up and down vertical shafts as well as quickly race across flat surfaces. You can also move underwater, and don’t appear to need to do things that handicap lessor beings, like breathing.

Controlling the monster is extremely easy, especially since you can pretty much go in any direction where there is a surface to grab onto. And because you are mostly gelatinous, you can also squeeze into small spaces and pipes to access areas that might otherwise seem unreachable. One of your first kills will probably involve a hapless human sitting alone in a bathroom stall using that technique. 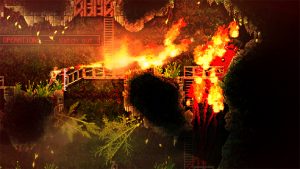 Of course, as a monster, you consume humans, which is done in a violent and somewhat grotesque way with blood and gore flying in all directions and them screaming in fear and pain until you rip through enough of their tasty flesh so that they finally shut up. But their death need not be for nothing, because you use their meat to add to your own size. This is kind of how you can tell how many hit points you have. If you are really huge, it means you ate a lot of grade A human munchies and are big and healthy. As you take damage, mostly because some pesky humans fight back with their guns, you will lose biomass. A tiny monster is a nearly dead monster, so if you end up small, you better find a snack before entering combat again. One of those nice, pacifist scientists will do nicely.

Don’t worry too much if you die. As long as you have found a breeding ground where you can leave some of your biomass behind for later (which also saves your game) then a new monster will spawn from there. There are multiple save points like that on most levels, and you need to find them to open up a portal to a new zone. But finding them is also good because it means not having to do a much over again if you die. 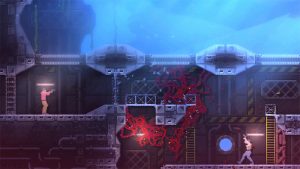 In addition to just pouncing on humans and chewing them to death, you also have several offensive weapons that you can earn as you play, as well as defensive powers. These are found in biohazard containers like the one where you started the game. Normally well-guarded or hidden, breaking into them will grant you a new offensive or defensive power. Some of the powers make you more effective in combat, like the ability to web up a human for later snacking, but most also factor into completing levels by giving you the ability to reach seemingly impossible places. Shooting your webs to flip a switch across the room would be one example using an early power.

You can also grab things with the tentacles that you spawn, and then toss that stuff at enemies to knock them down or outright kill them. That is a power that you have from the start, though you can improve it as you play. And don’t worry about object or environmental kills that you instigate, as you can still snack on dead humans. It’s just not as fun. 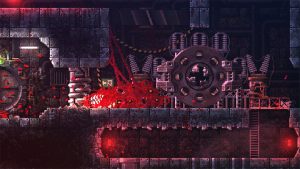 Even though the game has a lot of action, at its heart it plays like a puzzle game. Each room is kind of like a level in a puzzler. Normally you have transitory hazards like humans with weapons as well as objectives like flipping a switch sitting behind a security gate that must be met. How you approach the situation, sneaking around and getting kills from above or below, or going toe-to-toe with pissed-off space marines, is up to you. Just be careful because some of the humans, especially later in the game, are far from pushovers, so expect your food to fight back. And some puzzle rooms can’t be conquered at first. You need to go around and come in from another side, or pull some lever on the other side of the map to open a critical door. So thinking monsters will have a better time with Carrion. 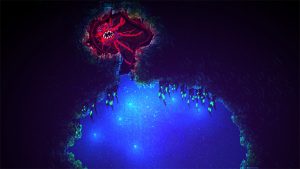 The biggest problem that I experienced with Carrion is actually the map design. The facility that you are invading, or escaping depending on how you look at it, does not make a lot of logical sense in terms of layout. It sprawls horizontally and vertically, and in all directions. Platforms are connected (for humans who need to use them) by ladders and staircases that sometimes resemble Donkey Kong levels more than real workspaces. And then you have entire levels with a common theme like a military junkyard or a uranium mine connected using portals that you need to unlock. It’s ridiculously easy to get lost. 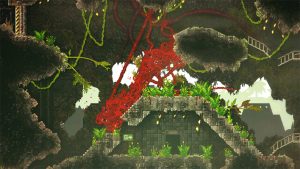 Your creature can send out an echo location pulse to look for new objectives in the form of those crevasses where you store your biomass and unlock portals. But the problem is that even the ones you have already found echo back to you. So it’s not a lot of help in finding your way. There was a point in the game when I was lost for almost 40 minutes. I looked through every nook and cranny but could not find a way to proceed. I nearly quit until I stumbled across a little pathway in the ceiling of one room that I had missed several times before. It would be really nice if Carrion would provide something in the form of a mini-map or at least a hint pointing to the next objective. 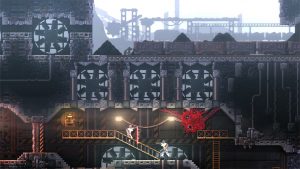 I had a great time with Carrion. It’s a unique game in a lot of ways, and being the monster in a traditional sci-fi setting is a lot of fun. If you are good, and don’t get lost too much like I did, you can win the game in about six hours of play. That makes it a good value for the discounted price it’s being offered for on Steam. Experiencing the unique experience of Carrion is worth the price of admission.

So go ahead and begin your rampage by painting the town red. Only you can eliminate those evil humans from the galaxy, one juicy bite at a time.