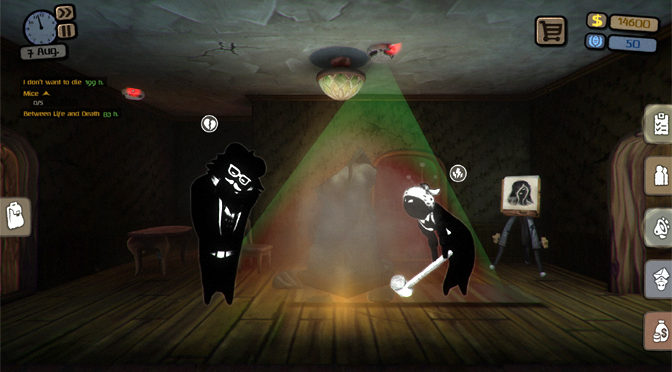 Beholder is a fairly unique game that draws constant comparisons to a game similar in vein- Papers, Please. In this game you are presented an incredibly depressing, dystopian environment where your character has to make difficult decisions that tend to hurt other people for the sake of your character’s safety and that of his family. You play as Carl, the new manager of an apartment complex run by a totalitarian state. Carl and his family move into the basement of this apartment complex, and Carl is also given experimental drugs that suppress his need for sleep so that he can monitor the occupants of the apartment complex constantly, reporting any infractions and doing all that is required of him by the Ministry of Allocation. So, will Beholder acquire your means of production, or should you save your dollars and watch the iron curtain fall? Let’s find out. 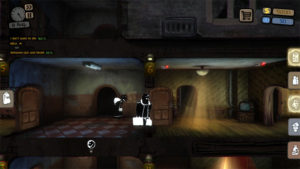 Beholder is a type of management simulation game: As Carl, you will accomplish tasks assigned to you by the Ministry, almost universally dealing with observing your tenants, and complete reports to send in for rewards. Observation is done quite simply: You can speak to the tenant to try and get information out of them, plant cameras in their apartments to be able to see what they’re doing, dig through their belongings, etc… Of course, doing the latter while the tenant comes back to their residence may wind up with them losing faith in you, potentially causing issues down the line.

There is a tutorial, thankfully, in Beholder, and the game starts off relatively slowly and giving you plenty of time. A particular residence is suspected of trafficking drugs, so you’re tasked with installing security cameras in common areas and in his apartment, and are to notify the Ministry when you see the illegal action occurring. The police come by, arrest him, and you receive your reward. This is among the few simple choices in the game- as many are wrapped in moral dilemmas, such as evicting or arresting a relatively upstanding couple for something simple or going through an elaborate plan to help them leave the country as fortune has really turned its back on them.

Notwithstanding, there aren’t just missions from the Ministry that you have to worry about. The tenants each have their own requests for you to do. Some are simple, some may leave you in a worse position than before you tried if you didn’t find the right solution ahead of time (one that’s fairly early on is a request that may rob you of $300 if you make the wrong choices, and this is during a time of the game when money is extremely tight due to other requests). Some choices, if ignored or not completed in time, will result in the arrest or death of a tenant or family member that could have otherwise helped you further in the story. 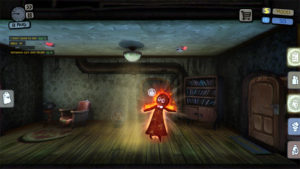 Each mission or request in Beholder has a time limit, usually a number of hours. The game starts off with easy to complete requests that you can take your time in fulfilling, but you’ll eventually reach a state where you’re given so many requests at once that you have to choose between shielding a tenant from the grip of an obviously tyrannical government, stealing all of their belongings in order to pay off your child’s hefty medical bills before it’s too late. Depending on how quickly or slowly you complete certain tasks, you may wind up being in a nearly unwinnable game state by a series of poor choices.

Come stay in Beholder’s murky world with a copy from Amazon!

The main difference between Beholder and games like Papers, Please is that Beholder largely acquires its difficulty from time pressure and multitasking- a vast majority of the time you’re being pulled in several directions at once. Sometimes events may crop up, without warning, that are nearly sheer cliffs in terms of difficulty spikes (one, in particular, requires an exorbitant amount of cash so high that unless you played nearly perfectly, you won’t have the cash or the proper way to circumvent the cost). These events are largely what shapes the replayability, as you’ll always know that you could do better if you can’t complete that one event and save that person in the building. 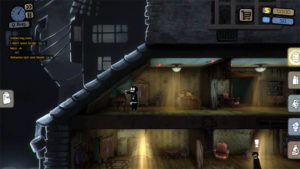 As the building manager, it’s Carl’s job to handle fixing up apartments when tenants move out, repair various furniture and appliances around the building, and more. If time is ticking down on a task that you haven’t yet completed (such as evicting a specific tenant) and you can’t find that they’ve done anything illegal, you can always purchase illegal paraphernalia and hide it in with their belongings. As a totalitarian state tends to do, random things will be declared illegal throughout the game that, if found, can be used to incriminate tenants if you want to blackmail them or get a reward from the Ministry. The things that are made illegal are truly random from a player’s perspective- apples, even crying are made illegal at one point or another in the game. Due to this, players are given quite a bit of leeway in how to accomplish tasks.

The first thing players should notice when starting up Beholder is that the game is visually striking: The graphics aren’t particularly impressive, but every character is a shadowed, nigh-featureless figure that still allows you to recognize which character is which through high contrast use of negative space. The visuals lend to the dystopian atmosphere very well, as the apartment complex itself always appears dreary… almost dire in appearance. The music pairs with this quite well, reaching dramatic swells when you’re caught sneaking into a tenant’s abode or when police arrive to arrest a tenant. Characters speak in a low-tone sort of babble, similar to how characters communicate in games like Banjo Kazooie. While it’s not as engaging as voiced dialogue, it’s significantly better than silence and still fits with the cartoonish themes of the game. 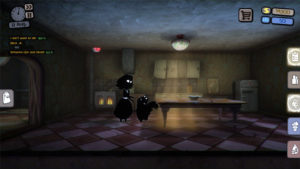 The Blissful Sleep DLC is a short little expansion to the game that offers more of the same. You play as Hector, the building manager who came before Carl, and the DLC sheds some more light on the individual stories of quite a number of the tenants, as well as the totalitarian state. It takes maybe four hours to get through, which is perfectly reasonable for a $4 expansion.

Overall, Beholder is a very entertaining game with excellent use of atmosphere and visuals to evoke a very dismal feel, and aggressive time management mechanics and multitasking to always keep the player busy doing a variety of tasks. Due to the level of flexibility players have in reaching goals and the sheer level of difficulty in handling certain tasks within the time limit, multiple playthroughs may be needed to fully experience all of Beholder’s content. Those who enjoy simulation games that repeatedly apply pressure on the player through time limits and moral quandaries will appreciate Beholder, while those looking for an action game or something more relaxing may want to try a different type of simulation style game.