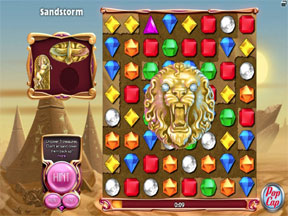 The latest in the Bejeweled series of games from Popcap is a worthy successor to the earlier versions. It continues to distract and entertain.

In fact, Bejeweled 3 does it so well that it’s easy for a player to lose themself in the game and to be swept along with the rockin’ rhythm and sound. Doesn’t that sound familiar? In both gameplay and game pacing, this might be the best Bejeweled ever.

This time around Bejeweled delivers the quality of play fans of the series can expect, but also so more. With more quests, puzzle levels and other add-ons that players have to earn instead of just getting through the normal course of the game, Bejeweled 3 takes the gameplay long-time players know and adds a compelling self-competition element.

The only way to unlock all the fun of the game is to continue to develop your skills and become a better Bejeweled player. That comes through concentration and commitment on the part of the player.

And the effort is rewarded. Sure, it’s great to earn badges, but the true joy in Bejeweled 3 is the new game modes and play options that are introduced.

That’s not to say that classic Bejeweled isn’t there, though. The game that’s cost countless man-hours of productivity in the workplace is still there, but it’s not alone. Players can now play in Lightning Mode, Zen Mode for the anti-lightning crowd, and a puzzle-based Quest mode. The quest mode is particularly innovative and falls right into the current trend of taking puzzle games and adding in an adventure element.

All the game modes offer various options and different forms of gameplay that will suit different player-types. It’s almost like getting several Bejeweled-like games in one package. For me, a mid-40s business executive, Zen mode with its emphasis on stress relief and breath modulation proved particularly entrancing.

There are other new tricks that bring to the front how much the game has evolved from its first version several years ago. Without giving too much away, I found both the Butterflies and the Poker aspects to be enjoyable and engrossing and I’d be willing to bet that others will find these and the other new modes just as fun. I really can’t recommend Bejeweled 3 enough.

Bejeweled 3 is the latest in a long string of high quality games from Popcap. It’s not like we don’t know what we’re buying at this point. What we always get is what’s promised: a fun way to distract ourselves in the workplace for five or 10 minutes at a time (when the boss isn’t around!).

Of course, here at gameindustry.com I *am* the boss so only John, Greg and the others have to worry about being caught out. But I can’t even get mad at them if Bejeweled 3 is their game of choice. It’s too good not to lose time playing.