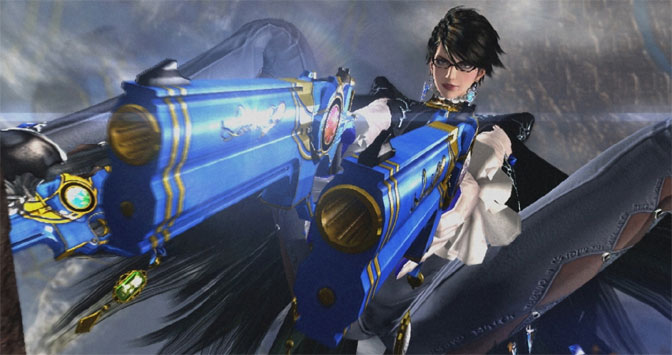 One of the most over-the-top and salacious protagonists in gaming is back in a brand new time-traveling story that will have you on the edge of your seat from beginning through to its climax… if for no other reason than because you’re wondering what’s actually going on in the story. Bayonetta 2, at least currently, is stacked as a one-two punch encompassing both the first Bayonetta and its sequel, the former even having brand new Nintendo-themed costumes to play as with a couple of them having some unique advantages. Is Bayonetta 2 the action game that Wii U owners deserve and need right now, or is it a bust?

Bayonetta 2 opens very similarly to the first iteration: A simple day of shopping is interrupted by a platoon of angelic warriors from Paradiso attempting to attack protagonist and titular character Bayonetta, as well as her previously discovered teammate Jeanne. Analogous elements would consist of poor Enzo is still being abused as well as Rodin’s main purpose in the intro is just to provide Bayonetta with her signature pistols. It is Christmas themed, however, which is a contrast from the graveyard prologue of the first game.

[amazon asin=B00DC7G1WE&text=Buy Baynotta 2 for the Wii U from Amazon now!]

After destroying a train, several jets and a significant amount of property, Bayonetta summons her trusty dragon Gomorrah to devour one of her foes, but something goes wrong and the demon wrests himself from her control, turning on Bayonetta and killing Jeanne in the process. This event sets the tone for the remainder of the game: A giant boss battle against a dragon that feasts on the divine, the entirety of said battle taking place while it scampers its way up a skyscraper, attacking you the whole time.

The story then moves quickly from there, with Bayonetta needing to go into Inferno to save Jeanne’s soul before its devoured by demons because that’s what happens to a witch that’s made a pact with them. Thankfully, this plot development lends to higher design variation among enemy designs, since you’re no longer just fighting divine abominations but…demonic abominations. An interesting note is that several of Bayonetta’s summoned attacks from the first game can be seen in various stages upon reaching Inferno, a couple of them even becoming obstacles or mini boss battles.

The combat in Bayonetta 2 is just as fast and frenetic as the first iteration, with some notable improvements all around. Combat is executed with a button for punches, kicks, firing your pistols, jumping and dodging. Performing many combinations of punches and kicks uninterrupted will result in powerful Wicked Weaves, which can stun enemies or eat large amounts of their life gauges. Of course, it wouldn’t be a good beat ’em up style game if you could do so undisturbed, so many enemies will attack during your combos forcing the need to dodge the attacks to avoid damage. Dodging with perfect timing will activate Witch Time, where your foes slow down immensely and allow you to attack consecutively without much fear of retaliation, and the use of dodge offsets to hold your place in a combo during a dodge will only further assist players in defeating the opposition. Getting hit not only takes off a large amount of health, of course, but it also reduces your magic meter.

In the first game, the magic meter you build up via combo attacks was really only used for torture attacks, which have the benefit of rewarding the player with more items or money when used. In Bayonetta 2, filling one whole magic meter gives players the options to use the Umbran Climax ability from the first game at will, whereas previously it was only available during boss battles. Umbran Climax basically allows the player to turn every attack during a combo into a Wicked Weave, dealing huge damage and knockback for a limited time. It can be extremely rewarding to see a flurry of giant arms, swords or even chainsaws decimating your foes’ health meters during a difficult fight, and players who build up their magic gauge and use it strategically can unload 2-3 Umbran Climaxes in a row to greatly assist in eliminating bosses and gaining good end-fight scores.

Bayonetta 2, as with the first, scores players on how well they do in each fight. Defeating enemies with a high combo count and a short amount of time will gain high points to get the coveted Platinum or Pure Platinum rankings for maximum rewards. Taking damage drastically reduces potential rewards, however, with oftentimes the reason between getting a Pure Platinum Trophy and a Gold was a measly mistimed dodge or two. Gaining high ranks in various difficulty settings will unlock things like new and unique accessories, so the replay value is definitely there considering there are four whole difficulties on which you can play.

Story mode, itself, is about 16 chapters long and can take anywhere from 12 to 16 hours to complete depending upon how much exploration players do in the stages. Each stage has a variety of hidden chests that will hold things like witch hearts, think of them like heart containers- collect 4, increase your maximum health, and moon pearls to increase your maximum magic capacity. Bonus stages called Muspelheims will be immediately familiar to Devil May Cry players since they are similar to secret missions. Muspelheims are essentially challenge rooms you can find across the stages that, upon completion, will reward players with the items to permanently increase max health or magic. Also strewn across stages are optional fights that will also yield rewards if players should seek them out, offering more chances to gain a high end-level ranking if desired.

Upon completing Story mode, 4 more missions called Witch Trials become available. Also, as players complete more of the story they’ll unlock stages to play in the game’s multiplayer mode called Tag Climax, where you and another player team up to complete abbreviated fights involving various combinations of enemies or replaying boss fights, with the option to bet against the other player as to who will do best by getting the best ranking. Though betting increases the difficulty of the battle significantly, rewards can be as high as 500,000 of the game’s currency per fight, making it very lucrative should you bet and win, perhaps even making collecting all of the various accessories and costumes from the shop less of a grind.

The multiplayer is a nice addition, but the largest reason why you’d play a Devil May Cry-styled spectacle fighter like Bayonetta is for the action and variation of combos that your weapons can provide, and there is definitely a lot more variety in the sequel when compared to the first game as a lot of the weapons felt the same in the previous iteration, which isn’t the case in 2. A gargantuan hammer, chainsaws and a strong whip weapon for crowd control are present, and some weapons excel at damage over time or have special effects like freezing the foes solid. There are weapons for a slow, methodical play style that deals large amounts of damage per hit, but also a variety for those who want to attack as much possible and chip away enemy health without having to commit to an attack and getting hit when making a mistake. Mixing and matching weapons to suit your play style or situation at hand, since several can be equipped on either hands or feet, is one of the most advantageous things a player can do during some of the demanding chapters or boss fights in the game.

Graphically, Bayonetta 2 looks amazing on the Wii U, due in no small part to the details of the characters, meticulously designed environments and special effects that will make your jaw drop, much to your chagrin during boss battles. Watching one of Bayonetta’s towering, summoned demons duel in the background with a summoned angel during the action of your own boss fight is an incredible sight. Less exciting are the camera shots focusing on the titular character’s crotch or backside, though the game and character seem to be aware of what the camera is doing to the point of calling out the cheesiest one-liners possible. On that note, the voice acting is professional, though similarly clichéd, while the music has an incredibly J-pop feel that goes well with how ridiculous the story, characters and gameplay are.

A lot of work was put into the lore of the Bayonetta series, a testament to this being the use of Enochian, a dead/invented language called the language of the angels, is actually the language of the angels from Paradiso. Rather than making up random sounds, pretending it to be language, it’s actually pretty unique that something this detailed was used in both Bayonetta games. Beyond that, there’s gratuitous sexuality, puns and innuendo galore which seems to precede the game itself. From firing guns spread eagle to spinning a time-restoring relic like a stripper pole to Bayonett’s hairlike-clothing vanishing during a Wicked Weave, there’s a lot in this game that can be a burden to those who play with young children watching, or perhaps even those with delicate sensibilities. More than likely you’ve heard about all of that already so it won’t be dwelt on here, but there’s a lot more to Bayonetta 2 than her clothing vanishing a bit while a ten-story high beast crushes a cherub in its mouth- but if the innuendo and sexualization in the first game bothered you, the second iteration does little different.

To summarize: Bayonetta 2 is a fast paced action game with a lot to appease beat ’em up fans, such as those of the Devil May Cry series. The game has gore, exaggerated body styling, innuendo and gratuitous poses and camera shots, galore: This isn’t a game to be played by a young child. Those who aren’t bothered by everything being so ludicrously over-the-top will find a lot of value in Bayonetta 2, as it comes with the first game as well, providing quite a length of play time. Bayonetta 2 is definitely a solid game for action fans, but it is definitely not a game for everyone.