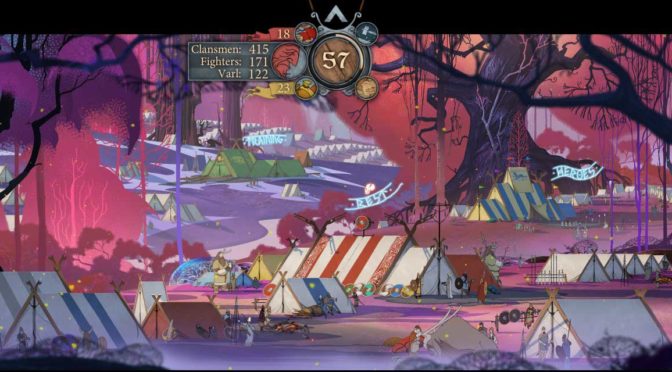 First, Stoic has listened to fans and given us more of the gorgeous animation, more impressive music, and more story, but most importantly, the team has upgraded the combat to make it more strategic and engaging.

The Banner Saga games aren’t long, but they really do feel like sagas. The story sees us switch between Alette or Rook, depending on who you choose, and the Varl, Bolverk, but there is no relief from the relentless gloom. And I mean that in the best possible way. Stoic delivers the most beautiful gloom you’ll ever experience, as things just turn from worse to even worse than you could possibly imagine.

Not only is the sun frozen, the gods are dead and there’s an impending, all-consuming darkness flocking this way, but the Dredge just keep on coming and, oh yeah, giant serpent of doom. When it comes to twisty turny plots, Banner Saga 2 has it all.

The most compelling part of the story concerns Bolverk, the Varl who cut off his own horns to make the handles of his battle axes. Wow – none more Norse. He’s gruff and strong and just wants to keep his gang ‘The Ravens’ safe, while making sure they get paid. However, he’s troubled by dreams, which seem to connect him to the Dredge. His only confidante is Folka, the shieldmaiden, who would like a little more from Bolverk than just someone to go into battle with.

The clever branching dialogue made me feel like I could shape Bolverk. Depending on my choices, I could make him a one-dimensional barbarian type, who meets everything with silence or barked orders. Alternatively, I could have moments of softness and vulnerability by saving some humans or sharing my thoughts with Folka. These layers to Bolverk’s character, means that by the end of the game, it’s his story I want to see resolved, as he becomes central to the plot.

Get Your Fight On

The main criticism of The Banner Saga was the repetitive nature of the combat. Once you’d seen one battle, you’d seen them all, but in act two of this saga, all that’s changed. New races and enemies add variety to the battles, as do speech ‘scrolls’ from characters reacting to stuff on the battlefield.

Most notable among the new races is the Horseborn, a Celtic-style centaur culture. That said, you don’t get to know much about their culture, other than they have no pronouns and think of everything in terms of the herd, which I liked. But it would have been nice to have more lore – perhaps The Banner Saga 3 will make better dramatic use of the Horseborn.

When it comes to combat, the Horseborn make things far more dynamic. Not only can they travel further than most, they also get a second move, after they’ve attacked, allowing them to get out of range. The Dredge also have new moves, with some insect-like creatures, which can cloak themselves, dealing damage if you step on a tile they are hiding on.

There are also more magic users, which means your strategy can be thwarted by a quick resurrection. Playing on ‘normal’ I found the combat much more challenging than it was in the first game, which was a welcome change. I actually had to think about my strategy and change it according to who I was fighting.

This time around there’s also a trainer, who doles out training missions to help you figure out how to use your fighters to best advantage. I struggled to complete these, due to a bug, which meant the poet disappeared from my fighters roster. But it wasn’t a game breaker, so I just ignored the trainer and trudged across the beautiful landscape.

The Banner Saga 2 delivers several gasp out loud moments, which is a testament to its writing. The game is a series of choices, one piled on another, in a world where nothing feels like the right answer because hope is a faint glimmer from yesterday. The burden of leadership weighs heavy and you find yourself wondering if you’ve made the right choices. And then you press on across the snowy plains, still looking for hope, but fearing that it’s a luxury your caravan can ill afford.

The Banner Saga 2 is one of the most beautiful games ever made, added to that it tells a mournful epic of a tale with engaging characters and rich lore. The combat this time around is satisfying,  but may not engage devoted strategy fans, however, I urge everyone to play it. If you want to  be immersed in a rich fantasy world for 10 hours, then dust off your axe and answer this call to battle.

One thought on “Beautiful Storybook Battles With Banner Saga 2”