In 2014, and later in 2016, the original Banner Saga was released to resounding praises. With its excellent story rooted in Viking mythology, well implemented tactical gameplay, and uniquely beautiful art style the original Banner Saga proved an excellent start to the series. Banner Saga 2 doesn’t fail to hold up and exceeds the expectations set by the previous title. Of course, if you played the game on the PC, you already know that, where it earned 4.5 GiN Gems out of 5.

When gamers learned that developer Stoic was porting the game over to consoles like the Xbox One and PlayStation 4, plus to mobile platforms by way of the iOS and Android, many were delighted. It’s rare that such a beloved PC game makes it way to consoles, much less mobile.

But Banner Saga 2 certainly qualifies as a worth title for that honor. Flushed with such success, it’s possible that Banner Saga 3, which was fully crowd-funded, may come out simultaneously on all three platforms. We hope that is the case. After all, it would be bad form for Stoic to bring so many new players into the fold, only to have them forced to line up behind PC gamers again.

But on to this review, which is looking at The Banner Saga 2 on the Xbox One. We all know that sometimes ports don’t work out quite as well as we hope. Obviously, the game itself has proved itself. Check out reviewer Chella Ramanan’s Let’s Play showing how it all works in this hauntingly beautiful world.

Moving on to our console review, which took place on the Xbox One, we will do our best to avoid spoilers for new console players, but there may be a few. Banner Saga 2 kicks off only a short time after the ending of the original, with your choice of character the young and unproven Alette or the older but more experienced Rook. From that point forward you are set on a journey to deal with a coming darkness all while doing your best to keep your caravan alive and happy.

The story starts off a little slow, often getting bogged down in long combat sections, but once the game gets started it’ll have you hooked. However, it is worth noting that the story doesn’t carry the same heft and weight of the original, feeling much more like the bridge between one and three than a story all its own. That’s not to say it isn’t great or enjoyable, but it’s comparable to Lord of the Rings: Two Towers; it’s still great but it’s not the apex of its greatness.

[amazon text=Start your own Banner Saga with a copy from Amazon!&asin=B00K133CBU] 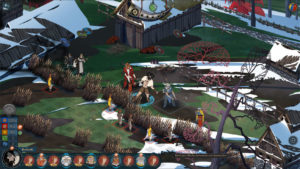 In the end, it sets itself up very well for a third and supposed final entry. Within that journey you will be forced to make important decisions that will affect the story and your caravan. These decisions create a somewhat dissonant response. While you’re engrossed by the game you will care and take time to ponder on your course of action, however, in hindsight some of these decisions often seem to mean little to the overarching story and its experience. While I would like my choices to feel like they were truly affecting my experience when you are in the heat of things these issues are often secondary in your mind. 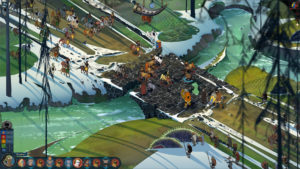 Speaking of the heat, Banner Saga 2 brings back the tactical chess like combat of the previous game and improves on it greatly. Characters once again have allotted movement spaces, the ability to extend their range at a cost, adjustable stats, and class based skills. New additions to the game include new classes, that ability to upgrade a character into a job advancement, and obstructions on the maps among other things. 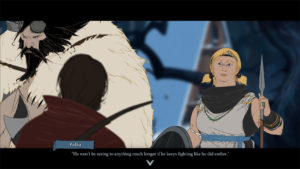 Gameplay, even on the easiest of difficulties, requires some level of tactical thinking; blindly rushing into a group of enemies or simply not effectively using your skills can result in painful results for you and your team. Enemies are often unforgiving and will pounce on the weakest link of your team if the opportunity is made available to them, giving you little room to make mistakes. However, once you get a hang of your team members and how to use them, there is little more rewarding than managing to take down a larger and tougher force with minimal to no losses. 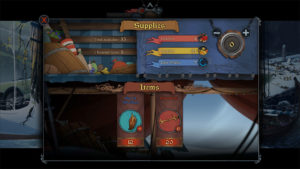 When not in combat, the system of resources and caravan numbers returns and unfortunately falls a little flat. While your caravan’s happiness and numbers do affect the gameplay to some extent, it really does feel rather negligible, especially late in the game. Often the only real worry about having supplies is in the case of one of your teammates gets injured and you need the required resources to heal them. Fortunately, this portion of the game, while a large part of your journey, is more than made up for by the beautiful path it occurs in. 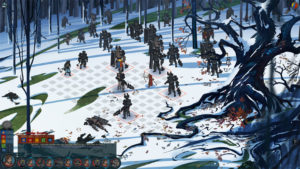 Once again, Banner Saga 2 is absolutely stellar in terms of art style, with fully hand-drawn, HD graphics on consoles, which look great on large screens. The game’s visual experience is awe inspiring from the forests of tree that look like waves to the simple way your banner waves and the way your characters move in combat. Characters are detailed and each carries their own unique look, while the, unfortunately few, animated sequences are simply great. Combat animations are fitting and still carry a very believable look, with sprites being detailed and fitting. 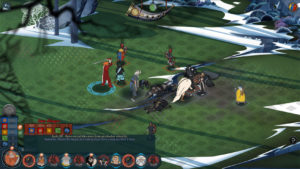 The sound side of things is just as stand out. Music is still just as wonderful, with the right touch of Norse and foreboding adventure. Whether on a multi-day journey through the hills or in the heat of battle, the music only elevates the scenes in which they occur. The sound design for weapons is fitting if not somewhat simple, but it is never a problem and often just adds more than it takes. Voice acting is still rare but when it occurs it’s done mostly well and with believable accents. The only real complaint might be that combat animations are repetitive, but that is a minor grief in a sea of greats.

The original Banner Saga was amazing and the sequel proves it was no fluke for those of us picking it up on the console platform. With proper advancement in gameplay, another excellent chapter in the story, and the still awe-inspiring art, Banner Saga 2 hits on all levels. While it does unfortunately feel somewhat like the in-between chapter, it is still one hell of a journey start to finish that is more than worth the twenty dollars it costs. In the end, I will be giddily awaiting the third and final entry in the Banner Saga journey.